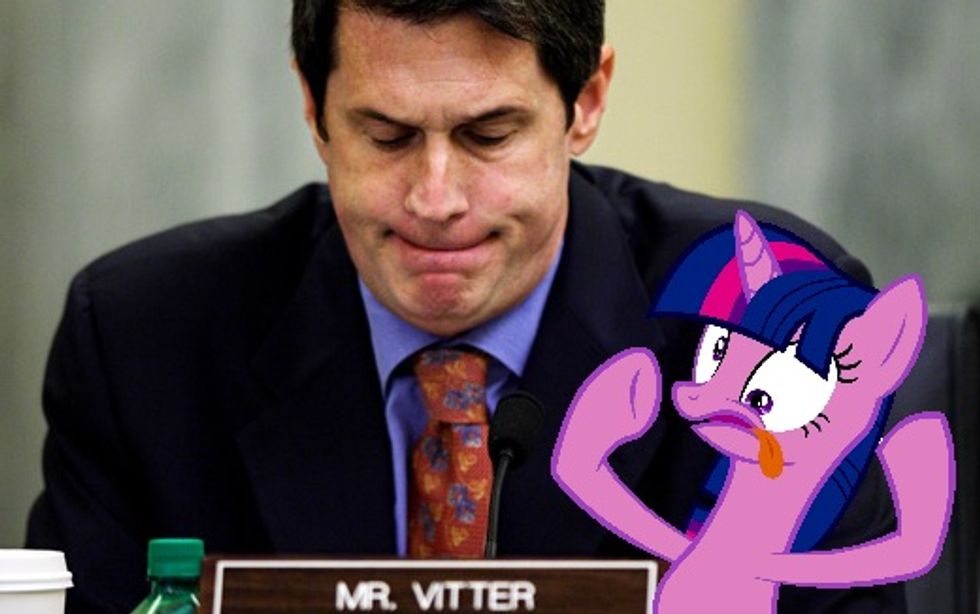 In a move immediately deemed "good for comedy," Sen. David Vitterannounced today that he will run for governor of Louisiana in 2015. Since Bobby Jindal is term-limited, Vitter will only have to run against less well-known Republicans in the primaries, and already has a pantsload of money to begin campaigning with -- even before the announcement, a pro-Vitter super PAC had already raised $1.5 million. Vitter has the built-in advantages of name recognition and popularity, but it remains to be seen whether he will be able to lie as creatively about state issues as he has about Obamaphones and senate staffers' "subsidies" for Obamacare. We bet he can!

Vitter's Senate term is not up until 2016, so he can run for governor without having to leave the Senate. His most prominent challenger in the GOP primary is likely to be Lt. Gov. Jay Dardenne, a moderate who says "I have a broad-based appeal beyond the Republican Party, I think," so he's probably toast. The chair of the state House Democratic Caucus, Rep. John Bel Edwards, has also announced his intention to run, and is already warming up with some running-against-Washington scales:

"In his two decades of being a politician in Louisiana and Washington, he's clearly only excelled in obstruction or division, and those are not qualities that are going to move Louisiana forward," Edwards said. "The do-nothing Congress that he's been a member of so long is not a model that we should follow here."

Nicely clichéd there, Rep. Edwards! Remember to say that you're happy to be here and that you're going to play the season one game at a time.

Vitter's involvement in the 2007 "D.C. Madam" prostitution scandal didn't hurt him significantly in his 2010 reelection campaign for the Senate, and seems unlikely to be a problem for him in the governor's race, either, because really, who hasn't been caught up in a prostitution case and revealed to have a diaper fetish? Vitter's wife has forgiven him for his "very serious sin," and he has some excellent ideas for shaming the poor, so he pretty much sounds like a shoo-in.