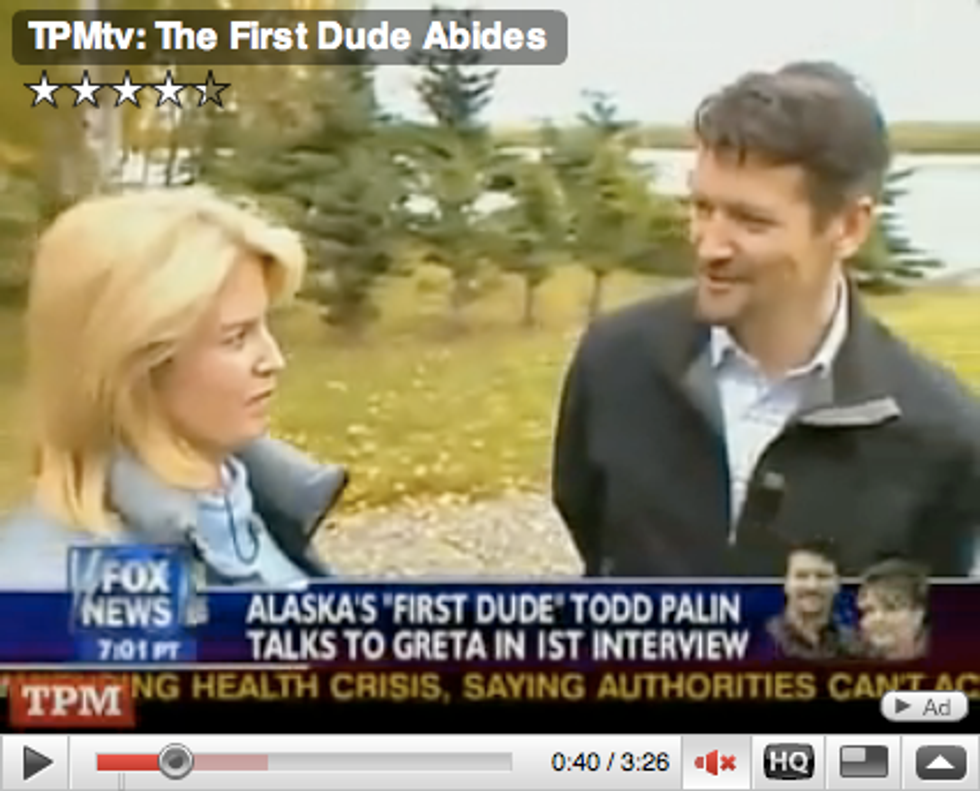 America's favorite newspaper, theNational Enquirer, has another gross scoop about political celebrities boning people they aren't married to -- this time it's "first dude" Todd Palin, who is accused of repeatedly banging a hooker who was then arrested for being a prostitute. How will Sarah Palin turn this to her advantage? Easy: Everything is already about Sarah Palin, to Sarah Palin, and this is probably more about (or, er, not about, but not about in a more "about way," personally) Sarah Palin than most things which are, in fact, only about Sarah Palin in her mind -- because she is a delusional narcissistic sociopath who, based on nothing but her greed and lust for cable-news notoriety, believes she should run the world. Anyway, Todd! Who knew, right? He looked so gay!

The newspaper of record reports:

While the story heats up on the internet, The ENQUIRER has uncovered official documents confirming the woman's arrest, and learned police have confiscated physical evidence that could tie Todd to an alleged extramarital affair.

We have also uncovered documents that show the woman contributed free massages to an anonymous person working for Sarah's campaign for governor of Alaska.

Haha we've been getting this same email the National Enquirer based their whole EXCLUSIVE on, and we just ignored it, because for fuck's sake we are so tired of the Palins. But, page views, right! Ching Ching! (That is the sound of a cash register, if such a thing even exists anymore, and not the sound of Rush Limbaugh making fun of how the Chinese president talks. Ha ha, Chinese people, what the fuck are they even talking about, amirite?!)

Sarah is going to make somebody write a very heartfelt "America My Heart Is Felt" blood libel bestseller about how fuckin' Todd wronged her, because she is actually a transvestite. [National Enquirer]