National Park Fees Could More Than Double, Depending How Much Ryan Zinke Skims Off The Top 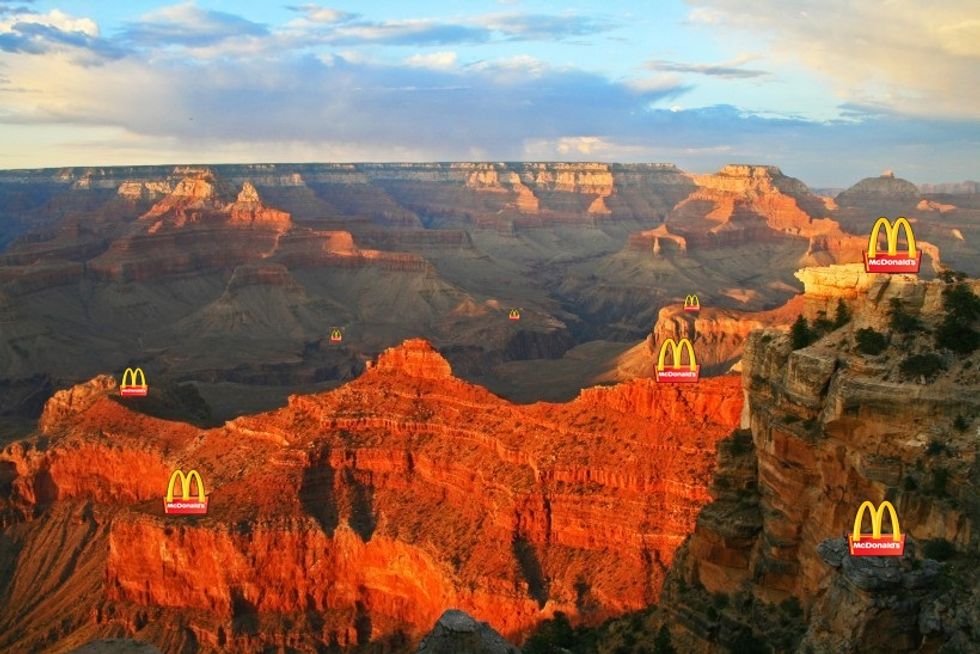 There may be some other revenue enhancements, too

Now here's a terrific idea! The National Park Service, facing an 11 percent budget cut as part of the overall Trump War On Nice Things, has proposed doubling the entrance fees for 17 of the nation's most popular parks, to pay for long-delayed improvements to park infrastructure. America is no longer a place where any random hippie should be allowed to visit the Grand Canyon, so per-vehicle entrance fees could go up to $70 during "peak season" -- each park's busiest five months. Current rates are around $25 to $30 depending on the park. But there'd still be some bargains out there under the proposal -- if you arrive on foot or bicycle, you could still get in for a mere $30 (up from $10 to 15), and annual passes allowing access to all parks would remain at $80. And since Congress has for years seen maintaining national parks as something that can wait for another time, there's no reason to think either house will step up to adequately fund park infrastructure, because there is nothing sexy about toilets in Yellowstone, although they're pretty goddamned necessary:

The National Park Service said the increase would help pay for badly needed improvements, including to roads, bridges, campgrounds, waterlines, bathrooms and other visitor services at the parks. The fee hikes could also boost national park revenue by $70 million per year, it said.

"The infrastructure of our national parks is aging and in need of renovation and restoration," Secretary of the Interior Ryan Zinke said in a statement.

118 of the 417 National Park sites in the USA charge an entrance fee. The fee increases would hit 17 of the most popular parks; the other 101 will presumably be unaffected for now, though Crom only knows their management could be farmed out at any moment to the Trump Organization or former Milwaukee County Sheriff David Clarke.

Since the federal government is still required by law to allow public comments, there will be a 30-day comment period on the Park Service's website before all the comments are ignored and the price hikes are approved. After that, it's only a matter of time before the inevitable follow-up investigation showing the infrastructure fixes will all be contracted out to companies whose owners just happen to be members of the Whitefish, Montana, coastal elite.

Advocates for the radical notion that you shouldn't have to be especially wealthy to enjoy the nation's natural heritage made exactly the sounds you'd expect from a canary in a coal mine before its last strangled note is completely disregarded. In a statement, Theresa Pierno, president and CEO of the National Parks Conservation Association, said while modest fee increases could make sense to help pay for infrastructure, this move is shittier than the Bright Angel Trail after the pack mules get several bad bales of alfalfa:

We should not increase fees to such a degree as to make these places -- protected for all Americans to experience -- unaffordable for some families to visit. The solution to our parks’ repair needs cannot and should not be largely shouldered by its visitors.

The administration just proposed a major cut to the National Park Service budget even as parks struggle with billions of dollars in needed repairs. If the administration wants to support national parks, it needs to walk the walk and work with Congress to address the maintenance backlog.

Pierno noted that a bill to provide sustainable funding for the parks, the National Park Service Legacy Act, would be a far better alternative, as if this Congress would pay for anything nice. Maybe it could be sweetened by adding funds to search for undocumented immigrants at the bottom of Bryce Canyon and to erect a plaque on the national Mall declaring Trump's inauguration the most highly attended in history.

Let us also not forget that the Park Service is simply swimming in money, since while the parks face hundreds of millions of dollars in budget cuts, Trump did donate $78,333 to the NPS (which he can write off as a charitable donation, you're welcome).

Wonkette is ad-free and funded solely by Readers Like You. Don't double your contribution unless you can!