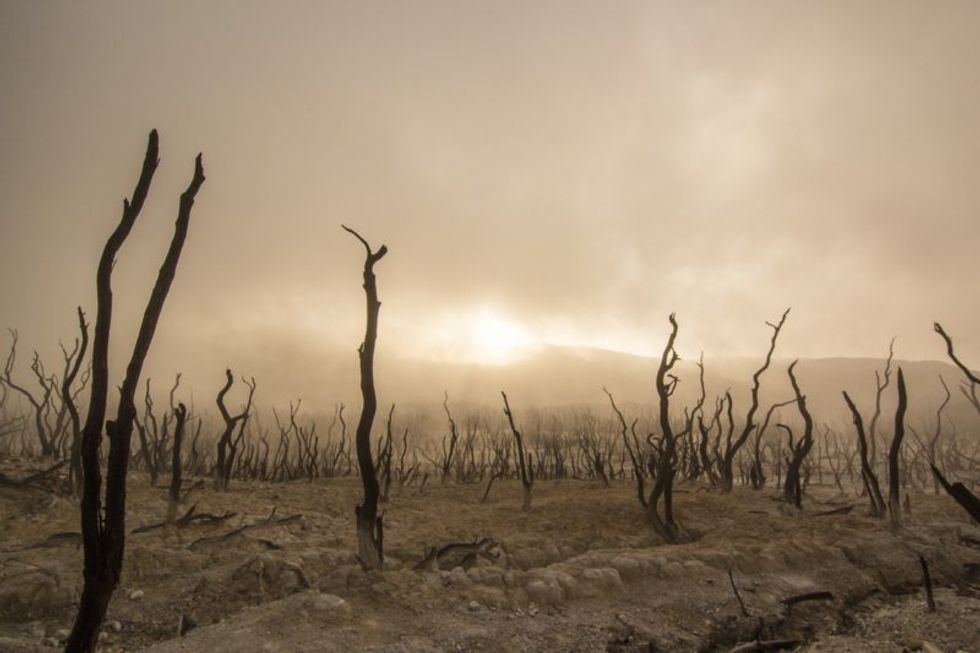 Nine of the 12 members of the federally chartered board that advises the National Park Service on policy just up and quit Monday, because Interior Secretary Ryan Zinke has not only completely ignored them, but didn't even allow the board to meet in 2017. Zinke, you see, froze all the advisory boards for the Interior Department in May, for "review," but never quite got around to approving most of them to do their jobs. Honestly, where's the problem? He's just making government more efficient by cutting out the main source of all the local input that he says he wants his department to respect. But once Interior is entirely dismantled and federal lands are sold to the highest bidder, then the public can talk to the new owners, or try.

The National Park System Advisory Board had, in the Before Times, advised the director of the Parks Service and the Interior secretary on parks policy, including the designation of national historical monuments and natural landmarks, as well as "the administration of the Historic Sites, Buildings, and Antiquities Act." In other words, a bunch of frou-frou liberal crap that doesn't create jobs like logging, oil drilling, or uranium and coal mining do.

One of the board members who quit, former Alaska governor Tony Knowles, sent a resignation letter to tell Zinke that advising the Parks System had been fun and all, especially up through 2016, the NPS's centennial, but he and the eight others who walked out Monday weren't crazy about serving on an advisory board that's not allowed to give any advice:

Knowles's letter also noted that the board had looked forward to briefing Zinke on some of the matters it had provided previous Parks Service directors and Interior secretaries, like

scientific research and mitigation of climate change; engaging young generations; evolving a more diverse culture of park visitors, advocates and employees; bringing our schools to our parks and our parks to our schools; stressing park urbanization; protecting the natural diversity of wildlife; and so much more.

Well there's your problem right there, buddy. There's no such thing as climate change, for one thing, and "science" can be taken care of by mining engineers. Schools are going to be privatized by Betsy DeVos, so if they want to go to a park, they can see if Disney World has coupons. And diversity, as everyone knows, is just another word for White Genocide.

Besides, Zinke hasn't yet designated anyone to head the National Park Service, so why have a board to advise an empty room? OK, not quite an empty room, as the Washington Post points out:

The board members’ action comes as one of Zinke’s top deputies, Doug Domenech, assistant secretary for insular areas, plans to move into the Washington offices that the National Park Service has occupied for half a century. NPS will be relocated elsewhere in the building, according to individuals briefed on the plans.

They're really busy over there anyway, so advisory boards would just get underfoot.

Of the 200 advisory boards frozen in May, it's not clear how many have actually been reviewed and allowed to start working again. WaPo notes that earlier in January, an emailed question to Interior spokesperson Heather Swift about the status of all those reviews brought the rather nonspecific reply, “Boards have restarted.” Swift didn't have anything to say Tuesday about the Parks board resignations.

At least Zinke has taken definitive action on two advisory boards. He abolished the "Wildlife and Hunting Heritage Conservation Council," replacing it with a body that gets the emphasis on guns, like the NRA wants: Now it's the "Hunting and Shooting Sports Conservation Council," which will emphasize "sport shooting" and also maybe give occasional attention to making sure public lands remain open to hunting and fishing. In fact, they opened up a few more! In the press release announcing the new panel, Interior's PR flacks touted Zinke's efforts on behalf of hunting and fishing, including his reversal of an Obama Administration "order that would have banned lead ammo and tackle on National Wildlife Refuge lands." MORE LEAD FOR EVERY MAN, WOMAN, CHILD, AND HERON, HOORAY.

Zinke also axed the "Advisory Committee on Climate Change and Natural Resource Science," and no, it hasn't been replaced, because are you joking?

Special favors? In the Trump administration? Shut the front door!

In other news, Ryan Zinke is getting slagged by the oil industry for his recent decision to close the Florida coast to offshore drilling. Sure, he's also getting flack from environmental groups and governors of states that don't have both a Mar-a-Lago or a Rick Scott running for Senate, but those complaints were expected. You just know that making Big Oil unhappy is tearing him up inside.