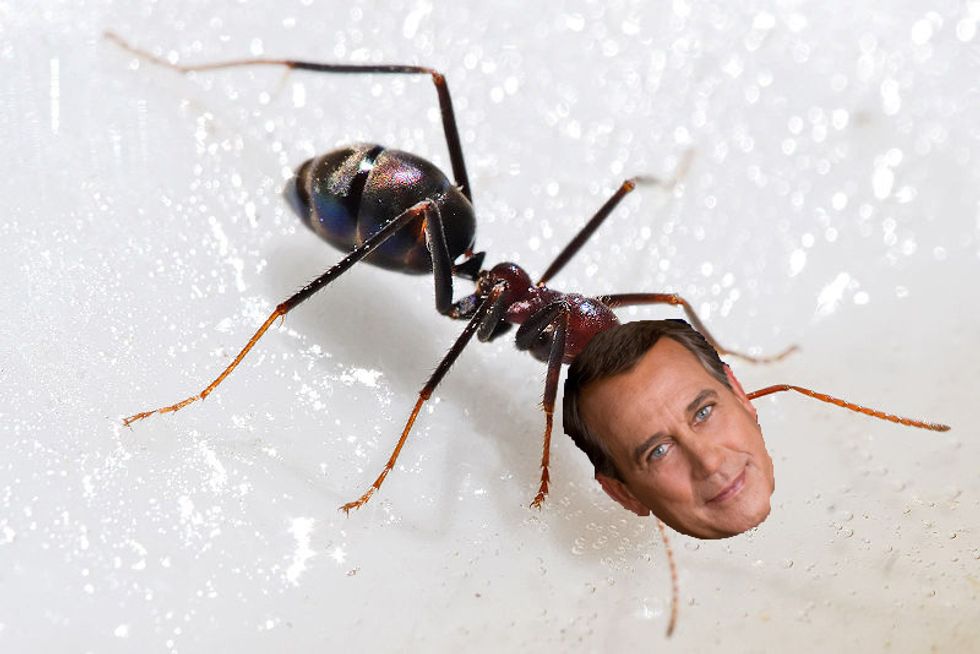 The Smithsonian's National Portrait Gallery has removed a video exhibit portraying the suffering of an AIDS victimbecause the Catholic League complained and John Boehner and Eric Cantor whined and threatened the institution's funding. The video in question features a bit of footage of a crucifix sitting on a pile of dirt and ants, some of which walk on it, because ants are EVIL. "I regret that some reports about the exhibit have created an impression that the video is intentionally sacrilegious," the Portrait Gallery said in a statement. "It was not the museum's intention to offend." Yeah, it's generally not the intention of anyone to offend! But it will happen, if enough people see a thing. And that makes it acceptable for the House Republican leadership to threaten censorship and bully art institutions.

This was all first brought to the fore by a person at CNSNews.com who saw that there would be an exhibition of gay and lesbian art at the Portrait Gallery and decided to go there and get offended at stuff. She also witnessed "Naked Brothers Kissing, Genitalia, and Ellen DeGeneres Grabbing Her Breasts," according to her very journalistic report, but it is this crucifix thing that somehow got the Catholic League going.

Then Eric Cantor made a disproportionate response, because he desperately wants to show evangelicals how much he loves them despite being a KNOWN JEW.

And incoming House Majority Leader Eric Cantor, R-Va., called it an "outrageous use of taxpayer money and an obvious attempt to offend Christians during the Christmas season."

"When a museum receives taxpayer money, the taxpayers have a right to expect that the museum will uphold common standards of decency. The museum should pull the exhibit and be prepared for serious questions come budget time,” Cantor said through a spokesman.

Yes, obviously this museum was making a plot against Christians and their holiday, because everything is always about them. These few video stills were a conspiracy to offend people! The Portrait Gallery just wants to offend people so badly!

It's crazy how when a crucifix is on the ground a few ants will walk on it! It is so crazy that this is probably currently happening with the approximately 5.7 trillion Jesuses and saints and other Christian figures people put OUTSIDE in their front yards or whatever. And you know what happens to Christmas trees at Christmas tree farms? Ants walk on those too! This is all VERY OFFENSIVE and a plot by the ants/Smithsonian to ruin Jesus's birfday party.

All art institutions should only be allowed to be curated by art-hating indignant monsters. That's what the American people want, and that's what House Republicans will give them. [Fox News]