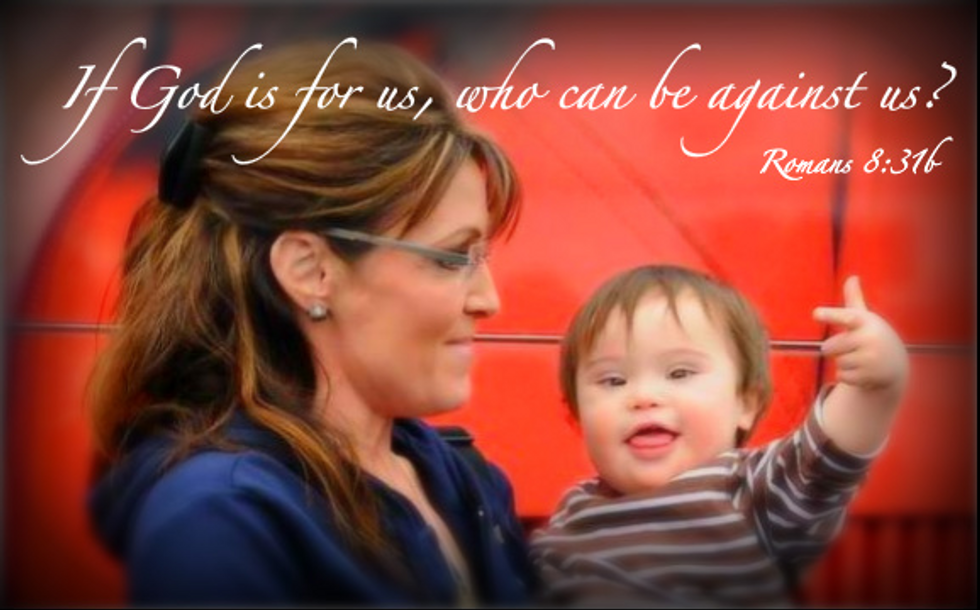 There is some sort of election thing happening today, but that's pretty boring because it's not a presidential election and it doesn't involve Sarah Palin. So today is really as good a day as any for theNational Review to begin picking Discovery Channel teevee host Sarah Palin's presidential cabinet, because her election to that job is pretty much a foregone conclusion or whatever; but they say Palin should announce this cabinet like right away, just in case anyone worries she would hire any fellow dumb people on her staff. "A conservative Republican unity ticket dedicated to restoring fiscal and economic sanity in Washington could, if played right, change history." It could! A dog sniffing a machine gun covered in bacon in front of a crowd of people could also change history, but a President Palin is slightly more likely to happen -- and it's fun to play dollhouse with her impending cabinet selections -- so the National Review has done this for all of the positions.

VICE PRESIDENT OF THE UNITED STATES

WHY: The strongest 2012 candidate right now is “Generic Republican,” and Mitt Romney is as close to a generic Republican as the world is apt to see: silver spoon, plain brown wrapper. He is the vanilla ice cream of American politics: nobody’s favorite, but nobody’s least favorite, either. Smart, decent, reliable. Good to have a guy around who knows how to read a balance sheet, and excellent to have one who has actually turned a profit as a profit-turning enterprise.

Mittens was once a "profit-turning enterprise," so he probably knows all of his times tables, and that will come in handy while running a country.

WHY: Because he will strike fear into the hearts of our enemies. Our friends, too.

Unnecessary provocation of other countries is a good way to complement Palin's steady hand and ease at relating with foreign nations. They will trust her intellect and capacity to understand their concerns, surely, but we wouldn't want anyone to think we won't nuke them at any second for no particular reason.

WHY: Because we need some steel in our spine on everything from border-control to straightening out TSA. Also, why should Tina Fey dominate all the wig-and-dress action in a Palin administration? Also, Rudy owes the world an act of penance after failing to run for governor of New York, leaving the field to Carl Paladino.

Yes, some steel in our spine, like the steel that fell on 9/11. Give the Homeland Security job to a former mayor who was on the job when the nation's worst terrorist attack happened. Is it fair to blame him for not stopping 9/11? No. But it's also not fair to say he should take charge of the country's intelligence agencies just because he happened to be around in a place where a terrorist attack happened. But the benefit of putting him on Palin's "team" is allowing her to say "9/11" constantly, which voters love.

Seems like a strong cabinet! This will definitely happen. Why can't we just let them take power now? [NR]