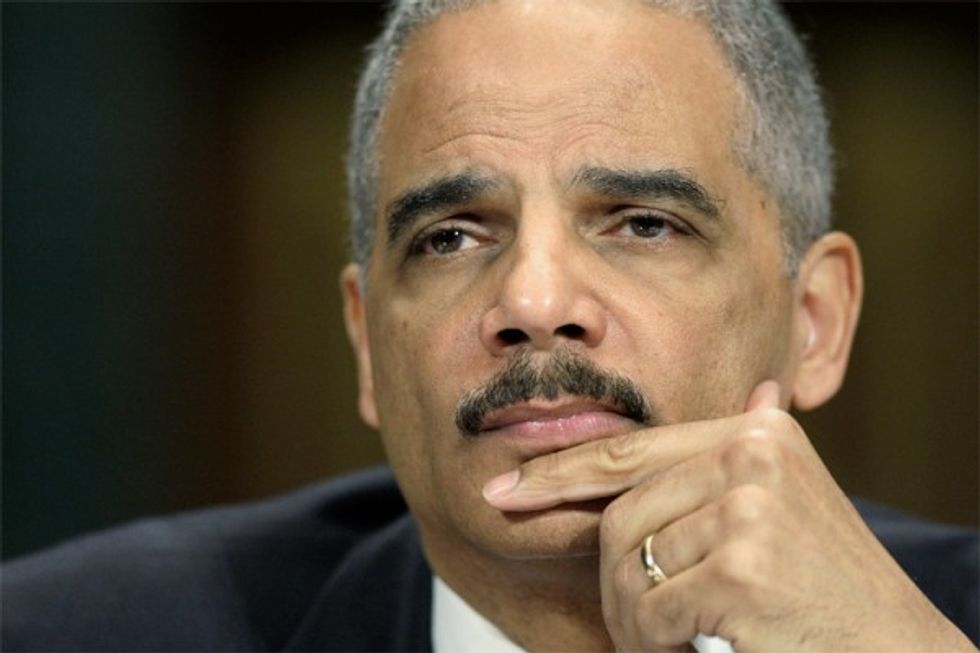 Eric Holder, who is kind of a jerk sometimes and is pretty great other times, is in some sort of lawsuit or something because Fast & Furious Ebolagate Solyndraghazi. But did you know he has claimed he shouldn't have to turn over in discovery some emails he sent to his wife?National Review Online knows, and they are all like "we will parse this legal mumbo jumbo and wonder what kind of exemption from discovery he could possibly be claiming, blah blah blah lawyer thing, we're boring."

How about we just apply Occam's Razor, people: Maybe Eric Holder would rather you not see him while he is word-fucking his wife?

NRO does not concede that maybe Eric Holder was word-fucking his wife in the dozen emails he would rather not turn over to ... Darrell Issa we guess? Like we are going to bother looking it up. Instead they are like, here, have a Sominex:

In Judicial Watch’s FOIA dispute with the Department of Justice over Fast and Furious documents, there are some curious developments. The Department of Justice produced a so-called Vaughn index this week, which detailed the documents that had been withheld as exempt from disclosure under FOIA and explained, in brief detail, the basis for the withholding. This is standard operating procedure in FOIA litigation. What is hardly standard is that DOJ has withheld as exempt from disclosure maybe a dozen or so e-mails sent by Holder to his wife’s e-mail address. These documents are designated as exempt from disclosure under the “deliberative process” privilege, which protects the internal pre-decisional communications of the government. Thus, for instance, before an agency regulation is adopted, the privilege protects from disclosure all the internal communications of agency staff about the content of the regulation.

Still awake? US EITHER.

Let's muse on what the emails might have said:

“From now on, you will wear two-piece swim suits when on vacations.”

“I do not want to hear ‘no’ or ‘we’ll see about that.’ I want my fantasies to be with you. God has authorized you and you only as my partner for intimacy and that is what I want.”

Just kidding, that is not Eric Holder, that is Allen West, writing to his Penis Home from Iraq, where he was working out his hornytoad frustrations by torturing prisoners. Stay super-gross, Colonel West!

Eric Holder, you keep doing whatever, you're cool.