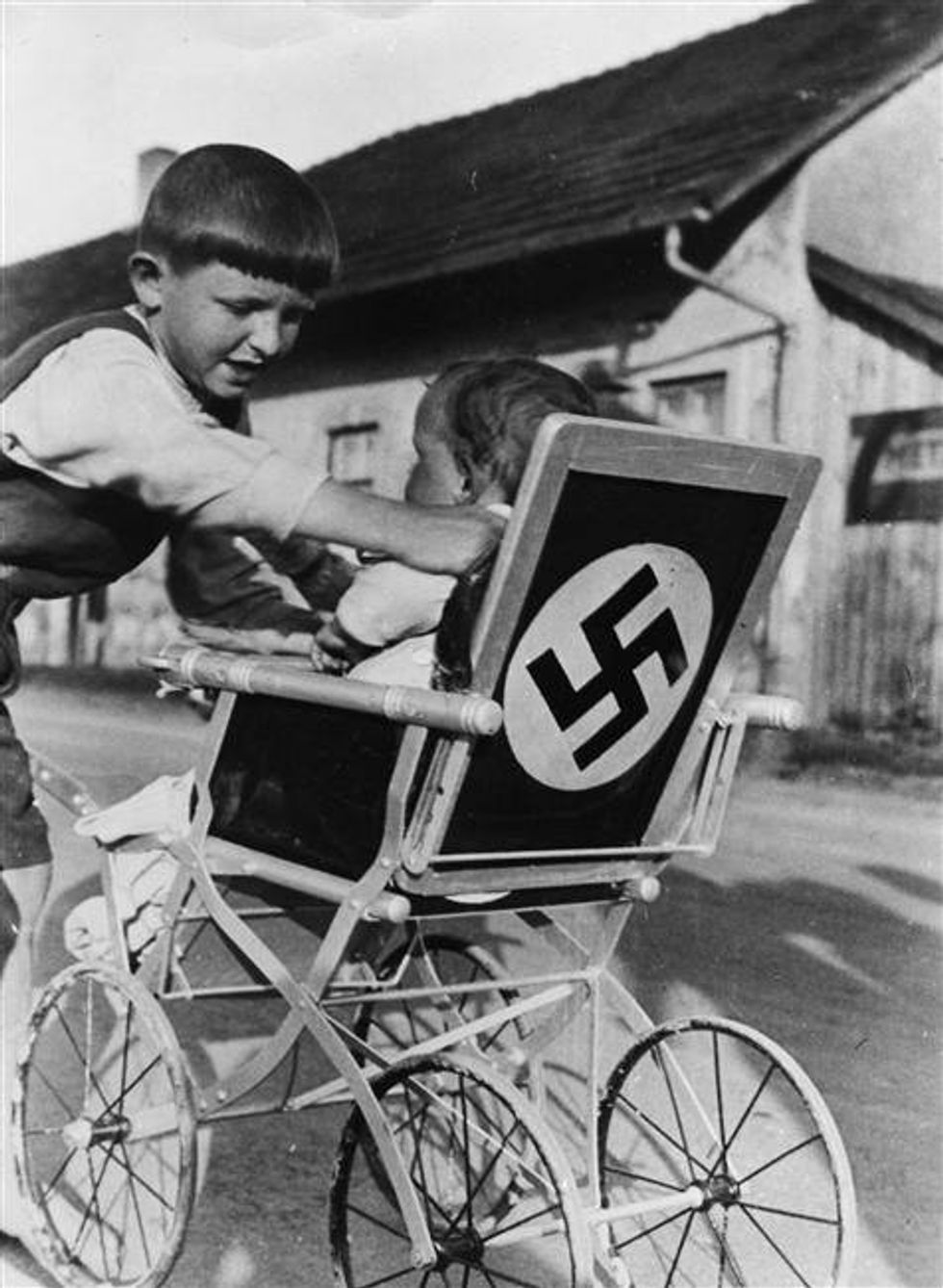 Heath Campbell, the neo-Nazi asshat whomade headlines a few years back when a supermarket refused to inscribe the name of his then-3-year-old son, "Adolf Hitler Campbell," on a birthday cake, is back in business being a free speech martyr, contending that his brand-new baby daughter, Eva Braun Campbell, was taken by New Jersey child protection workers immediately after birth because of his political beliefs. Campbell, who has nine children by five different women -- and has custody of none of them -- told the New York Daily News of his constant victimization:

“I’m not allowed to have children because I’m a Nazi ... That’s what they’re saying. Well, I’ll stop making them when they stop taking them.”

In reality, despite his insistence that the state took custody of his other children -- Adolf Hitler, JoyceLynn Aryan Nation, Honzlynn Jeannie, and Heinrich Hons -- solely because of his political beliefs, state officials have denied that Campbell's politics are an issue in his custody case; while privacy laws prevent release of family court details, a 2010 appeal of one case indicated that the children were placed in state care because of alleged domestic violence. But with the state unable to say anything about why the children haven't been returned, Campbell is free to say whatever he wants about his unjust persecution while he dresses up in his pretend Nazi uniform.

If Campbell's kids really were taken away because of his idiotic political beliefs, we would be ACLU Team Nazi Dad all over this, because even parents with terrible ideas have the right to be parents (with terrible ideas). But there's plenty of evidence (linked story is just sad as hell, and we won't summarize everything) that he's just plain unfit to be a parent, even if he belonged to the Unicorns Farting Rainbows Friendship And Brotherhood Coalition. New Jersey's Department of Youth and Family Services (DYFS) first had contact with the family not because of anything Nazi, but because they received "a complaint that the children were being strapped and confined for unusual amounts of time in child booster seats and that domestic violence occurred in the home," according to that appeals court document. Eventually Campbell and his wife at the time, Deborah, were both found to be incapable of providing a good home for their four kids, who were taken into state custody.

Campbell's newest child, Eva Braun, was taken from her mother, Campbell's new girlfriend Bethanie Zito, shortly after birth in Pennsylvania; once again, he claims that he is being victimized for his politics:

It sounds nice and free-speech martyr-y, but the reality is more sad and prosaic:

“If there is an assumption the child is at risk, they can do that,” said lawyer Michael Connor.

Even so, we can expect to hear a lot more about poor rightwing parents being victimized. Considering that there actually are plenty of neo-Nazis whose children are safe and sound at home -- because they aren't being neglected or abused, just getting their heads filled with claptrap -- you might think that victim stories like Campbell's wouldn't get much traction. Then again, you might also think that idiots dressing like Nazis and naming their kids Adolf would not be happening in this century, either.