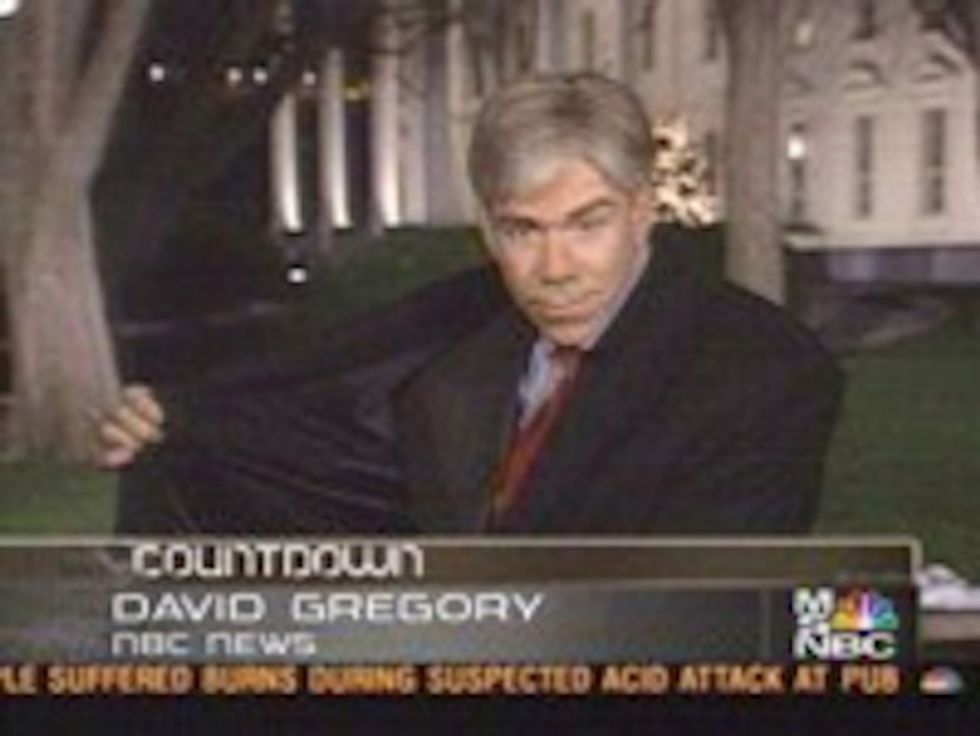 If you are a Reglar 'Merican person who has occasionally flipped to NBC's Meet the Press on a hungover Sunday morning, thinking the vapid tones of whatever panel of white men plus John McCain is appearing that day might somehow relieve your headache and nausea, only to find it worsened when you were compelled to throw things at your television and scream "THIS IS WHY WE CAN'T HAVE NICE THINGS!!!!" then you already know exactly what is wrong with NBC's has-been Sunday talk show.

Like every other Sunday morning talk show, it is, at best, the same rotating cast of a dozen or so professional beltway pontificators explaining how Democrats are like THIS, but Republicans are like THAT, with the occasional "some say" or "both sides do it" interruption from the milquetoast moderator -- in this case, David Gregory, who plays a Very Serious Journalist on the tee vee, even though he's really always wanted to be a dancer. Sometimes, he awakens from his half-coma enough to journosplain who is and isn't a JournalistTM, as defined by David Gregory. (It feels a tad superfluous, even malicious, to remind you once more than David Gregory was a back-up dancer to Karl Rove at the annual gathering of Very Serious Journalists Stroking Themselves Approvingly in Tuxedos, also known as the White House Correspondents Dinner. It is superfluous and malicious, but we just did it anyway because Jesus H. Christ, if you are a back-up dancer to "MC Rove," you do not ever EVER NEVER NOT EVER get to define who is and is not a journalist.)

If, however, you are NBC, you are apparently shocked and amazed that Gregory's show is getting its ass ratings-kicked by, among others, Pretend to Face the Nation, hosted by practically dead Bob Schieffer. How could this once great show -- and by once great, of course, we merely mean that it used to be the top rated show on Sunday when it was hosted by Tim Russert, who at least had a personality, plus a chalkboard -- no longer be revered or, like, watched? Time to call in A Expert:

Last year, the network undertook an unusual assessment of the 43-year-old journalist, commissioning a psychological consultant to interview his friends and even his wife. The idea, according to a network spokeswoman, Meghan Pianta, was “to get perspective and insight from people who know him best.”*

We're going to take a quick commercial break so we can all die of laughter. When we return, for those who managed to survive, we'll try to imagine exactly how this "consultation" works. Then we will die of laughter some more.

Aaaaand we're back. Thanks for waiting to call your doctor to ask if BigPharmaceuticalitis is right for you.

We have so many questions about this psychological consultation of Gregory's friends and family. Like, were they asked to look at ink blots? "Mrs. Gregory, what do you see when you look at this colorless blob? Besides your husband, that is?"

Perhaps there were questions about whether Gregory was breast fed as a child. Does he have daddy issues? Mommy issues? An inferiority complex that he will never be as respected as the ghost of Luke Russert's dad? Maybe he suffers from a debilitating case of athazagoraphobia.

These are certainly the kinds of questions that NBC should be asking to figure out why the heck no one likes MTP anymore. It should definitely NOT be asking if maybe it is because Gregory recently hosted a debate-but-not-a-debate between Actual Scientist Bill Nye and creationist conspiracy theorist and all-around batshit crazy person Tennessee Rep. Marsha Blackburn about whether climate change is real (it is) or a big liberal hoax (it is not) and dared to call it journalism. Nor should NBC investigate why its rather desperate attempts to make Gregory appeal to the Kids These Days On The Interwebs by not wearing a tie sometimes has not been such a success. NBC could explore the widespread rumor that Gregory is Awful Terrible The Worst at allowing his guests, especially -- totally coincidentally, we are sure -- his conservative guests to spew whatever stupid they want without actually challenging them on their "facts" or demonstrating even a kindergarten level of knowledge about, well, gosh, anything. (Although he learned Feminism Stuff from his mom and his wife, so it's sort of like he's an expert on that, we guess.)

It does seem sort of unfair to pick on David Gregory, when the truth is that all of his fellow Sunday show hosts are pretty much as sucktastically awful as he is. Same old white dudes asking softball questions of other older white dudes gets boring after a few decades or so. On the other hand, no one at CBS is yet calling in a dog whisperer to decipher why Schieffer is so goddamned boring with occasional moments of infuriatingly bad, so NBC sort of brought this one on itself. But who knows? Maybe the consultant will uncover the deep truths hidden in Gregory's subconscious, as understood by his wife and pals, to figure out the secret ingredient to making his show not suck. But we doubt it, because we're pretty certain that in addition to an antiquated format with the same ol' awful guests every single week, the secret ingredient to David Gregory's awfulness is -- spoiler alert -- David Gregory.

*Fun footnote: NBC is now denying that it hired a psychological consultant, and insists that it hired a "brand consultant," which is supposed to be not as absurd as hiring a head-shrinker consultant, but we're going to give the benefit of the doubt to the Washington Post reporter, much as it pains us to do that, just on principle, who says that he twice confirmed with NBC it had indeed hired a psychological consultant. We assume NBC will be hiring a crisis management consultant if this story continues.

If it's a day that ends in "y," it's a day you should be following Kaili Joy Gray on Twitter.