NBC Throws Out Beloved Black TV Hosts For Megyn Kelly, Is That Weird? 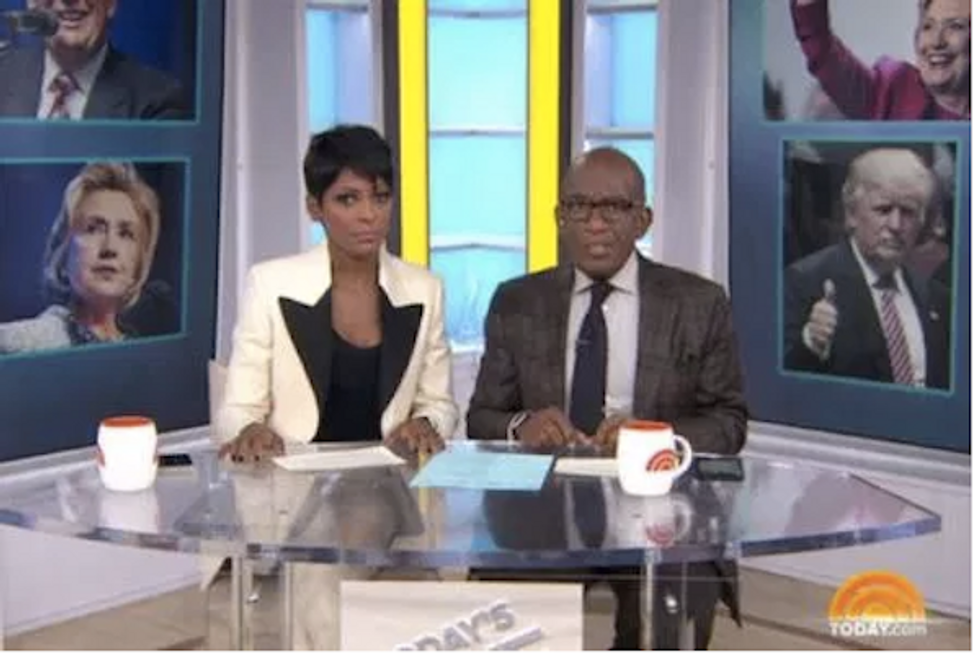 In case you had not yet heard, NBC is secretly replacing Today Show hosts Tamron Hall and Al Roker with none other than Megyn Kelly. You know! That lady who once yelled about how Santa Claus is white, and called Michelle Obama a whiny cupcake or something for being mad about racism?

Yes! Her! But, you know -- she's a total feminist hero now because she didn't like Donald Trump!

Although the move was announced on Friday, NBC still hasn't decided where they will place Kelly. They are canceling the third hour of the Today Show in order to afford her, and she'll either be taking over the 9 a.m. slot, currently hosted by Hall and Roker, or the 10 a.m. slot, in which case hosts Kathie Lee Gifford and Hoda Kotb will move up to 9am.

According to a release from NBC:

Kelly will become anchor of a new one hour daytime program that she will develop closely with NBC News colleagues. The show will air Monday through Friday at a time to be announced in the coming months.

As part of the multi-year agreement, Kelly will also anchor a new Sunday evening news magazine show and will become an important contributor to NBC’s breaking news coverage as well as the network’s political and special events coverage.

YEAH. NBC is about to become all Megyn Kelly, all the time.

The whole thing is kind of confusing, and maybe has something to do with Tamron Hall being in contract negotiations:

Hall’s contract is coming up and NBC News is in negotiations with her reps. According to the source, the media outlet hopes she re-ups, appearing on Today’s mothership 7-9 AM show, as she does now, while continuing to host her MSNBC show. Her reps say she wants to stay, our source reports – on the other hand, some news outlets are reporting she’s expected to leave when her contract is up, though that could fall into negotiation-via-press territory, in which case it would not be an industry first.

Al Roker is expected to stay on and continue his duties on the 7-9 a.m. hour, but not be a host in his own right. You know, because we all need more Megyn Kelly, and this is surely a very good look for NBC right now.

I do not watch the Today Show, but I would like to personally salute Tamron Hall, as I spent all of yesterday nursing a cold and marathoning her show on the ID Channel, which is a very good show in case you have not seen it.

This is not entirely surprising. As much as people like to go "OOOH! NBC is so liberal! Also, too, MSNBC! It's like they're practically mouthpieces for the Democratic party!" -- that is pretty much bullshit. Yes, Rachel Maddow and Chris Hayes are good, but NBC/MSNBC is not your friend, liberals. At least not when it is inconvenient. As you may recall, they went and fired Phil Donahue for speaking out against the Iraq War, saying that he would be a "difficult public face for NBC in a time of war." Donahue later stated that MSNBC's policy at that time was to have two conservative guests for every liberal one (and that he counted as two liberals).

Not to mention Chris Matthews, who was quite the Bush/Iraq War cheerleader in the early 2000s, as those of us with long memories recall.

Oh, and Greta van Susteren has been a particular piece of work since moving to the network.

Apparently NBC has yet to learn the lesson of the Obama Administration -- that no matter how hard you try to placate the Right, they still are not going to want to be your friend.