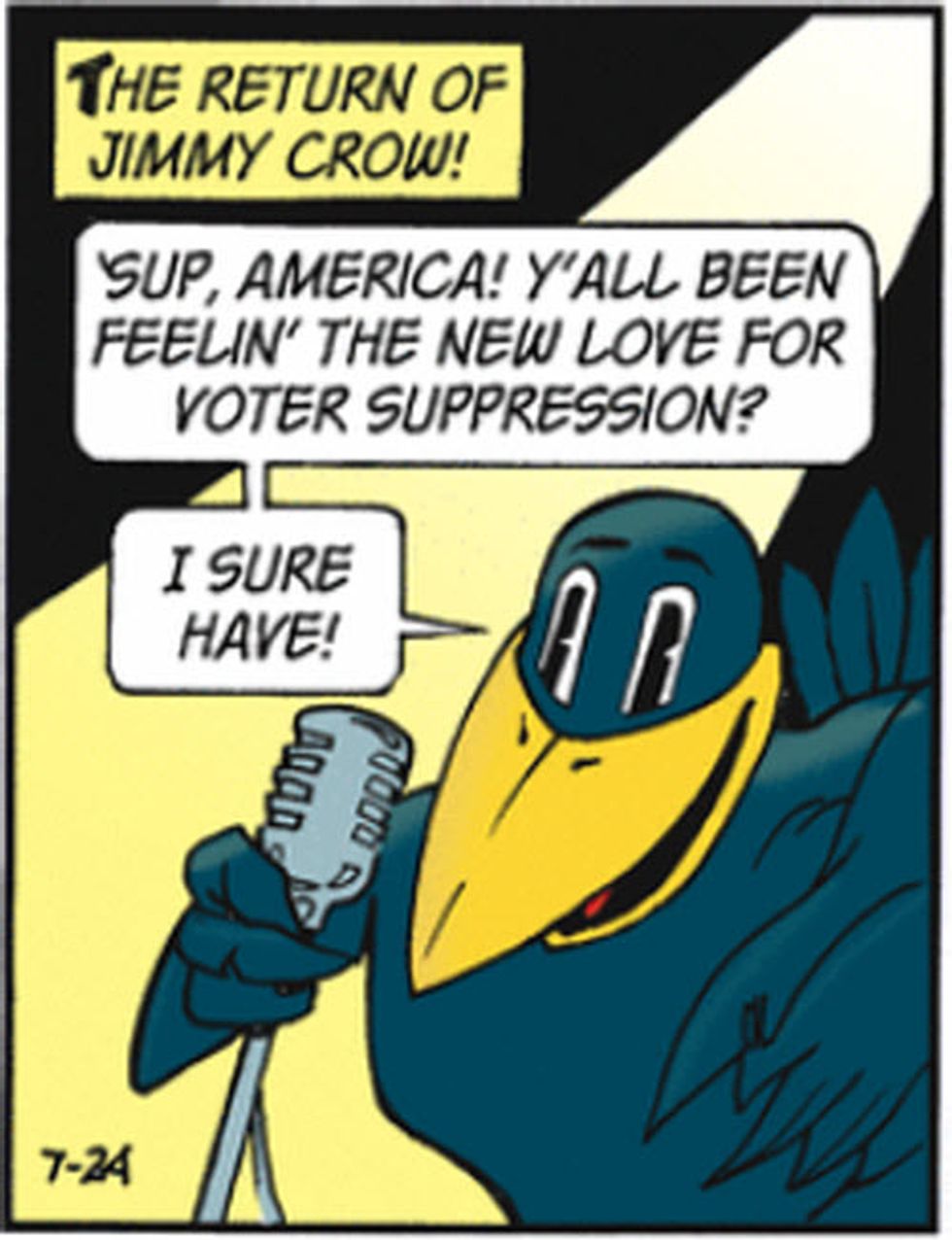 So we all know that the GOP is trying really hard to keep ‘undesirables’ from voting -- whether we are talking aboutyoungsters, racial minorities, or anyone who might be too poor to afford proper ID. (Thanks, SCOTUS.) But North Carolina Governor Pat McCrory (R-1950s) has come up with a novel way to disenfranchise minorities: just deny them a member of Congress! BRILLIANT, right? Rather than all the effort of suppressing voters and costs associated with weeding out undesirables, why not just straight up deny a majority-minority district their member of Congress for a year?

McCrory is doing just that with the seat vacated by Rep. Mel Watt (D-NC), who resigned in early January to head up the Federal Housing Finance Agency. McCrory is working the system so that the seat won’t be filled until after the November election, and his reason is simple: Congress sucks anyway, so no worries. Oh yeah, that’s for real his answer, and we don’t even have a joke for it because HOLY FUCK that takes some balls. Some seriously racist, 1950s-era Jim Crow balls.

McCrory went on one of those teevee political talk shows to explain his totally sincere reasons for neglecting representation to a district that has an overwhelmingly majority of minority voters for virtually all of 2014. MSNBC anchor Chuck Todd asked the question of how a governor could disenfranchise people for an entire year. McCrory, in all his smarmy glory, answered, per ThinkProgress:

McCRORY: Chuck, I’m sworn to uphold the constitutional laws of North Carolina, and I can’t change those laws between now and that election. And, again, I have to uphold the election laws, and I made a good decision — I think the only difference in any other option was about two months. And, Chuck, you know and I know that not much goes on in Washington between July and the election anyway, which is a sad commentary on Washington politics.

So they could have representation sooner, but that would be hard, and require effort, and the only beneficiaries would be the people of McCrory's state, but not the right kind of people, ya know? So yes, when a white governor disenfranchises almost a million people, most of whom are not white, the first thought that comes to our head is, ‘Golly, that is sad commentary on Washington politics.’ Our next thought is, ‘Golly, what racist bag of rat shit and cockroach entrails would be so despicable and awful as to pull those kinds of shenanigans.’

You can watch the video here:

As ThinkProgress goes on to note, Congress takes plenty of votes between July and the election. The end of the fiscal year is September 30, so there will have to be a vote to keep the government funded, which some Americans (not you, Ted Cruz) think is important. Also, with the nuclear negotiations going on with Iran, there could be international issues on which some people in North Carolina would care to have their voices heard.

Seriously, what kind of country would, as Chuck Todd says, “basically to disenfranchise nearly a million people, and not having representation in the U.S. House of Representatives, that’s — that is not a healthy thing. For a year. A whole calendar year…”

We couldn’t agree more, Chuck. Unless you are counting all the citizens who live in Washington, D.C., a majority of whom are not white, who have been disenfranchised for about 238 years. That’s totally fine and not worthy of any discussion on any major network ever. From those of us who live in D.C., we agree that McCrory is being a giant dick, and it sure would be nice if all tax-paying citizens could have representation in Congress.