Neo-Nazi Nerds Bitching About 'Star Wars' Again, Because Yoda Is A Rabbi Or Something 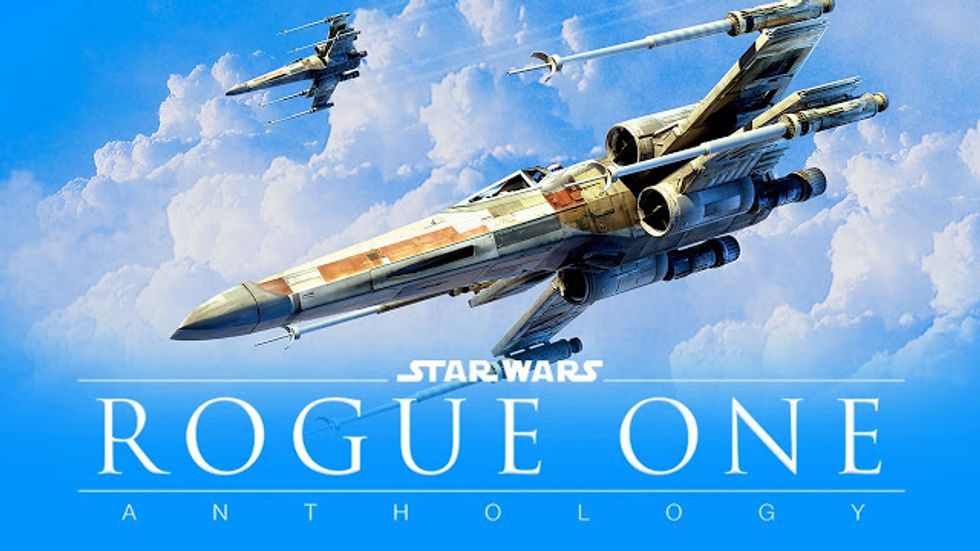 Notice how the 'husband' is all beat up! It is edgy.

Oh, dear, there are great big nerdfights on the interwebs involving the "alt-right" -- you know, the hip young neo-Nazis who are absolutely certain they run the world now that Donald Trump is king, and who think the height of transgressive humor is a drawing of Pepe the frog raping and dismembering a woman, because it really upsets those easily-triggered feminazis. We probably should not be writing about this at all, because we are such Cuck Snowflakes who need to run to our safe spaces, but we are willing to take on the topic for you, the Wonkette reader, even at the risk of some of these morons showing up in the comments and cutting us to crying ribbons by accusing us of being triggered cuck SJW snowflakes, ha! ha!

So what are the nerdfights about? The cancellation of a dumb TV show on Cartoon Network's late-night "Adult Swim" block of programming, and also the new Star Track movie, Rogue One: A Star Wars Story, which we understand is about how Dumbledore taught Harry Potter how to destroy the Dread Star. The online Nerdzis are unhappy with both of these things, because the cancelled TV show was sketch comedy that catered to the mouthbreathing "alt-right" (white supremacist) demographic, while Rogue One is Jewish propaganda that's encouraging white Genocide, just like last year's Star Wars: The Force Tries To Awaken But Keeps Hitting The Snooze Button.

So, about the TV show on Adult Swim: it was a short-lived thing called "Million Dollar Extreme Presents: World Peace" that ran for six episodes before Adult Swim shitcanned it earlier this week, mostly due to complaints from viewers, advertisers, and from within the network itself. Produced by a guy named Sam Hyde, the program was simply chock-full of the sort of amazingly clever humor that appeals to the denizens of 8chan and Reddit's r/the_donald:

Promotional material for World Peace winks at Hyde’s alt-right fans. “Celebrate Diversity Every Friday at 12:15A ET,” reads the tagline on the Adult Swim website. Press copy announcing the show promised that “World Peace will unlock your closeted bigoted imagination, toss your inherent racism into the burning trash, and cleanse your intolerant spirit with pure unapologetic American funny_com.”

We watched some of it (lucky you, it's not embeddable), and gosh it's hilarious, making fun of Social Justice Warriors and ugly transwomen with beards who want to have babies with big tattooed black men, literally cuckolding their emasculated white male husbands! So anyhow, now that it's been cancelled, there are many nerdfights, with Sam Hyde accusing Tim Heidecker, costar of another Adult Swim series, "Tim & Eric’s Bedtime Stories," of having stabbed him in the back. The show's cancellation resulted in the predictable wave of doxxing, death threats, and online creepery we've come to expect from the Flying Monkey Brigade, much of it aimed at Heidecker, who had nothing to do with the network's decision, but did say something really offensive and hateful and racist about the show's fans: "That audience is an issue." You can see why he needs to be prosecuted for advancing white genocide. Considering that "World Peace" looks to have been produced on a budget of about 15 bucks an episode, we'd imagine it will somehow struggle on in online form, albeit without the nice ad revenues of basic cable.

[wonkbar]<a href="http://wonkette.com/595107/white-power-morans-jews-stoled-our-american-star-wars-and-gived-it-to-the-blacks"></a>[/wonkbar]The other stream of WhiteBoy NerdRage this week concerns Rogue One, the Star Wars spinoff. A bunch of online whiteboys have discovered once again that the Star Wars universe is no longer the nearly all-white galaxy of the 1977 space opera, and gosh are they ever aggrieved about it, just like they were last year when a woman and a black person were the main characters of The Force Oversleeps and Gets Written Up By Todd The Assistant Manager. Samples of the poutrage from the White Power Rangers:

That last one even counts as pure #fakenews, pretending to be a screenshot of some unnamed news show's chyron, as if any news network would ever not have the network's logo plastered all over the place. There's even a fake news story to go along with it, a rumor that after the results of the presidential election, Rogue One's ending was allegedly reshot to insert an anti-Trump message of some kind, allegedly calling Trump a racist. Screenwriter Chris Weitz calls the rumor "completely fake," but of course he can't be trusted, because just look at his name, right? And so the Usual Suspects are doing the Usual Whining in their safe spaces on Reddit, complaining "They are brainwashing kids into hating white men [...] All the villains are white and all the ‘good guys’ are minorities and women." RawStory notes that some stupid Nazi site complained the first trailer for the movie was

“This film should be boycotted. Episode 7 was bad enough featuring that retarded storm trooper Negro and another empowered White female in the lead roles,” InfoStormer wrote, later adding “It looks as if the Jew run company of Disney is going to pump out as many of these awful multicultural Star Wars films as possible.”

As Marlow Stern mentions at The Daily Beast, the original Star Wars movies weren't exactly subtle about casting Nazis in a bad light, what with Darth Vader's helmet and the Stormtroopers' uniforms incorporating Nazi soldier motifs. Also, the name "Stormtroopers," duh. The AT-AT walkers in Empire Strikes Back were designed to look like something the Wehrmacht might have used, taking design cues from German World War II tanks. Just look at this mine-clearing Vadermobile:

[wonkbar]<a href="http://wonkette.com/597518/whiny-mra-jerk-babies-declare-victory-over-star-wars-your-saturday-nerdout"></a>[/wonkbar]We imagine the effort to boycott Rogue One will be every bit as successful as last year's boycott of Star Wars: The Force Is Narcoleptic, with a few hundred idiots staying away from the theaters, a few score tweeting about their great act of defiance, and some moron on a Nazi or MRA blog proclaiming complete victory while Disney counts its money.