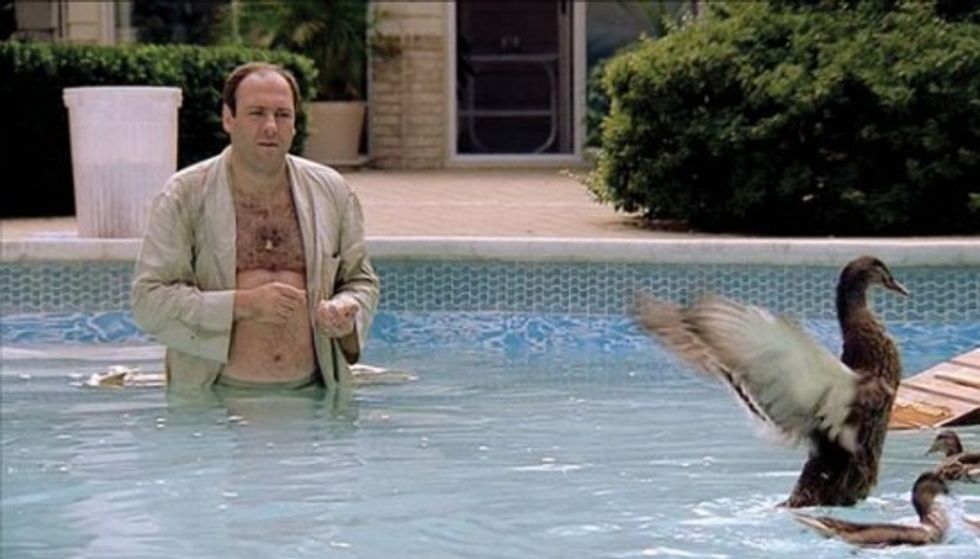 New Hampshire state Rep. David Campbell (D) hit and killed several ducks in the driveway of a hotel in Nashua last Monday; he has apologized for the incident but is unlikely to get a reality show out of it. TheNew Hampshire Union Leader Reported yesterday that Campbell was going about 15 miles per hour when he drove into the ducks:

A hotel guest told police that on arriving at the hotel by shuttle from Manchester-Boston Regional Airport, he saw bystanders feeding some 20 ducks near the hotel.

Campbell's vehicle soon turned onto the hotel access road, the witness said. The guest told the newspaper that after seeing Campbell's BMW sedan hit the ducks, he ran after the vehicle and snapped a photograph of its House-issued license plate.

The man also claimed that Campbell suggested to him the ducks should have gotten out of the way.

In an apology emailed to the paper Sunday night and printed today, Campbell seemed to dispute the claim that he had blamed the ducks for failing to get out of the way. It's just like that Japanese movie, Quackomon. Wonkette would never have reported on this story if he'd been a Democrat, of course.

Campbell has been questioned by police but was apparently not cited in the incident; his apology reads, in part,

"I am deeply sorry that I accidentally ran over several wild ducks near the Crowne Plaza last Monday night. This occurred while some people were feeding the ducks in the roadway nearby. I know it greatly upset them, as it did me. In spite of the accusations to the contrary, this was accidental, unintentional and deeply affected me then and now.

"I immediately got out of my car and apologized," Campbell continued. "However, one individual - who I later learned was Mr. James Murphy - was highly agitated and confrontational. He cursed, continuously yelled, and approached me in a threatening manner. After I parked my car, his aggressive behavior and threats continued. To diffuse a situation that was becoming increasingly hostile, I walked across the parking lot to my office building."

So far, there have been no calls for Campbell to resign, although several commenters at Gateway Pundit have very reasonably compared Campbell's hitting the ducks to abortion, because logic.