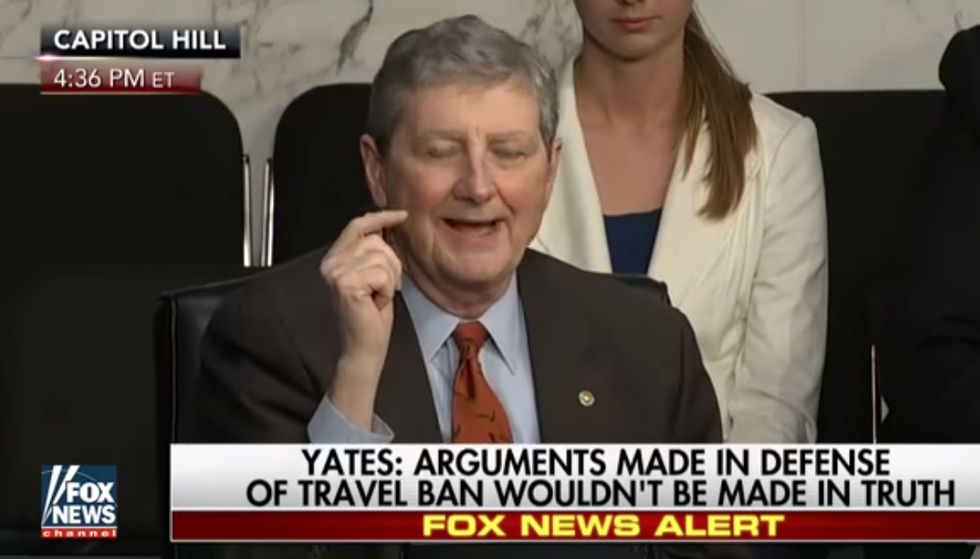 This a very subjective post, because EVERYBODY was a big loser in Monday's Senate hearing with former acting attorney general Sally Yates. Donald Trump, who fired Yates for loving America too much, was a yooooooge loser! So was Senator Ted Cruz, who ended up sobbing in a pool of his own Canadian tears after Yates rubbed the United States Constitution all over him in his questioning about Trump's Muslim ban. Also too, there was Senator John Cornyn who OWNED HIMSELF in his own questioning about the ban.

But in this post, we will decide to bestow the Biggest STAR Of The Sally Yates Hearing award on new Senator John Kennedy, Republican of Louisiana, whom you might not be that familiar with. We got mad at him during last week's James Comey hearing, because all his questions were like, "I'm brand new! Can I do some Hillary-investigatin'? I wasn't in the Senate when y'all were doin' that! I cain't? AW NUTS WHAT FUN IS CONGRESS ANYWAY?"

Monday, in front of Sally Yates and former director of national intelligence James Clapper, Kennedy let his dumb shit flag fly all over the place. First he wanted to know why Yates wouldn't support Trump's innocent little Muslim ban, which the hearing was NOT ABOUT. Here's why he needed to talk about that:

KENNEDY: I just want to understand your thinking from my perspective.

He wants to understand HER thinking, from HIS perspective. OK, Bubba!

Yates explained that she couldn't defend the ban from the perspective of "facts" or "Constitution," so she declined to do so. This confused F.N.G. Kennedy right nicely:

KENNEDY: OK. Suppose instead of an executive order, this had been an act of Congress. Would you have refused to defend it?

KENNEDY: But that was a political decision, was it not?

Because how could the Justice Department decide to be nice to gays, unless it was just being "political"? Sweet Jesus, this guy is smart.

Anyway, back to the Muslim ban:

KENNEDY: OK. But in your opinion, the executive order is unconstitutional.

YATES: I certainly was not convinced that it was constitutional, and given that I wasn't in the import of this, I couldn't in good conscience send Department of Justice lawyers in to defend it.

KENNEDY: So you believe it's unconstitutional?

CONSARN IT ALL TO HELL, WHAT IS THIS FAST-TALKIN' LADY EVEN SAYIN'?

Kennedy reassured Yates that he was not frustrated with her answers, but rather "happy as a clown," and then got to his REAL question, which was CONSTITUTION, HOW IN TARNATION DOES IT WORK?

KENNEDY: I don't mean to wax too metaphysical here ...

"METAPHYSICAL"? IS THAT THE WORD HE'S LOOKING FOR?

KENNEDY: ... but at what point does an act of Congress or an executive order become unconstitutional?

YATES: Well, it all depends on what the act does.

No, honeybun, deciding whether something is unconstitutional has very little to do with what the junior senator from Louisiana has to say about it.

KENNEDY: But at what point does a statute or an executive order become unconstitutional? Is it some a priori determination? It become -- let me - telling you what you I'm getting at and I don't mean you any disrespect. Who appointed you to the United States Supreme Court?

We bolded it because HE WAS YELLING AT HER. So not only is he stupid, he's a fucking asshole. Cool.

Yates responded as one might to an idiot who fell out of a turnip truck into the United States Senate literally yesterday:

YATES: I believe that it is the responsibility of the attorney general if the president asks him or her to do something that he or she believes is unlawful or unconstitutional to say so, and that's what I did.

BY GEORGE, HE GETS IT.

Kennedy then bothered everybody with some questions about how Russia has been trying to screw with our elections for years, before coming back to the REAL issue (in Donald Trump's head), which is people leaking mean things about Donald Trump to reporters. That led to this hilarious exchange with James Clapper:

KENNEDY: General Clapper, have you ever leaked information, classified or unclassified, to a member of the press?

CLAPPER: Not wittingly or knowingly, as I said in my statement.

CLAPPER: Well, unclassified is not leaking.

Thanks for all your contributions, John Kennedy. We can't imagine what this hearing would have been without you. Do you have anything to say for yourself?

KENNEDY: OK. Thank you, Mr. Chairman. I went over. I apologize.