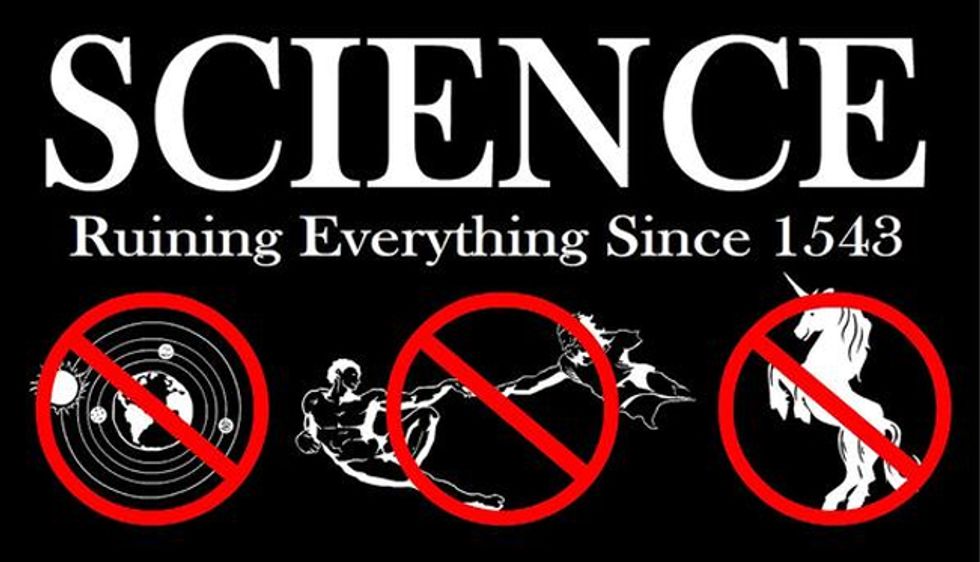 SUVs and Freedom are also in danger. Not to mention the very same thing.

A lot of your crazy wingnut attempts to make sure kids in science classes are unpolluted by too much science are just so thuddingly obvious -- they'll mandate the teaching of creationism and then get sued for violating the First Amendment, or razor pages out of textbooks to prevent teens from learning abortion exists at all, that sort of thing. But increasingly, the anti-science agenda is approached with a bit more subtlety, as we see in New Mexico, where the Public Education Department has issued some nifty new science standards (Word download) making K-12 science education a little friendlier to rightwing opposition to science without coming straight out and mandating that kids learn the earth was created in 7 days and is definitely not getting warmer because of coal. Andy Kroll at Mother Jones has the scoop:

The draft is based on the Next Generation Science Standards, a set of ideas and guidelines released in 2013 that cover kindergarten through 12th grade. The NGSS, which have been adopted by at least 18 states and the District of Columbia, include ample discussion of human-caused climate change and evolution.

But the draft released by New Mexico’s education officials changes the language of a number of NGSS guidelines, downplaying the rise in global temperatures, striking references to human activity as the primary cause of climate change, and cutting one mention of evolution while weakening others.

As long as kids are learning some science, do they really need to know too much about the stuff that might make their parents unhappy enough to call the school and rant about liberal indoctrination? Why should educators inflict every science fad of the last couple hundred years on impressionable minds, anyway?

Wingnut Mom Has Been To The Mountaintop! It Is A Very Stupid Mountaintop.

Oh darn. Someone has figured out that Democrats are totally RACIST against Trump supporters.

Glenn Branch, deputy director of the National Center for Science Education, which has long been one of the chief groups advocating for real science in schools, says the new proposed standards are "evidently intended to placate creationists and climate change deniers" and would "dumb down New Mexico’s science education." Which seems awfully judgmental of him. Bet he wouldn't let a Trump supporter even buy coffee because he's a BIGOT.

While school districts are still free to craft their own curricula, the state science standards provide a blueprint for what has to be taught. So if you eliminate the actual age of the Earth from the standards, that's now optional. Schools aren't actually being directed to teach that the planet was created 6,000 years ago just like in the Book of Genesis, but they won't have to say anything about it being 4.6 billion years old. Instead, middle-schoolers would only need to know that Earth has geology of some kind. The NGSS language that's been pruned is crossed out, and the replacement is in bold:

Construct a scientific explanation based on evidence from rock strata for how the geologic time scale is used to organize Earth’s geologic history.

Do high schoolers really need to know that "natural selection" is somehow related to evolution? Nahh, they'll get along just fine learning about "biological diversity," which should surely please liberals since they like "diversity":

Construct an explanation based on evidence that the biological diversity is influenced by: (1) the potential for a species to increase in number, (2) the heritable genetic variation of individuals in a species due to mutation and sexual reproduction, (3) competition for limited resources, and (4) the proliferation of those organisms that are better able to survive and reproduce in the environment.

See? New Mexico isn't going after science with a chainsaw -- they're happy, for now, to go at it with an X-Acto knife.

And then there's climate, which is always changing, and may or may not have anything to do with human activity, because who even knows, really? Here are the subtle edits, for junior high and high school standards respectively:

Ask questions to clarify evidence of the factors that have caused the fluctuation in global temperatures over the past century.

Analyze data and the results from global climate models to make an evidence-based forecast of the current rate of global or climate fluctuation and associated future impacts to Earth systems.

Also, just to be sure all sides of the science spectrum, especially the ones that keep state legislators in office, are covered, New Mexico will add a brand-new standard for science education in middle-school classes:

Describe the benefits associated with technologies related to the local industries and energy production.

What about the costs? Be quiet, that's not on the test and you don't need to know it.

The new standards appear to have been developed to please hard-partying Republican Gov. Susana Martinez, who in April vetoed a bill that would have adopted the unaltered Next Generation Science Standards.

Happily, there's still time for New Mexicans to stop this slide into stupid; the public has until October 16 to comment on the standards (MS-Word link), and the Public Education Department will hold a hearing on the proposed standards October 16 in the state capital, Santa Fe. Note: those written comments must be in by 5:00 PM, in wibbly-wobbly "Mountain Time," so it's entirely possible any written comments will actually go straight to the Bermuda Triangle, which is another Science Fact.

Yr Wonkette is supported by reader donations. Please click right here to help us keep bringing you Real Science from the Forbidden Zone.