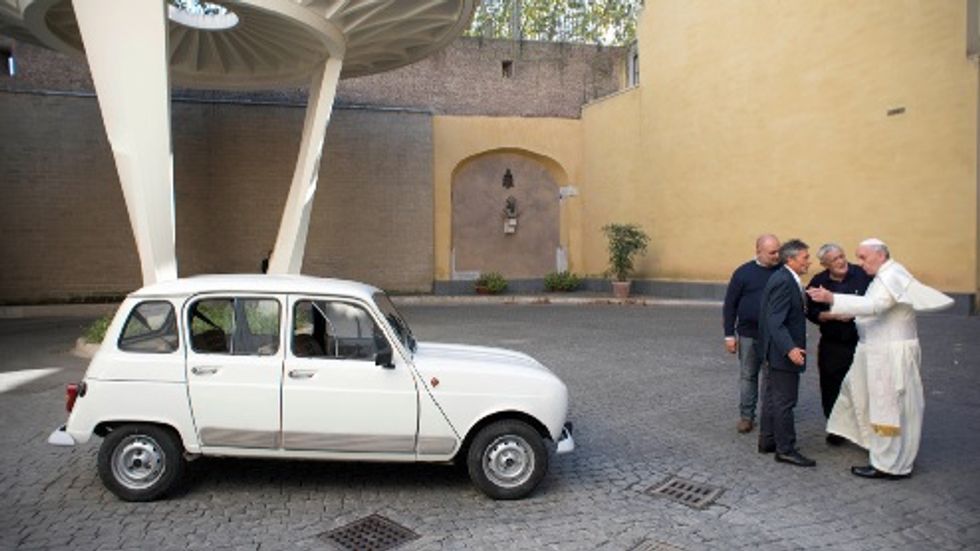 Dang it, New Pope, you just keep being awesome, and saying stuff that makes us think you actually understand some of that Jesus stuff. For instance, there's the letter published in the Italian newspaperLa Repubblica yesterday in response to some skeptical questions from its former editor Eugenio Scalfari. What kind of hellfire and damnation is this?

Expressing the belief that it was important for Christians to engage in "a sincere and rigorous dialogue" with atheists, Francis recalled Scalfari had asked him whether God forgave those "who do not believe and do not seek to believe".

"Given – and this is the fundamental thing – that God's mercy has no limits, if He is approached with a sincere and repentant heart," the pope wrote, "the question for those who do not believe in God is to abide by their own conscience. There is sin, also for those who have no faith, in going against one's conscience. Listening to it and abiding by it means making up one's mind about what is good and evil."

You keep that sort of thing up, and the Babtists are going to start accusing you of being a Unitarian or something.

The Guardian article also notes that New Pope's public statements leave Vatican officialdom doing some theological ass-covering with "he didn't really mean that" clarifications, like the time in May when

relaxed remarks during a homily, which appeared to imply that non-believers could be "saved" if they did good, prompted a swift clarification from the Vatican that he meant nothing of the kind.

The pope had had "no intention of provoking a theological debate on the nature of salvation", it said, adding: "They cannot be saved who, knowing the church as founded by Christ and necessary for salvation, would refuse to enter her or remain in her."

So who knows, maybe we'll be getting a similar "clarification" on this "hey man, follow your conscience, you know?" stuff as well. We'll admit we like fantasizing that conservatives in the Curia are filled with dread every time New Pope opens his mouth.

The other New Pope development is that he's taking his own advice about priests not driving flashy cars to new levels; he's apparently delighted with a gift from an Italian priest, Father Renzo Zocca, who

has given the pontiff his old Renault 4 which, all in white, is suitably papal and has 190,000 miles (300,000km) on the clock. Francis took a spin in it around the Vatican on Saturday.

"The security staff next to me were very concerned because they understood that from now on he'll be going around the Vatican in my car," Zocca told the Catholic magazine Famiglia Cristiana. "Anyway, I also left him some snow chains in the boot. You never know."

Friendly words for atheists and an affinity for beat up old cars? Pretty impressive, New Pope. Now, if you could have a chat with a couple of bishops here in America, and explain to them that you are not cool with what they've been up to, we would really be impressed.