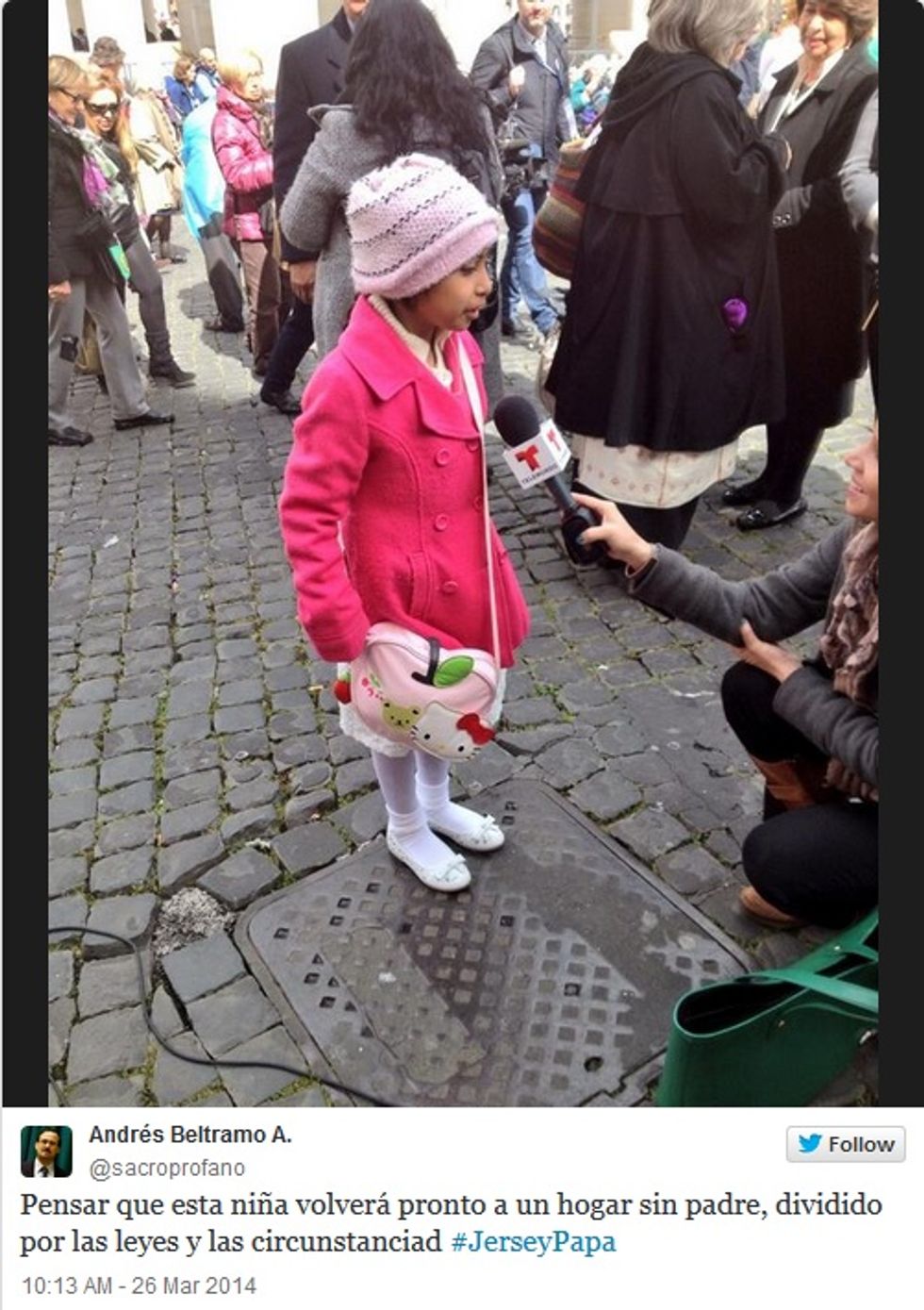 Here is a New Pope story that isn't so much about New Pope as it is about the way people think of New Pope. Depending on your personal ol' softy settings, you may want to have a hanky nearby. So what happened was that on Wednesday, the day before President Obama tried to convert Pope Francis to Kenyan Marxism, a group of immigration activists from several groups traveled to Rome and tried to get close enough to the pontiff to ask him to urge Barry Bamz to push harder for immigration reform, and especially to put a hold on deportations. They ended up nowhere near the area where Francis greets people in St. Peter’s Square. But one girl traveling with the group, 10-year-old Jersey Vargas, managed to squeeze through the crowd (or "throng," as one is obliged to call it in a story like this), so she could tell the Pope about her own family's situation (or "plight" -- again, obligatory): Jersey was born in the U.S. to undocumented immigrants and lives with her mom in the San Fernando Valley, but her dad was detained for driving without a license and now faces deportation. There was just one small problem with her plan to talk to the Pope:

But then, she was so overcome with emotion, she burst into tears when she got up to the pope. All she could do was hand him a napkin her mother had embroidered with two birds and the words, “nido de amor,” or nest of love.

“That napkin represented my family -- my mom and dad -- until they got separated. Their nido was destroyed,” said the girl[.]

Yeah, that's where we got a little weepy, too. So sue us -- we can't always be cynics, OK?

After not quite getting her message to Francis, Jersey "went back in tears" to her chaperone on the trip, Martha Ugarte.

“I asked her, ‘What did you say?’ She said she couldn’t say anything. She was crying and crying. And I told her you have to do it. So she found the strength and went back,” said Ugarte

And so she did, once again doing that thing where little kids can squeeze through crowds that seem packed solid. And this time, she managed to talk to the Pope:

“I told him, can he please stop deportations because my dad is in the process of deportation. And that it’s not fair. And other families are suffering the same thing.”

“After that, he blessed me, he gave me a kiss on my forehead. And he said (he was) going to meet with President Obama, to talk with him,” she said.

And that right there took some guts for a little kid to do, especially after that overwhelming first try. (Let it never be said that her emotions became a Jersey barrier. Really, that never should have been said.) Let's just all give this girl a virtual hug, OK? Good on you, Jersey.

The group that Jersey traveled with, the Full Rights for Immigrants Coalition, comprised members of several different organizations, and went to Rome with the support of Los Angeles Archbishop José H. Gomez. They also delivered a package of 1,300 letters from children of immigrants who fear deportation.

No word on whether New Pope mentioned Jersey's plea specifically when he met with President Obama, but the post visit press release from the Vatican did note that they discussed immigration reform.

We were going to reprint some of the stupid things people wrote to the OC Register complaining about the Archbishop supporting immigration reform, but then we found this tweeted photo of Jersey being interviewed by Telemundo and decided that was about a zillion times better than repeating what a bunch of nativist angerbears say:

(Tweet text: "To think that this girl will soon return to a fatherless home, divided by the laws and circumstances")

That's some kiddo. Here's hoping that she has the kind of future where "I talked to the Pope when I was ten" is just one of the first amazing stories she can tell.