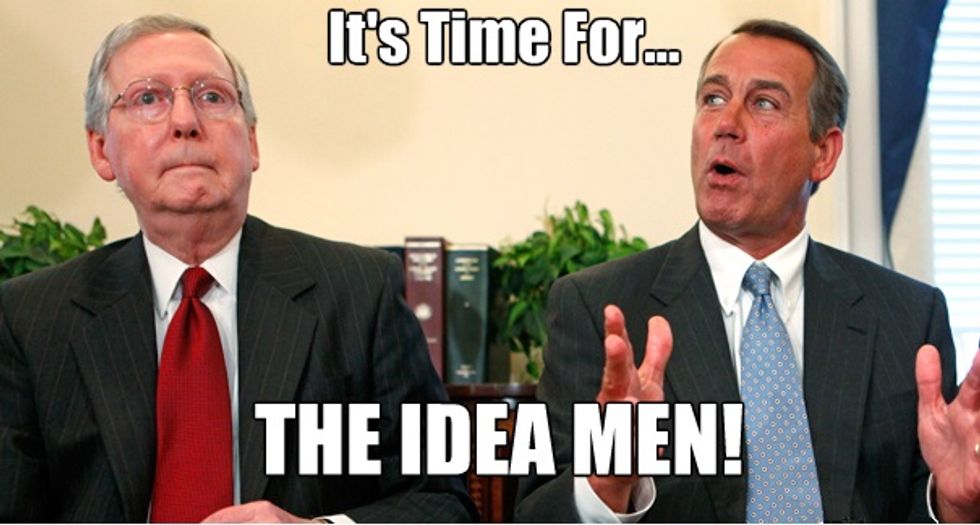 Back in November, Idea Men John Boehner and Mitch McConnell conserva-splained at America how they would fix Congress now that they'd won the midterms. These Bold, Robust Ideas were intended to unite the party and carry forward the Will of the People, who had Spoken in November.

But gosh darn it, the GOP just can't seem to get out of their own way, the lovable goofs. National Journal brings us this point-and-laugh about the GOP's ugly start to 2015.

House Republicans are leaving town after a rare six-week stint in session, one that was meant to unify the GOP conference around easy legislative measures. Instead, members of all stripes complain, they're heading home mostly empty-handed. [...]

Even with GOP control of both chambers, the Hill has sent scant legislation to the White House—neither bills the president can sign, nor measures meant to complicate Democrats' lives politically. So far, the 114th Congress has yielded just one Public Law: a measure reauthorizing the terrorism risk insurance program.

Yeah, but Speaker Boehner said we should judge them by how many laws they repeal, not how many laws they make, stupid Dummycrats, and don't even try telling us that passing a law and repealing a law follow the same process. They don't, okay? They just don't. It's called the Constitution, ever heard of it?

Now, after six weeks of backbreaking legislative labor, GOP members are headed back to the hustings with no scalps to wave in front of the clamoring hordes. They haven't repealed Obamacare, because obviously. They haven't decided how to fund the Department of Homeland Security, which drove Speaker Boehner to use language that's simply inappropriate in mixed company. And they didn't even save all the snowflake babbies, because the GOP's own women members were all like, "WTF, srsly? FOH."

The GOP needs to regain a sense of purpose, a sense of momentum, and a connection with the Forgotten Men who elected them. What they need right now is a folksy metaphor about sailing, because there is nothing more salt-of-the-earth than buying and operating your own goddamn sailboat.

"It's been ugly," said one conservative member, speaking anonymously to discuss internal conference dynamics. "It's kind of like we're an old rickety boat trying to get out of the dock. … It's been kind of ugly getting out of the harbor. We've bumped into some other boats. We hit our own dock once. … If we can just get to sea, then maybe once we start sailing, get that main sail up, it will be a lot smoother ride."

A much smoother ride, because everything always goes according to plan once you hit open water with a crew of mutineers. Yr Wonket wishes the S.S. GOPequod the best of luck in chasing down the white whale of Obamacare. The whalers win that fight, don't they?