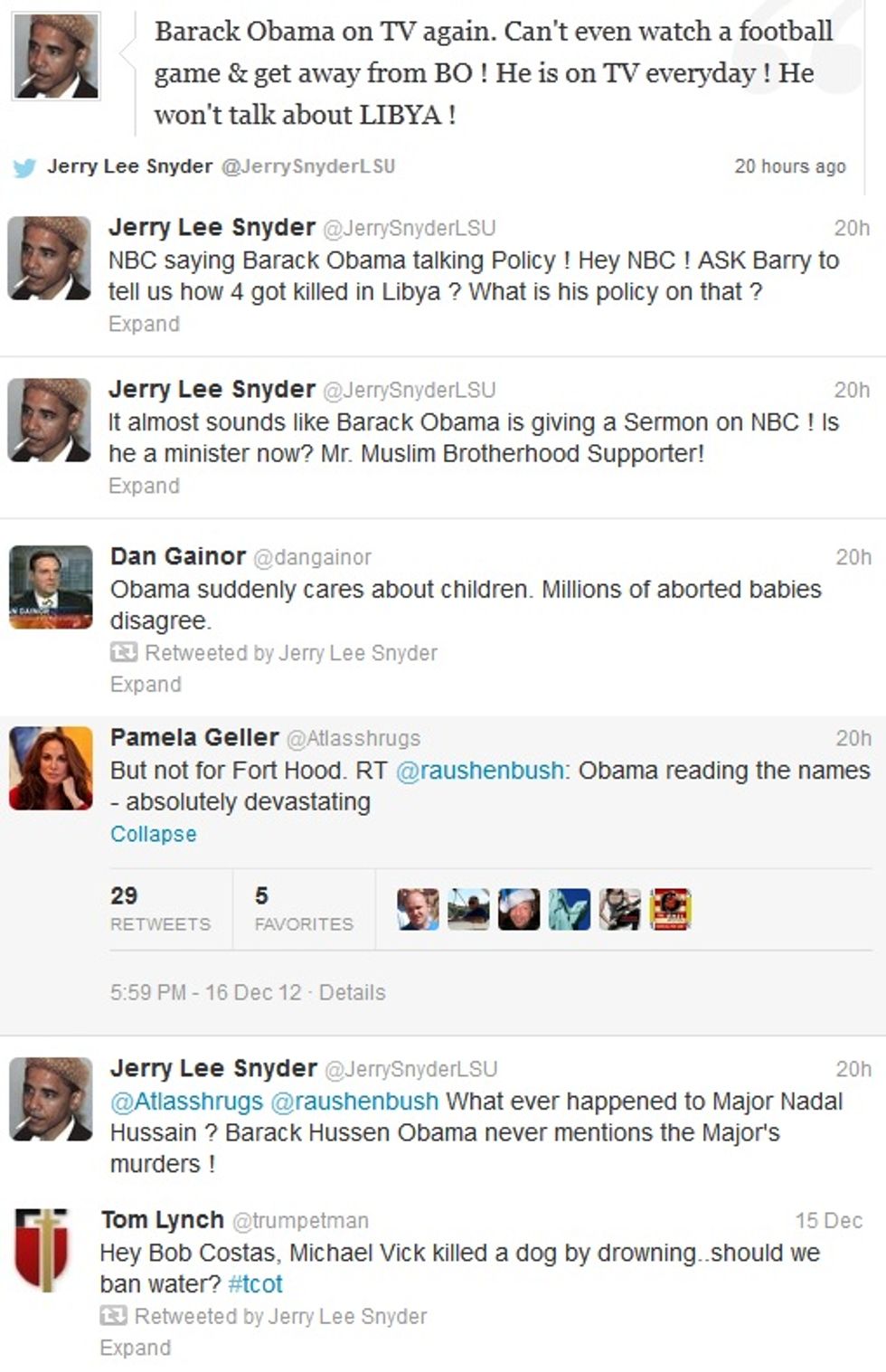 [Updated at 6:50 PM] At a prayer vigil for the victims of the massacre in Newtown, Connecticut, President Barack Obama, citing Paul's Letter to the Corinthians, urged a grieving nation,

“Do not lose heart. Though outwardly we are wasting away, inwardly, we are being renewed day by day.

Unfortunately, for some idiot NFL fans, what was unseen was a bunch of large men trying to give each other head injuries, and what was seen was a black man interrupting their sacred blood sport. Happily, they had the chance to share these thoughts on Twitter, and some 41 of their heartfelt cries of butthurt were collected by the sportsgawking blog Deadspin.

In addition to the people angered by the interruption of f'ball, at least three people were seriously angered that the commemoration of the deaths of 20 children and six school staff caused them to miss a substantial portion of a Fox Network cartoon sitcom:

And another gentleman took the opportunity of his notoriety to turn his Twitter feed into a clearinghouse for wingnut insanity, including re-tweeting Pam Geller's declaration that reading the names of the 20 murdered children was somehow hypocritical, since Obama didn't read the names of the dead at Ft. Hood on national TV:

Of the 40 accounts listed in the Deadspin piece, 21 of them were closed or set to "private" by late this afternoon. A few of the geniuses from the piece seemed genuinely pleased, or at least not at all embarrassed, to have their idiocy picked up by a widely read aggregator:

We await the breathless announcement from Breitbart.com that all of the tweets calling the President a nigger were actually sent by Democratic Party operatives trying to make opponents of the President look bad.

Here, by the way, is the speech that interrupted the sacred NFL game:

UPDATE: Somehow we missed this: the guy who posted the first message in the Deadspin article was a walk-on kicker for the University of North Alabama f'ball team. He has been kicked off the team for exercising his right to be an idiot in public.

Check out Wonkette on Facebook and Twitter and even on Tumblr. And if the silicon chip inside YOUR head is set to overload, Doktor Zoom is on Twitter, also, too.