New York Attorney General Tells Trump Foundation To STFU, Only All Legal Like 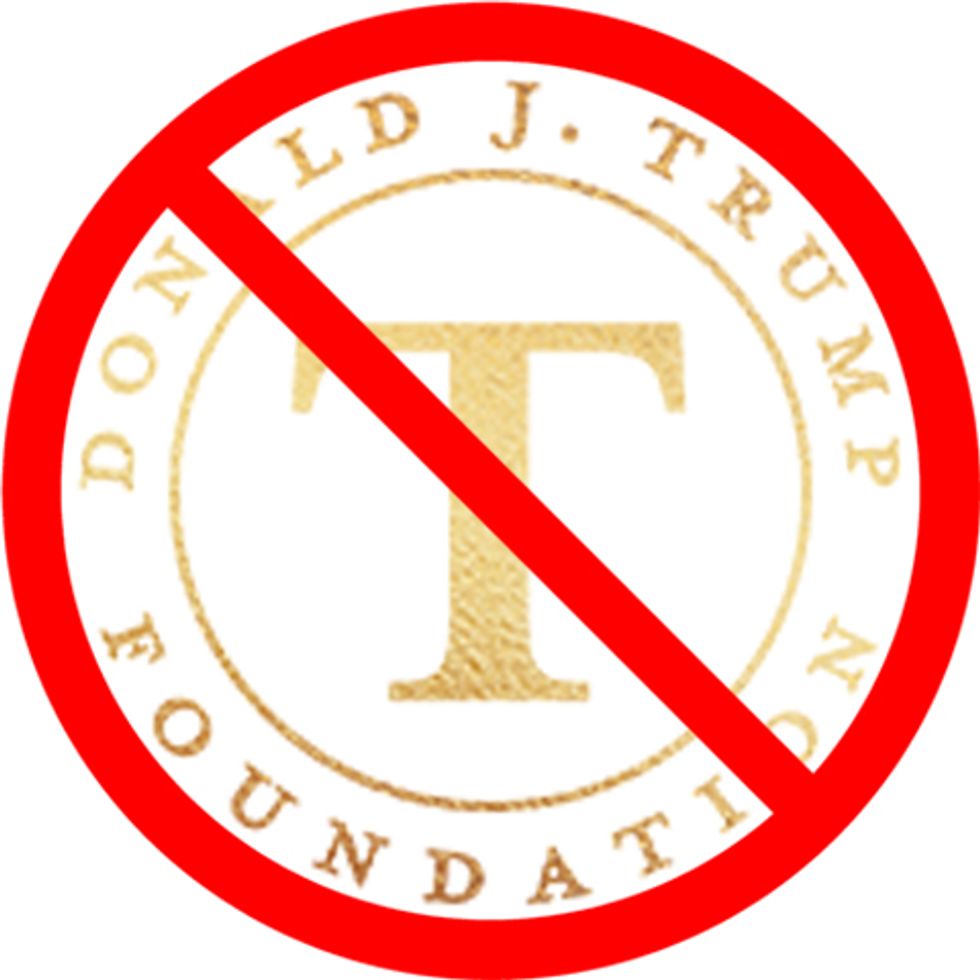 Well, that escalated quickly! Immediately following last week's announcement that Donald J. Trump's "charitable foundation," the "Donald J. Trump Foundation," didn't have the proper certification to solicit contributions in New York, the New York Attorney General's Office ordered the Trump Foundation to stop that, stop that right now. The head of the A.G.’s charities bureau, James Sheehan, sent a letter Friday informing the foundation it was in violation of the state's requirement for charities to be registered with the Charities Bureau and to provide annual financial reports, and must cease fundraising immediately. This could prove to be a real setback for the Donald J. Trump Foundation's Charity Betting Pool on Tuesday night's Vice-Presidential debate, as well as its "Guess the weight of Miss Universe" booth on the Coney Island boardwalk.

As David Fahrenthold of the Washington Post reported last week, the Trump Foundation was registered only as a family foundation designed to be paid into by the Trump family, although since 2008 the foundation has relied only on donations from other people -- Trump hasn't put a dime of his own money into the foundation since then. As Fahrenthold noted Monday, "One important consequence: Trump’s foundation avoided rigorous outside audits, which New York law requires of larger charities that ask the public for money."

Yes, we're certain you're every bit as astonished as we were.

The Trump Foundation was ordered to

supply the state, within 15 days, with all the legal paperwork required of charities that solicit money from the public.

In addition, Sheehan ordered that Trump’s foundation provide all the financial audit reports it should have provided in prior years, when it raised money without legal permission. He said that if Trump’s foundation did not stop its fundraising and file the proper paperwork, that would be considered “a continuing fraud upon the people of New York.”

Not surprisingly, the news was not received well in TrumpWorld:

That seems only reasonable. (Except for the part where the Trump Foundation's spokeswoman is the Trump campaign's spokeswoman. We've been over this, and charities aren't supposed to do politics!) In addition, on Friday, after reports of the improper registration were made public, Trump surrogate Boris Epshteyn said on CNN that as far as he knew, the foundation was "following all the applicable rules and regulations in terms of the foundation," and repeated his previous charges that David Fahrenthold is not qualified to write about the Trump Foundation, this time because Fahrenthold is not an attorney:

"David Fahrenthold is not an attorney at all. He's playing Inspector Clouseau over here and trying to find some clues and piece them together," he said. "All of his other writings have been complete failures."

It was not clear as of press time which fictional bumbling detective Mr. Epshteyn would accuse New York Attorney General Eric Schneiderman of resembling. We hope it's Monk, because Monk was always right even though he had OCD. Also, we miss Sharona.

We're looking forward to Trump surrogates hitting the cable news shows to explain that Schneiderman may have been cheating on his wife (after all, as Trump surrogate Rudy Giuliani says, everyone does), made a sex tape, and put on a lot of weight, too. Also, it's only reasonable to wonder how large a paper shredding bill the Trump Organization will run up this month. If the operation stays true to form, they'll probably bill it to Trump Paper Shredding, LLC, so we'll have to wait for the next campaign financial statement.