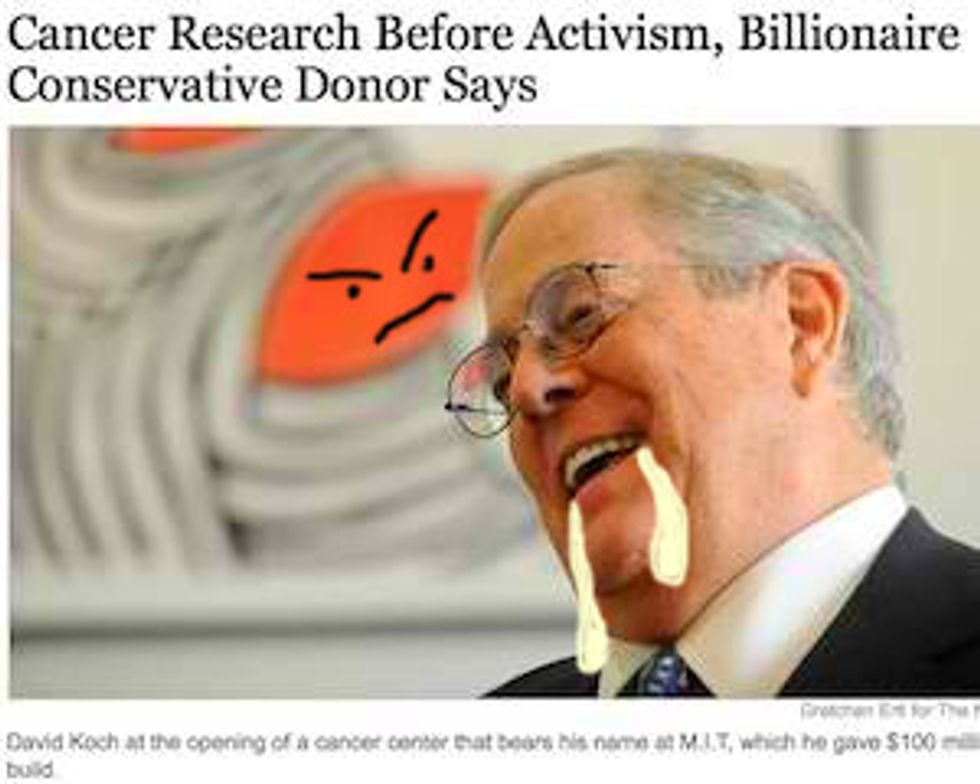 Did you notice America's Greatest Victim getting theNYT "we're sorry" treatment in Saturday's paper? Poor little rich boy David Koch is super sad about how the mean poor/working people are upset because he's funding and directing the destruction of government unions nationwide. This makes him feel bad! And even though the deeply secretive David Koch never does an interview, the New York Times somehow managed to get him to speak, on the occasion of David Koch being honored for giving millions of dollars to a cancer research center, because he has cancer and wants to cure his own cancer, even though he owns an evil forestry empire that insists formaldehyde (a carcinogen) is not a carcinogen. See, when poor people get cancer, it's because they suck. And when rich people who exploit nature and humanity get cancer, it's time to send $100 million to some little people who can maybe take care of the problem.

Really, look at this:

Mr. Koch joked that the call could cause him problems. “I was thinking to myself, ‘My God, if I called up a senator or a congressman to discuss something with them, and they heard ‘David Koch is on the line,’ they’d immediately say, ‘That’s that fraud again — tell him to get lost!’ ” he said with a laugh

Mr. Koch said that only a relatively small portion of his giving goes to politics and public policy — most, he said, goes to cancer research, followed by cultural and educational institutions ....

Thanks, NYT, for finally standing up for the little guy! Honestly, this whole article is a reach-around for David Koch.

PEOPLE OF NEW YORK: Go pry all the KOCH names off the fountains and theaters and library and everything. For America. If you do this every day forever, the arts foundations and library and other non-profits dependent on these robber barons may eventually close the door on these same robber barons who have funded the strangulation of public arts spending. [New York Times]