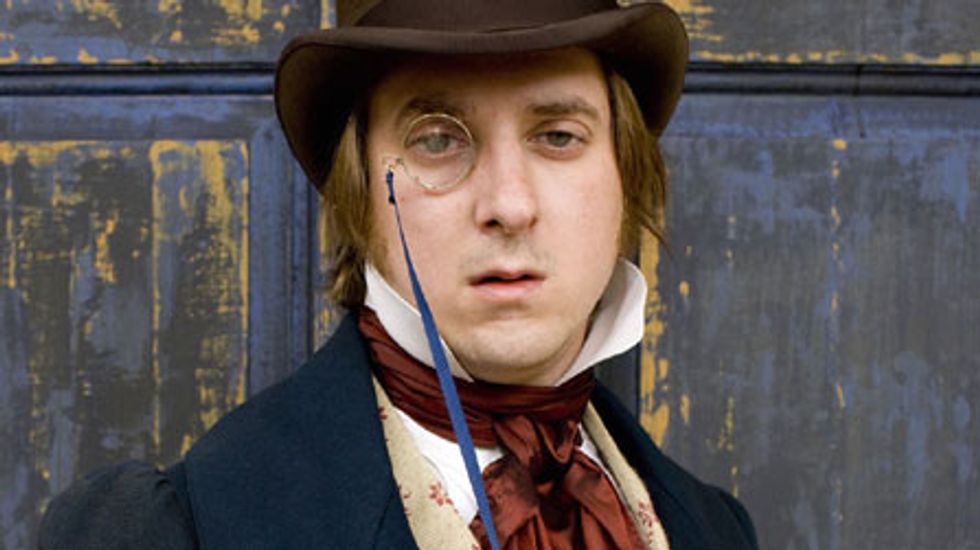 What ho, good man, I am the New York Times. Have you got a grapefruit?

The New York Times stroked its Van Dijk and tugged at the black turtleneck layered underneath its Mao jacket. (The New York Times has trouble dressing itself.) The New York Times had a thought, and it was a thought that was fit to print! "What if I said Banksy was boring and terrible or something, who knows, Too Pompous Didn't Read," the newspaper mused, "and then I picked a mommyblog at random and picked ONE SENTENCE out of an entire travel-adventure in which the proprietress of said mommyblog went into the woods in Lincoln, Montana, her husband and newborn baby in tow, to beard a bunch of neckbearded militia members in their Three Bears den, and I complained that her sarcasm wasn't divine enough to be elevated to satire? That sounds good, let's have grapefruit for breakfast, because grapefruits are gross, and I suck."

The New York Times was pleased with its decision. It ate its stupid gross breakfast and then wandered to its manual typewriter, which it was always lugging around with it on its travels so people would know it was a Real Writer, one who cared about Craft and stupid things that don't matter, like fucking typewriters. It smirked, and cracked its fingers like a master pianist about to play a great piano sonata, if you can play sonatas on the piano, who knows, not us, we are a dumb uncultured blog of bullshit.

The style of Internet writing often called snark participates in sarcasm, typically by adopting the derisive tone of satire without the complex irony. You can find this sort of writing anywhere, on almost any topic. Picking more or less at random, I found this sentence from a Wonkette story about the Oath Keepers, a constitutionalist group that recently interceded in a mining dispute in Montana: “George Kornec and Phil Nappo have a mining claim on federal land; they’ve put up a garage and a fence, and the dastardly government is pushing its weight around and being a big bully and being really terrible and stuff by telling Kornec and Nappo to take them down.”

That’s technically irony, because the literal meaning (the government is abusing its power) is the opposite of the meaning implied (the Oath Keepers are overreacting). But the inversion is applied mechanically, artlessly, in a way that does not encourage the reader toward a deeper truth. There’s no insight here to raise this irony to the level of satire. There is only mockery, backed by certainty that the reader shares the author’s contempt. Sarcasm is a natural fit for partisan news aggregators, because it relies on a calculated appeal to shared attitudes.

The New York Times wondered if it wasn't maybe a shade bitchy, and also lazy, and a smidge disingenous, to pick only that one sentence, when it was followed in the original by the following much better sarcasm:

You can see why such an insult and outrage would call for militiamen and rifles, just as a similar threat to liberty did in Oregon earlier this year. Why, it “smacks of offenses listed by Thomas Jefferson in the Declaration of Independence,” even! (The undoubtedly skilled lawyers of the Oath Keepers believe that filing a mining claim makes federal land your “private property,” which the very first commenter on their own website pointed out: “everyone would use it to have their own personal paradise in the National Forest or on other public lands, or to block access to public lands like many hobby miners want to do and environmentalists would like to do.” You would think the armed men of the Oath Keepers would listen to the part about environmentalists, at least!)

But then the New York Times remembered that it doesn't have any editors anymore and just lets a bunch of idiots write whatever the fuck they want.

Satisfied, it went to bed, where it made perfunctory love to its wife, who lay back and imagined getting drilled by the Daily Mail.