Newlywed Will Explain Marriage To All You Feminist Losers 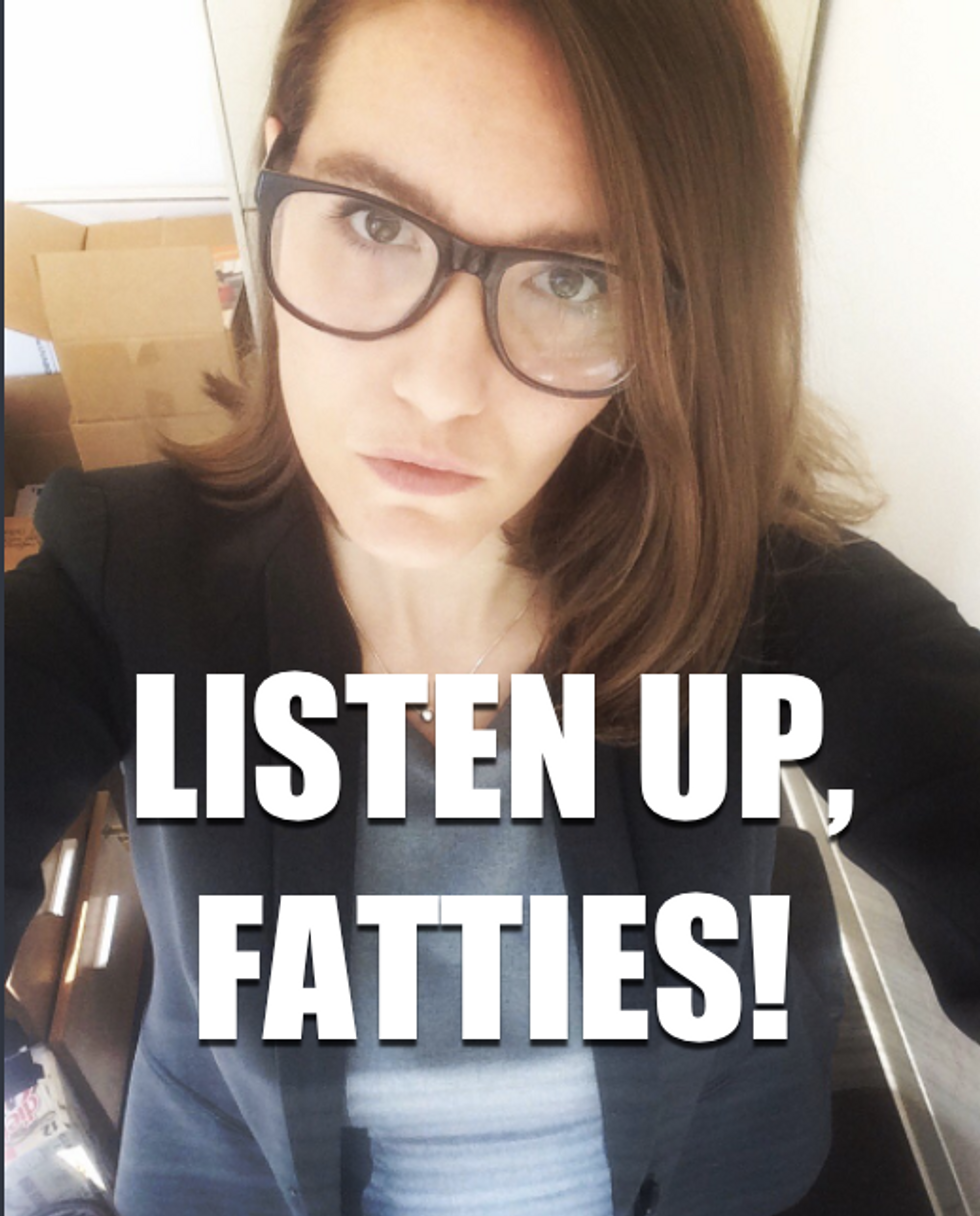 Okay, Inez, you got everyone's attention. Your Federalist piece, "Staying Fit For Your Husband Is One Of The Best Gifts You Can Give Him," is all over Twitter.

You're busily congratulating yourself for "triggering lots of snowflakes." Which seems less a defense of your own ideas than a schoolyard taunt. But you're clearly more interested in pissing off liberals than intellectual rigor, so... Sure. We're all horribly triggered by your article.

Just one question, though. How long have you been married? Has it been a full year yet?

Mazal Tov on your Simcha! You look like a lovely couple, and you should both live to be 120!

But I've been married since you were in middle school, so maybe you'll let me give you some advice in return. Just a little heart-to-heart, one lucky white girl to another. Because really, what does either one of us know about trying to navigate marriage when you're not educated, attractive, healthy, middle class and straight?

Spoiler Alert: Even the best marriage takes work and compromise every single day!

Being new to the party, you think millennials have to re-invent the institution for yourselves.

Having been sold a pack of feminist lies that make both men and women unhappier, those of us in the millennial generation who are interested in happy marriages have had to rediscover a lot of politically incorrect truths from scratch.

It's okay, Honey. One day you'll be 41 and people will ignore you, too. But Gen X is right here, getting hitched and raising families for a couple of decades now. We survived our boomer parents' divorces, embraced feminism, and found out that life is more complicated than a John Hughes movie. The divorce rate is down, and we're actually pretty happy, statistically speaking. And I know that you think feminism is hard on marriages.

Living in a post-feminist culture has made women both unable to recognize what makes men happy, and unwilling to make the effort to achieve that happiness.

But if you'd put down the gloves and stop shadowboxing with some imaginary boogeywomen, you might see that there's more to feminism than growing your armpit hair and "a selfish, 'be yourself' attitude." Feminists don't say, "You should get fat!" We say, "If you get fat, you are still worthy of love. Because your value as a woman isn't solely based on your appearance." See the difference?

This is not about the pursuit of perfection, but rather, about achieving your best self. Your husband knew you weren’t a Victoria’s Secret model when he popped the question, and he won’t expect you to look like Gisele Bundchen now, especially after years together and possibly growing tiny humans in your body. He doesn’t see the thousand nitpicky flaws you obsess over in the mirror, but he does notice the general shape of your body in comparison to when he met you (if not the particular dress you put on it).

Instead, try shifting your appearance a notch or two up your priorities list. Cultivate an active lifestyle or carve out the time to work out regularly, and curb your caloric indulgences.

Apparently not. Let's try another angle.

It's a Marathon, Not a Sprint

Inez, you are young and beautiful. But as someone for whom "growing tiny humans in your body" is not some theoretical future event, let me say that your priorities may change. I had three kids in three and a half years. I work out a lot, but I'm not the woman I was twenty years ago. Do I spend time staring in the mirror obsessing over "nitpicky flaws"? Hahahaha! Ain't no one got time for that!

Sure, I want to look nice for my husband. But I'm also concerned about, you know, not dying before I get my kids launched in the world.

Making an effort to please the man you married is not an act of sisterhood betrayal. Honoring your husband’s masculine nature—and the desires that come with it—is one of the best gifts you can give the man you love.

My body isn't a "gift for the man [I] love!" It's the vehicle I need to get me through the next five decades. And so is yours, Inez! Don't take care of your body as some radical act of anti-feminism -- believe me, no liberal tears will be shed over the size of your ass. Do it for yourself, because you have so many more laps to run. And for the love of God, WEAR SUNSCREEN!

Inez, I could go paragraph by paragraph through your arglebargle, but let's cut to the chase. You stack up a pile of sweeping generalizations, climb on top, and rain down dubious marital advice while shouting, "Feminism sucks!"

Women are no less shallow than men when it comes to sheer attraction, but they are different. Women tend to be turned on by men who display social dominance, power, or the ability to provide more than by hunky looks. The de-emphasis that women place on physical appearance sometimes leads us to project our own attraction patterns onto our spouses: sure, it’s easy for us to imagine still loving our husbands plus 50 pounds, but how easy is it for us to feel as gung-ho about, say, their extended unemployment?

You know that friend who gets you the gift she would have wanted instead of the one you did? That’s an example of this projection. But instead of the pain and confusion that projection causes, what if we women instead embraced the ways our desires differ from our husbands’? There are some responsibilities men have to women and some women have to men. Taking care of yourself is one of those responsibilities.

LOL, WHUT? I'm not married to a fucking Ken Doll! Even if all your nonsense theories were true, I don't sleep next to a collection of trendlines! A statistical table is the second to last place I would go for marital advice.

But the absolute last place is some nitwit who's been married for fifteen minutes and wants to lecture the rest of us on How To Wife Good.

Bitch, please! We're not triggered. We're laughing at you.

Your Wonkette loves millennials and knows that this loon does not represent you! Money, please!