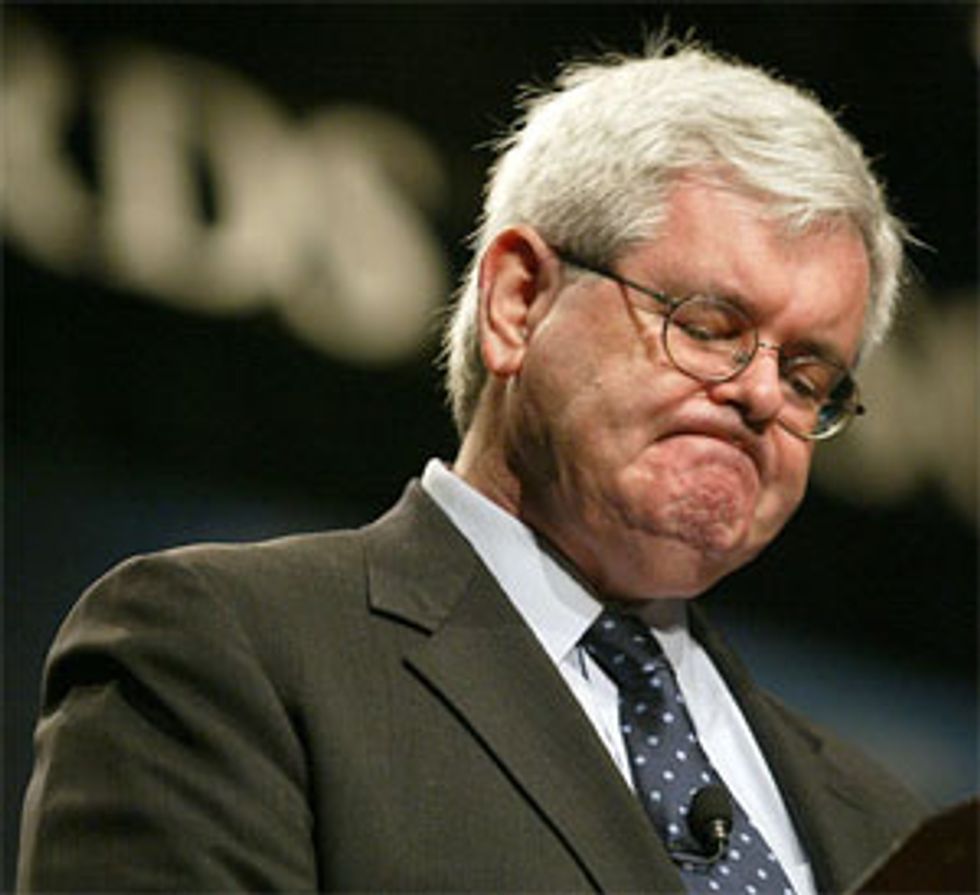 Last week, Newt Gingrich put out what he described as a"heartfelt" statement about the passing of Nelson Mandela. (No, you're not really supposed to describe your own work as "heartfelt," but in the annals of Gingrichian self-regard, this is probably as minor as it gets.) Back in the '80s, Gingrich had in fact (for once) been on the right side of history, as he argued the Reagan administration should fight Apartheid instead of lovingly fellating the Afrikaner government that was then stomping on the throats of the black majority.

Well, ol Newton got a bit of pushback from people who were very ANGRY that he would have kind words for the South African Marxist Muslin Terrorist, and he wrote a second piece explaining "shut up is why."

Which is absolutely not news, any of it. Every Republican who has said anything at all not spitty and lynchy about the father of democratic South Africa has been inundated with a bunch of waaaah und drang. But what is news is whose fault it is that Real Merkins are a-bitchin' and a-hootin' about that dastardly old Mandz: it is MSNBC's fault, of course, just like we said in the headline.

“Having analyzed it over the weekend, there were two waves of rejection of the idea of honoring Mandela,” Gingrich said, “and one wave was people who confused Mandela’s role with the African National Congress during the period when he was in jail." [...]

“The other was, I think, that some elements of the left, particularly on one news channel, went overboard in trying to use this in a chance to attack Ronald Reagan,” he continued, and added that “this was another excuse from the left to smear Reagan.”

You see, conservatives had no choice but to attack Mandela because MSNBC "smeared" Ronald Reagan by reminding viewers that Ronald Reagan actually vetoed a strongly bipartisan bill enacting sanctions against the South African government. (The bill was so bipartisan that a majority of Republican senators voted to override Reagan's veto.)

If only that mean old MSNBC wasn't constantly victimizing Great Reagan's Ghost by pointing out that he was a fucking asshole, Republicans would not have to be so racist in his defense. Be ashamed, MSNBC. Be very ashamed. Once again you have forced everyone to be super-racist and hateful, by existing.