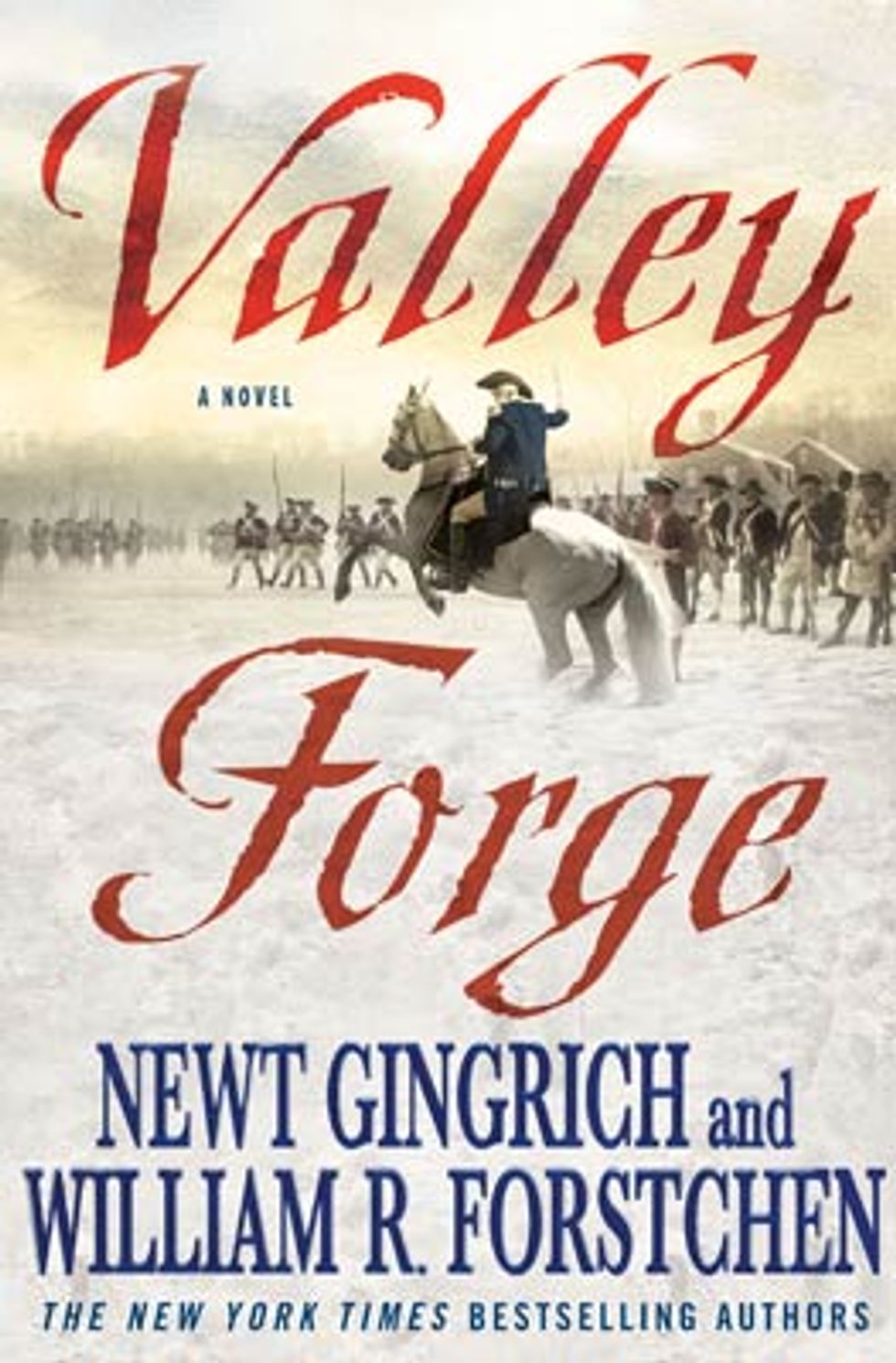 Historical novels aren’t like those Important Must-Read Books about getting divorced in Connecticut or that time your grandparents died. They imply that other times, other places, other ways of being, people who are in many ways QUITE DIFFERENT from yourself might be interesting and worth reading about, sometimes even more interesting than you and your addiction to ferret-tranquilizers (which caused your Connecticut divorce). The best historical novels are rich and entertaining indeed, but as with any other kind of writing, 90% of them are pretty bad. Which brings us to Valley Forge, a novel about the American Revolution partially authored by beloved American demagogue Newt Gingrich.

Newty’s new novel was co-written by one “William R. Forstchen,” who the back flap describes as “a Faculty Fellow at Montreat College in Montreat, North Carolina.” This is important, as your reviewer can’t imagine Newt has much time to write a novel solo, what with all the important advice he has to dispense these days, for freedom and America.

Valley Forge is actually a sequel of sorts, the second book in Newt’s series about America’s plodding war of independence against Lobsterback Isle and its German king (Kate Middleton the Negative Third). The first one concerned the signing of the Declaration of Independence and was titled To Try Men’s Souls; Wonkette World o’ Books regrets that we haven’t read it, and never will. Valley Forge is set about a year later, at, uh, Valley Forge, where the ragtag Continental Army is having some trouble settling in for the winter. No food, no supplies, but plenty of frostbite and disease. At one point the place is described as "worse than Long Island."

There are quite a few characters in Valley Forge. You’ve got all the main Revolutionary War generals, an effete Voltaire-reading Frog called “Lafayette,” a damnable traitor named “Allen van Dorn” who sides with the lobsterbacks even though he’s a colonist, and a curious German called “Baron von Steuben,” who winds up saving the day in the end. The hero of heroes, though, is a presumably fictional character called “George Washington.” Judging from the book he’s a Ronald Reagan type, but earlier in time.

The moral of Valley Forge is slightly Reaganite, come to think of it. The brave soldiers of Washington’s army scrap along without food and proper supplies, but they don’t kick up a fuss, because it’s not like our earliest troops wanted to be welfare queens. Ultimately they pull themselves up by their bootstraps, persevere and kick lobsterback ass.

General Lee, after more than a year and a half of imprisonment, had finally been exchanged and returned to the army a month ago. His first night, actually the following morning, had proven to be an unmitigated disaster...

The man had gotten too far into his cups. The embarrassed gathering finally let him withdraw for the night to a small bedroom, adjoining what had become Martha’s private sitting room...

All had waited for Lee to awake in the morning, but the man did not appear until nearly noon, when Washington finally sent Hamilton to knock on his door...Hamilton has returned a minute later, obviously embarrassed, followed by Lee, who looked disheveled and still more than a little drunk. And from his small room came the loud, drunken laughter of a woman...

Martha was outraged...The bedtime discussion they shared that night was less than comfortable for General Washington. Martha demanded that the hussy be driven out of camp.

Valley Forge is more passively bad than outrageously bad, so hooray for Newt/Forstchen. It’s just another mediocrity among many mediocrities, one used condom in mass publishing’s colossal Floating Trash-Island of Futility.

Your reviewer will leave you with a bit of Funny Frenchman dialogue:

“You can leave any time you want, Justice Putnam,” Harris replied, barely sparing him a glance. “Same stands for all you sons of bitches.”

He looked back up at Lafayette.

Lafayette smiled and shook his head.

“No offense. I am still learning my English. Let us see, you called your men sons of dogs, is that it?”

Thanks to Wonkette operative “Ryan.” Wonkette World o’ Books is unilaterally taking Thanksgiving off, so your reviewer will see you starving patriots in two weeks.