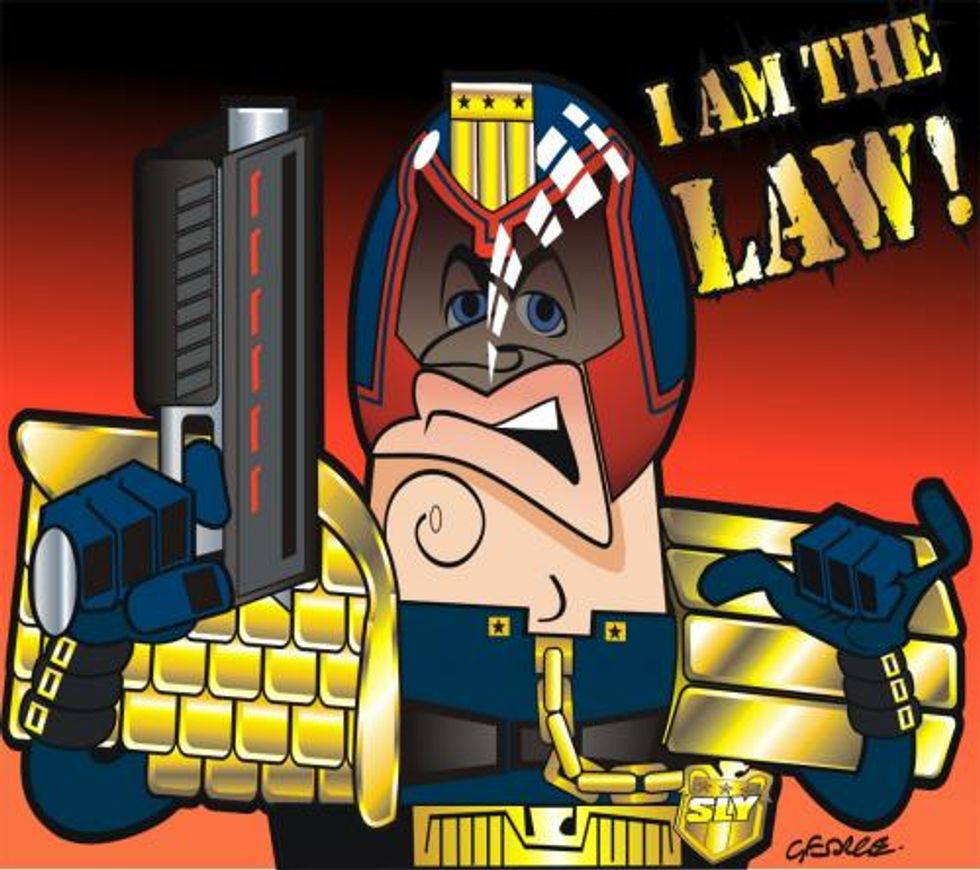 A Republican candidate for Hillsborough County Sheriff said Wednesday that he believes elective abortions are unlawful and he wouldn't reject the use of deadly force to stop them.

This is a position we would like to see more fully fleshed out before we reject it out of hand. Possibly a marauding sheriff executing people for abortions wouldn't be so terrible, maybe? What's the basis for his authority to do this, say?

Frank Szabo said that as sheriff, he would arrest any doctor performing elective or late-term abortions in his jurisdiction.

"There is a difference between legal and lawful," Szabo said.

Szabo explained the difference by referring to the issue of slavery, which he said used to be legal but was never lawful under the Constitution. He said that even though elective abortions are legal in New Hampshire, with some restrictions, he doesn't consider them lawful.

Based on Szabo's solid reading of the Constitution and his thoughtful distinction between "legal" and its exact synonym "lawful," we should take what he says seriously. After all, except for the Three-Fifths Compromise and Dred Scott and the Constitution and the entire functioning of America until 1865, at no point prior to the passage of the Thirteenth through Fifteenth Amendments was slavery actually lawful. Everyone just did it out of social pressure, like how women get abortions because otherwise they won't get Lululemon discounts.

But Szabo may have inflamed the issue further when asked if he would use deadly force to prevent an abortion.

"I would respond specifically by saying that if someone is under threat, a full-grown human being, if they're under threat, what should the sheriff do? Everything in their power to prevent them from being harmed," he said.

Sometimes, you have to abort the doctor to save the life of the child. It's a common and rational exception in our scheme of abortion regulation, and it is good that someone is finally willing to enforce this. The killjoy (pun intended?) Republican Speaker of the New Hampshire House Bill O'Brien, though, totally wants to Todd Akin this guy because he's a dick:

"Mr. Szabo's comments make it clear that he does not understand the constitutional role of sheriff in New Hampshire. Moreover, no elected official is given the latitude to take the law into his or her own hands and decide he or she knows better than the Legislature and governor what should be enforceable laws," O'Brien said in a written statement. "It is our hope that Mr. Szabo will withdraw from this race and think long and hard about grounding himself in constitutional law and principles before considering political office in the future."

The best part is that O'Brien won't say that the crazy roving murderer has no place in the GOP; just that he would like the crazy roving murderer to maybe read an eighth-grade civics textbook before taking another crack at walking around with the power to arrest people (and also shoot them). It is heartening that the New Hampshire GOP is willing to let people redeem themselves before writing them off entirely.