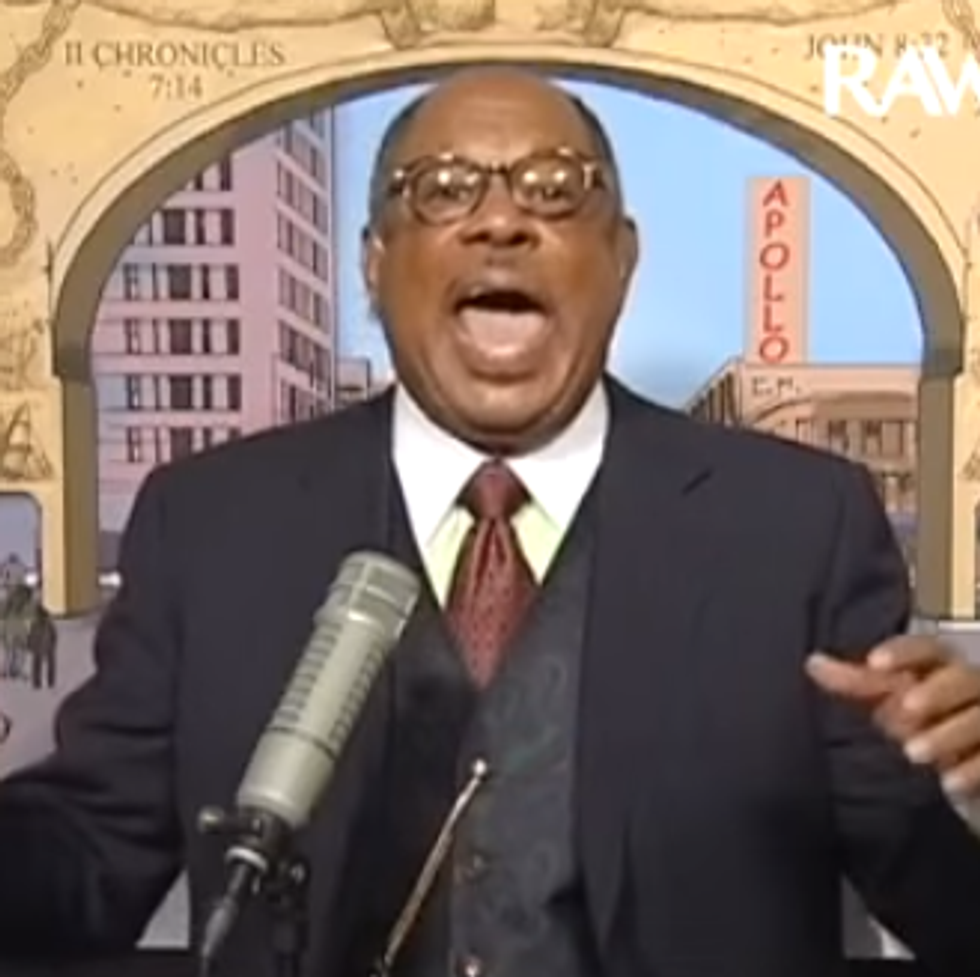 Have you met this nice, totally normal pastor of the Gospel of Jesus Christ, James David Manning? He is the main dude of the Atlah Worldwide Ministries in Harlem, and his church is up for auction due to how it owes outstanding taxes and other debts totaling $1.02 million. Awwwwww. That's sad. Well, anyway, he has a message for any gays threatening to buy his church:

Can I share this with you, to all the sodomites, that think you're gonna purchase this church in a foreclosure sale? Lemme tell you something. Before you can ever own the Lord's house -- 'cause that's what this is. This is the Lord's house! This ain't no damn bath house. This ain't no fag house! This is the Lord's house! And before YOU can EVER own this property, hook or crook, to own this property, you will be carryin', MEN who are FAGS, with TESTICLES, will be carryin' babies in their TESTICLES and givin' birth to them through their ANUS! That's how impossible it is for you to get this house! When you start carryin' a baby in your bags, and birthin' that baby THROUGH YO ASS, then you can own this house! Until I see you pull a baby OUT YO ASS, you ain't gonna pull this church out from underneath us! And boom shacka lacka goes right there! And all you fags can GO TO HELL! And do it now. I'm James David Manning, everybody! I'm the LORD'S servant.

Well amen, you motherfuckin' fags! Thing is, the gays might be buying the LORD'S HOUSE, and they're not even ball pregnant with butt babies (unless they are, you don't know). The Ali Forney Center in New York City is one of the foremost organizations in the country to deal with homeless LGBT youth, and it currently has the most hilarious, wonderful, life-giving (but not through the butt) fundraising/trolling campaign called #HarlemNoHate going on, to buy Manning's church and use it to help the kids.

I imagine we are going to hear a lot of ranting and raving from Rev Manning until the auction. And he has good cause to be ranting. The Ali Forney Center has been overwhelmed with support since we announced our bid to site a housing program for LGBT youth [...]. I have no interest in birthing babies, only in providing safety for New York City's homeless LGBT youth.

Wait, did we just say "semen froth latte"? Yes! See, Manning has been holding court in Harlem doing this bizarrely homophobic rumpy shaky dance for a long time now. Aside from being just pretty sure the real Jesus "would stone homos," he also believes Starbucks puts black market man semen (as opposed to the free market kind, which is more fun to extract) into all its lattes and here is why:

[contextly_sidebar id="a5zoOYbEsImyS6EoBxN9urSG2b3LPbBi"]"People," hahahaha. Folks, they love the semen! (OR SO HE'S HEARD.) Manning also says Mitt Romney and Newt Gingrich were fathered by the semen of common black men, and surprise, his beliefs about Obama are pretty cool too!

Anyway, you should probably throw some whore diamonds at the Ali Forney Center, for to help the kids and for schadenfreude and LOLs. (See? We don't only ask for money for OUR OWN KICKSTARTER.)