Nice Time: Enjoy This Completely Routine Federal Memo That Treats Benefits For Gay Spouses As The Boring Thing They Now Are 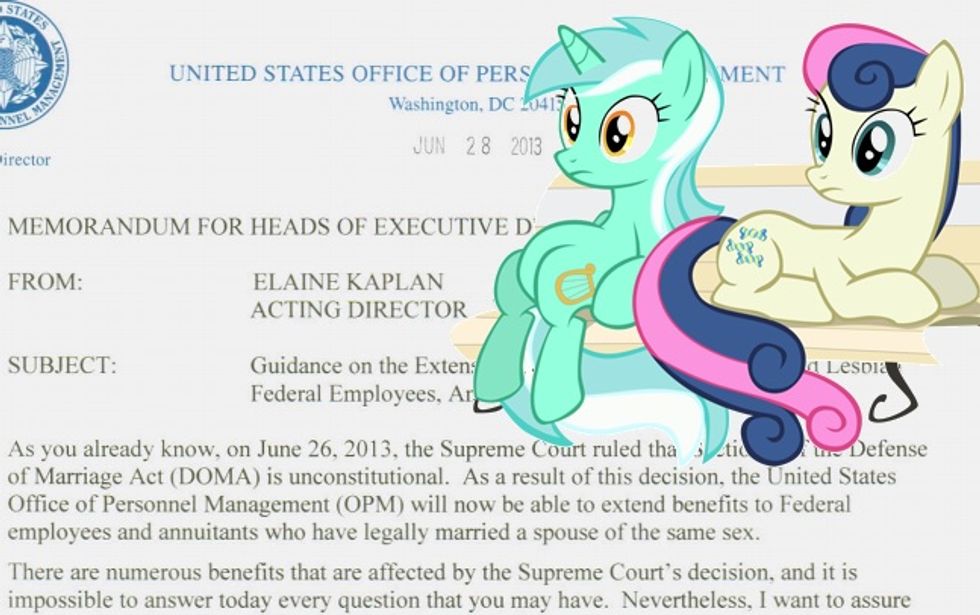 Hope you're all sitting down, kids, because after all the fear and terror and panic in the streets, here is thetrue face of gay marriage: The memo from the U.S. Office of Personnel Management (OPM), explaining how the gummint will start implementing federal benefits for same-sex spouses of federal employees. And it's just full of terrifying, society-wrenching... uh... explanations of how to apply for stuff that is exactly like the stuff that opposite-sex spouses already have. We're pretty sure that lurking somewhere in the talk of pay periods and deadlines, there's a plot to criminalize Christianity. Hmmmm..."Open Enrollment," for instance! That sounds pretty licentious!

In a shocking disappointment to the easily offended, apart from an introductory paragraph that notes that the new benefits rare the result of DOMA being found unconstitutional, the memo from OPM acting head Elaine Kaplan reads like ninety-seven bajillion other memos from your employer's HR office. The Atlantic has some excerpts:

Health insurance: "All legally married same-sex spouses will now be eligible family members under a Self and Family enrollment."

Dental and vision: "As with FEHB, all legally married same-sex spouses will now be eligible family members under a Self and Family enrollment or a Self Plus One enrollment."

Even retirees, who have two years to "inform OPM that they have a legal marriage that now qualifies for recognition."

Terrifying stuff, people. But...but... wait, here's something to freak out over! Just LOOK at the divisive language in the memo's closing!

We appreciate your cooperation in our effort to implement the Supreme Court's decision, and provide greater equality to Federal employees and annuitants regardless of their sexual orientation.

"Cooperation?" More like obedience, Madame Commissar! What that really means is that we're living in a police state!

Tip o' the leather kitten hat to alert Wonkette Operative "Fed up Fed" for sending the memo along; here's a copy from Buzzfeed, for you document geeks: