Nice Time! Gay Syrian Refugee Pretty Darn Happy To Be In Boise. Yes, The One In Idaho 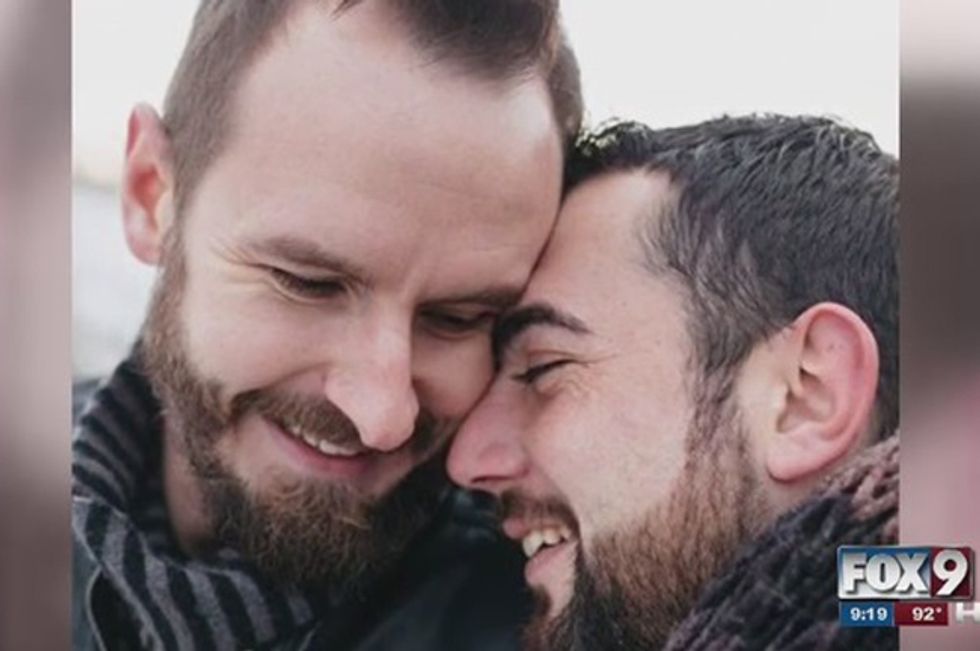 Caution: Ninjas may sneak in and cut onions as you read

Hey, how about a story tagged "Syrian refugees" and "Idaho" that doesn't have a single darn militia idiot anywhere in it? Weird but true, and probably a far better reflection of the reality of refugee life in Yr Doktor Zoom's strange little red state than the terrible stories you've heard, because as the little German girl said, "people are basically good." Except, you know, the ones who killed the little German girl and created all those Syrian refugees. But we digress, because didn't we say this was a Nice Time story? And it genuinely is!

Boise Teevee station KIVI ran a profile Thursday of Shadi Ismail, 29, that nice gent up top hugging his BF. Mr. Ismail left Syria a while back because his own family wanted to kill him for being gay. This is where we'll remind our own religious extremists that the United States of America is a place where people seek asylum because religious extremists want them dead, so that should tell you a little something about what really makes us Exceptional.

And what does Ismail think is the biggest difference between life in Syria and life in Boise, where he was resettled a bit over three years ago?

“Being dead versus being alive,” Shadi said.

“I didn't used to trust people. I was dying every day, lying every day, hiding myself every day, scared every day,” Shadi said. “What if anyone finds out I'm gay? Like before. They found out I was gay at work and they kicked me out after being there for three years; but [in Boise] I go to work happy, I'm being myself, everybody at work knows I'm gay and they love me. They don't care.”

We guess we need to put a temporary personal moratorium on griping about Idaho Backwardness. At least until the next time a state senator freaks out over heathen Hindoo prayers at the state legislature.

When he arrived in Boise, Ismail knew little English beyond "hello" and "thank you," but then quickly got right into living the good old American Dream in that earnest way we tend to assume is a thing of the past. For instance, his rapid immersion in depending on the Kindness of Strangers:

One of his favorite stories to tell is of a woman he met on his first day heading into downtown Boise. Determined to learn the transportation system and make it on his own, Shadi headed down Curtis Street on his bicycle from the refugee resettlement group, and made it to 13th Street before realizing he was lost. He was scared to talk to a stranger for fear of being beaten, but he stopped a woman and showed her the map of where he was trying to go.

“She looked, and she grabbed my hand and walked with me across the street to where I was going and said, 'See this door? Good luck!'” Shadi explained. “And this was my first impression and first feeling about Boise and I just thought, 'God, I love this city.’"

He got a job cleaning offices 15 days after arriving, and of course framed a dollar from his first paycheck because that's what you do. After three years, he's now a manager at a food processing company, and living with a group of friends. Oh dear. A self-chosen family of love and acceptance? This story is downright American, is what it is. We'd like to hope you could splash it on bigots to make them melt away.

“I have a very amazing life, because Boise accepted who I am and didn’t judge me for being Syrian or being Arabic or being gay,” Shadi said. “I never felt love before except here; and I found love here. So it's my dream come true.”

On top of all that, Ismail has even managed to begin reconnecting -- long distance -- with his family back in Syria, no doubt because he now has a home where he feels accepted for who he is:

“I still love them, they're still my family,” Shadi said. “I was a little boy when they raised me, until they found out I'm gay. I don't judge them for that, I don't, because they're in a different time. They don't accept it.”

Shadi says he doesn’t judge his family for the way they treated him, even though he feared for his life so much he had to flee the country.

And yes, he and his boyfriend recently marched in Boise's Pride parade, which is a pleasant reminder that decent people are the real silent majority:

“Everything in me was feeling love. No hate. I wasn't embarrassed,” Shadi said. “I was walking and people were telling me, ‘welcome, we love you’ and all this kind of stuff and cheering me up.”

[wonkbar]<a href="http://wonkette.com/596295/loudest-patriots-in-america-defend-idaho-from-pro-refugee-speeches-at-boise-rally"></a>[/wonkbar]Science is still searching for a way to capture and transfuse that level of happiness; until it can be safely bottled and distributed, here's hoping it's infectious. We're not sure whether it would be better to not tell Mr. Ismail too much about Donald Trump, or perhaps to send Mr. Ismail to Mr. Trump as an envoy from the Decent Human Community [NOPE and NOPE, keep this precious boy away from the bad man! - Ed.]. As we saw at last fall's rally in support of refugees at the Idaho Capitol building, we non-assholes really do outnumber the haters, even if the haters have a louder amplifier.

Happy Fourth of July weekend, Wonkers. U.S. America screws up a lot. But parts of our terrible wonderful country are really worth fireworks and celebrations.