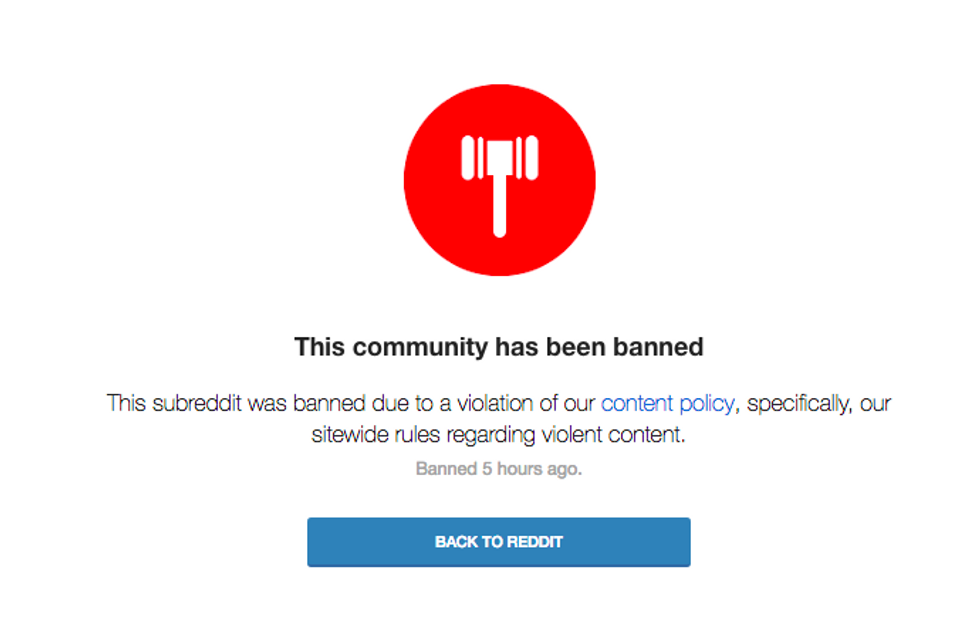 Late in October, Reddit finally decided to crack down and ban some of its most notoriously violent forums, including subreddits devoted to National Socialism (that's not the good kind of socialism) and bestiality. At the time, yr Wonkette noted that, for some reason, the Incels subreddit was still up and running. This was very strange given that said subreddit spent an awful lot of time worshiping Elliot Rodger, talking about how it was very unfair that rape is illegal and the government won't provide them with women to have sex with, and generally fantasizing about violence against women who reject them.

But last night, all of that changed. FINALLY. The subreddit was banned, along with all associated subreddits and the replacement subreddits they immediately tried to set up.

Yes, the involuntary celibates are now involuntarily celibate from Reddit.

Now, you might assume "OH. Well. They are probably just going to go over to Voat, the site that is like Reddit but 100% garbage fire. However, although a forum for incels on Voat was immediately set up following their banning, it appears to be more of a troll than anything else.

What they've done instead is set up a bulletin board (remember bulletin boards?) of their own at incels.org where they are currently lamenting the cruelty of their ban, and claiming that this is "bullying." Because they think people have a problem with them because they can't get laid and are self-reportedly unattractive, rather than the fact that their forum was both violent and toxic. Why they didn't just go and join the Sluthate messageboard -- formerly the PUAHate messageboard where Elliot Rodger used to post -- I do not actually know.

But I'm glad it's gone from Reddit; being on Reddit made it far more easily accessible than it would have been otherwise. In my opinion, it was basically a cult. Men who had trouble getting dates would go in there and, as they say, get "blackpilled" and end up spending hours of their lives thinking about how women were wearing leggings just to spite them.

Will they probably get worse on this messageboard? Yes, I think they will. Reddit did have a certain amount of rules, and this board will have none. However, I don't think they'll be able to pull people in quite as easily.

I will be keeping an eye on this forum also, as well as Sluthate and 4chan's /r9k/ because I think it is important to keep tabs on these people and ensure that they never get to do all that misogyny in peace.

Wonkette is reader-supported! Support us, reader!