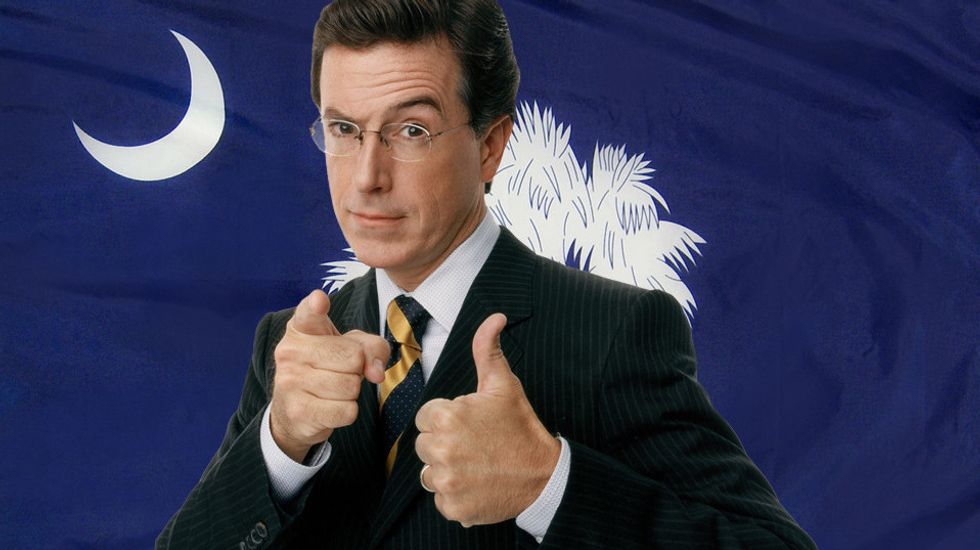 Is our South Carolina children learning? Stephen Colbert, South Carolina native, decided to do his part to make sure that "YES THEY IS," by announcing that he, along with some of his buddy-pals from this big money foundation, would be chipping in $800,000 in order to fund every single grant requested by South Carolina teachers on the DonorsChoose.org website, which acts as a sort of Kickstarter for teachers all over the country, so that they can afford to give their kids the best book learnin' they know how:

Colbert made the announcement on a live video feed Thursday at a surprise event at Alexander Elementary School in Greenville.

Colbert partnered with The Morgridge Family Foundation 's Share Fair Nation and ScanSource, which is headquartered in Greenville, to fund nearly 1,000 projects for more than 800 teachers at over 375 schools, totaling $800,000.

State schools superintendent Molly Spearman explained that these projects are "generally extra things, but to be honest with you, in some situations it could be basic-type things that the students need where the district just hasn't been able to fund it." That, of course, happens far too often in America's public schools.

Colbert told the kids to "enjoy your learning," and the kids did not respond by saying "learning sucks, science isn't real," so they're already ahead of a lot of their parents. The superintendent, who, we must point out, has the most delightful Southern accent ever, noted that it was Teacher Appreciation Week, which made Colbert's lovely gift even more timely.

The Daily Caller, of course, decided to dig into the grant requests to make sure they all are worthwhile, according to wingnuts, and found that Stephen Colbert bought the kids 101 cow eyeballs (for dissecting!), therapy balls (to keep the kids focused in one classroom), and also a bunch of liberal froggy French food ingredients, to make crepes, in French class! GOOD. We're pretty sure the teachers have a good grasp on what their kids need, and also fuck the Daily Caller.

So, South Carolina kids, enjoy all the fun educational things you're going to get to do, and remember, it was that nice liberal man on the television, and not your creationist moron Republican legislators, what made it happen.