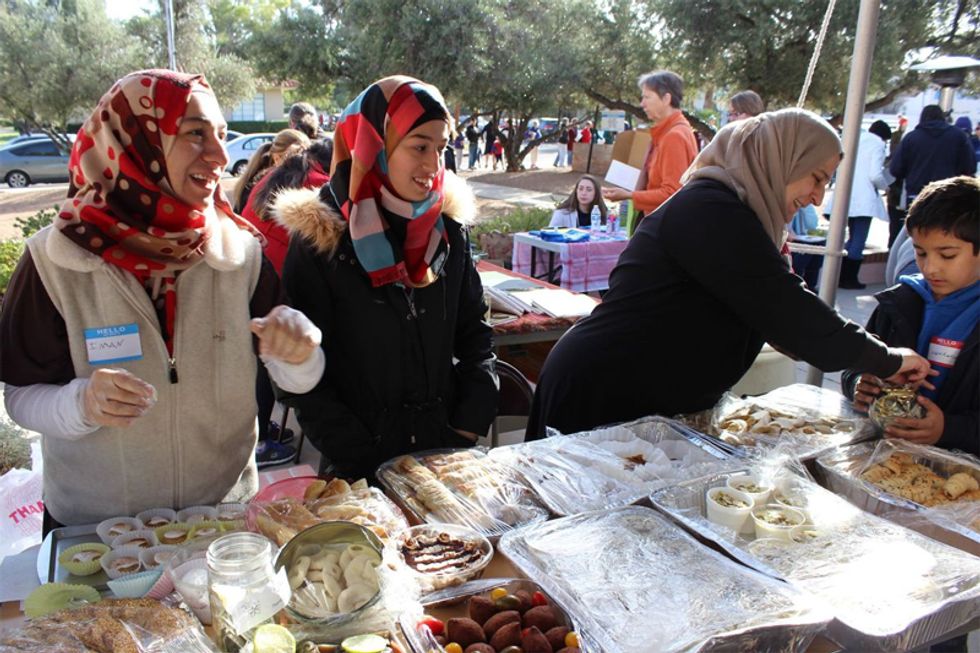 Members of the international baking conspiracy

With everything looking horrible, here's a story to rekindle that little spark of hope for humanity you've been sheltering (at least until we cover Trump's next cabinet appointment): For two weeks going, now, an interfaith bake sale held by Syrian refugees at a church in Tucson, Arizona, has been a huge hit, leaving the refugee women with some extra pocket money and a warm sense of neighborliness, and their Tucson customers with an assortment of delicious baked goods for holiday gifts or for unrestrained personal nomming. We're not sure how the Usual Suspects will find a way to spin this as something sinister, but we're sure they will. Syrian Refugees Attempt To Win Over Patriotic Americans Through Deceptively Delicious Desserts! Or maybe Syrian Refugees Plot Takeover Of Arizona Via Sharia-Compliant Sweets!

The first time the Syrian women and their families brought their baked wares to Grace St. Paul's Episcopal Church in Tucson for a "Syrian Sweets Exchange" on Sunday, Dec. 11, the platters of traditional Syrian sweets sold out in under an hour, according to Nour Jandali, one of the organizers, who's been in the US for 23 years. Another of the organizers, Melanie Cooley, guessed the bake sale drew between 300 and 400 customers.

So the second time around, the Syrian bakers were ready to sell some desserts, by golly, many using old family recipes: Several told Arizona Daily Star reporter Johanna Willett they'd been baking for days before the second sale, held Saturday. Both events were sponsored by Arizona Welcomes Refugees, a group founded by state Rep. Steve Farley, who has also organized potluck dinners at the church to help refugees and Tucson neighbors get to know each other. That's the Baja Arizona we know and love!

About 20 women took part in the event this weekend, with the proceeds going to the bakers, said Cooley. The women were picked up from several locations around the city by a school bus borrowed from the Islamic Center of Tucson's Al-Huda Islamic School -- but renamed for the day the "Syrian Sweets Express." After the sweets sold out the previous weekend, the tents in front of the church attracted about 500 customers this time around, including many who'd left empty-handed the week before.

"I'm very happy to be here and working with the ladies from Syria to serve the community," said Ahed Al Asmi, a 26-year-old mom of three from Daraa, Syria whose family has been in the U.S. for about three months.

Rania Kanawati, a Tucsonan who moved to the U.S from Syria more than 20 years ago, translated.

Marwa Al Fandi, 27, is also from Daraa. Her family has been here for four months.

Baking for Tucson has kept her busy -- a welcome distraction from the week's events in Aleppo, Syria, where many of these families still have connections.

"People want to help Aleppo," Sen. Farley said Saturday at the bake sale. "This is a very tangible way to help."

Ms. Jandali said the turnout was reassuring to many of the women, who "see on TV that the U.S. does not want Syrians [...] But then they see all of these Tucson people ... They were telling people, "We are glad we came to Tucson because they are welcoming here.'"

Ms. Cooley said the sharing of delicious baked goods could be the start of something larger:

"I was visiting with another one of my friends this week and she was talking about how meaningful it is for her to get to share Syrian culture and to get to share who they are," Cooley said. "Food is really integral to their culture and hospitality and the preparing of food and they are quite passionate about it, so getting to share that with a new neighbor and connect with people through food and being able to actually offer something is really meaningful to them."

A little suggestion for everyone involved: Boise, Idaho, has been home to an international market, with small businesses run by immigrant vendors, for a while now; an arson fire destroyed its original location in September 2015, but the businesses have mostly relocated in new locations. How about a nice Syrian bakery as the anchor for a similar venture in Tucson? Something this nice needs to become more than just a one-time event.