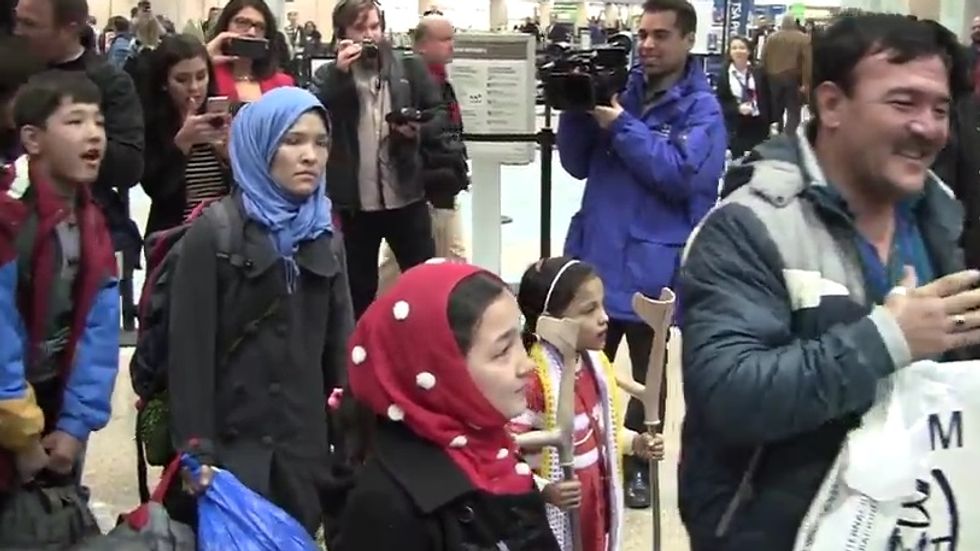 HUNDREDS showed up at #SLC airport to give #Afghan #refugee family of 7 an #extreme hug! Last refugees to make it in post-ban. #noban pic.twitter.com/HPQAVGQhn8

Here's a nice-time video for you to watch as often as your Trump-weary spirits might need: Hundreds of people in Utah welcoming an Afghan family to Salt Lake City International Airport Thursday. Hassan Barat Ali Hassan, Fozia Ramazan Ali Qurban Ali, and their five kids ranging in age from four to 15 look very tired and not a little apprehensive at all these Americans cheering them like crazy people, which we are.

Here's the skinny from the Salt Lake Tribune:

"This is the first time in our lives we have been welcomed," he said. "You are so kind and nice."

It was only through a federal judge's partial stay of the 120-day temporary ban on refugees that Ali Hassan and his family were able to enter the United States, said Danielle Stamos of Catholic Community Services, which sponsored them. They were too far into the process to be turned around, she explained.

The family fled Afghanistan several years ago, and had been living in a refugee camp in Pakistan; they applied for refugee status about two years ago. In that time, they already got vetted pretty extremely.

Like so many refugee stories lately, the immigration ban has also left their family in pieces: Ali Hassan's mother was rejected for some reason and denied entry from Turkey, so he believes she'll be sent back to Islamabad. No, we can't think of any good reason an Afghani grandmother would pose a threat to the U.S., either. Ali Hassan said he hoped Trump would lift the ban and that his mother can come to join the family in Utah.

Yeah, but what if she's one of those grandmas who's devoted to destroying America and instituting Sharia Law? Since the overall ban on refugees will end after 120 days when new "extreme vetting" is put in place, perhaps she'll still have a chance. Or not. We're America. (New national motto: "We can afford to not care.")

In conclusion, welcome to America, Hassan, Fozia, and your beautiful children. We're pretty sure more of us are like the people you met at the airport than the jerks who decided your mother isn't worth helping. We're working on making this place better, we really are.