Nice Try, Obama, But Your Doctored Football Photo Is America’s No. 1 News Story 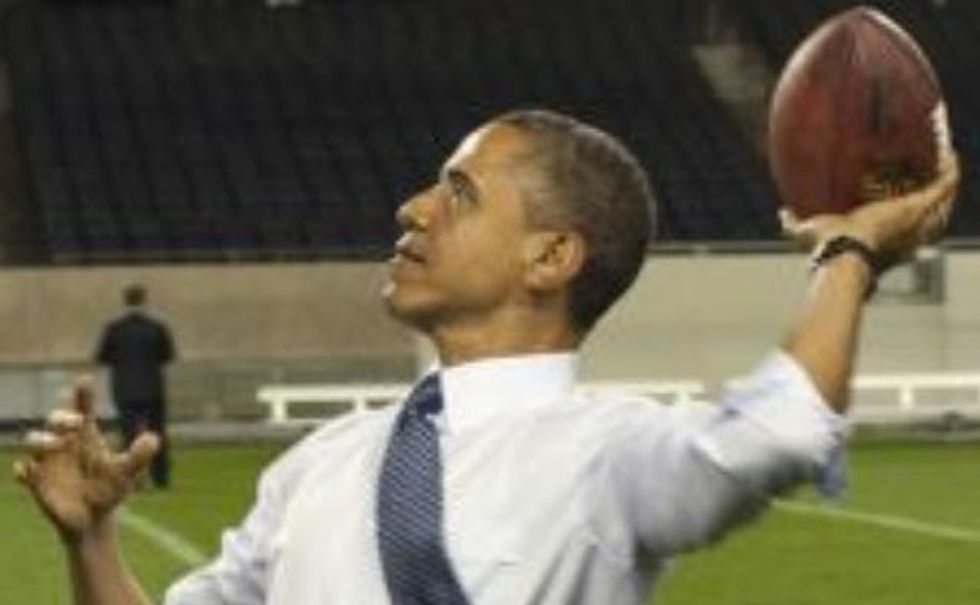 Sorry, "White House photographer," but the 101st Keyboard Brigade has figured out your little scam! It has something to do with the superscript 'th,' we are sure! Or ... pixels? Yes, pixels. Your mom has taken a class in Detecting Internet Forgeries from the Dan Rather Truth Squad, and she was very excited to find such skullduggery -- straight from the top! -- on her very first try! Good job, Your Mom! Hugs and kisses!

I'm not one for conspiracy theories. I prefer to base my opinions on demonstration fact that I can point to. However, after looking at an extremely odd photo of President Obama "throwing" a football, I have my doubts that this photo is real.

As do we all! And we didn't even have to look!

However, on closer inspection, some very odd things pop up. If you go to the linked picture, in which the photo is notably larger, peculiar things become obvious. In particular, the President's enlarged eyes in the photo and the pixels that surround his head and arms, but are not present in any other part of the picture. Zoomed in, this is what it looks like:

But we see pixels around his tie too? Oh never mind it is more important to blah blah blah (heh) about why are President Ladysmith Black Mambazo's eyes so big and bulgy? Also, he does not throw a football the same way he throws a baseball, Q.E.DUH!

On top of it all, this throwing motion does not match Mr. Obama's previous photo ops. Compare the new picture's motion with this one of Mr. Obama throwing a baseball (click for better resolution):

You should notice several things right off the bat. The picture on the left is less heavily pixelated. More importantly, however, with the picture on the left, Mr. Obama's left arm has decidedly more bend in it, his right arm is lowered, and his shoulders are more squared.

So, is this picture doctored? It's up to you to decide. However, the fact that the White House may have altered a picture of the President throwing a football speaks to how despereate they are to perfectly manicure his public image.

That is exactly what we have been saying all along! It's not a matter of jpeg compression or other supposed "facts," like the uncompressed version up top that we stole from LittleGreenFootballs, it is that the FACT that some people think they "may" have altered it is all the proof you need of the White House's "despereation"! It is called Logic, and "Aurelius" at PunditPress is full of it! [PunditPress/LittleGreenFootballs]