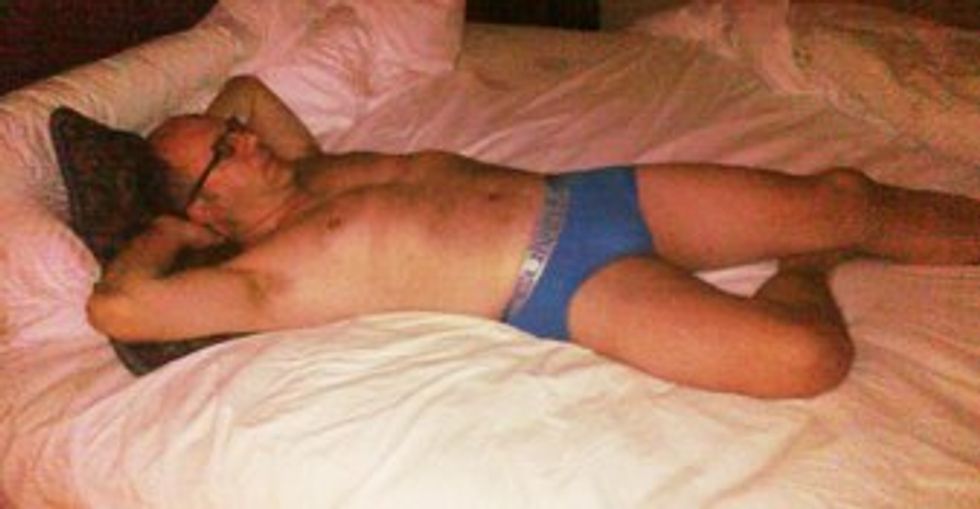 Ah, the old "probably it was some guy who broke into my hotel room and took pictures of me sleeping in my underwear" excuse. Medford, New Jersey mayor Chris Myers is here to fill the weekly news slot reserved for the outing of one or another garden variety self-loathing, escort-loving closeted Republican politician with aweak claim that he is totally clueless as to how a California rentboy got all those photos of Myers and his magical Superman-sized briefs asleep in a hotel bed (along with pictures of his IDs and his cell phone number). Or, uh, Photoshop maybe? Probably it was the terrorists with their Photoshop.

The photos appeared on a website started by the anonymous angry California rentboy, who claims the straight-married father of two inexplicably offered to buy him a car and then didn't follow through on the promise. (Note to rentboy: "politician" is the top thesaurus-listed antonym for "promise keeper," what were you expecting?)

Here is the weird denial Myers gave to PhillyBurbs.com:

Myers also said he has been to California and many other places around the world on business, but he couldn’t say whether he was there in October 2010 when the alleged incident occurred.

Myers said he wasn’t even sure the photos were of him and wondered if they had been altered.

“I’ve been down that road before, where a photo has been photoshopped to look like something it wasn’t,” he said, declining to provide specifics.

He said the bag with his identification in it was easily accessible and that someone could have sneaked into his hotel room to capture him sleeping and take photos of his personal ID cards and badge.

“I just don’t know. There are crazy people and I’m not going to justify craziness,” he said.

Myers is also declining to have the matter investigated, to save the anonymous rentboy the embarrassment, probably. [PhillyBurbs.com]