No, Bristol Palin, Hillary Clinton Is Not Afraid Of Your Grizzly Mama 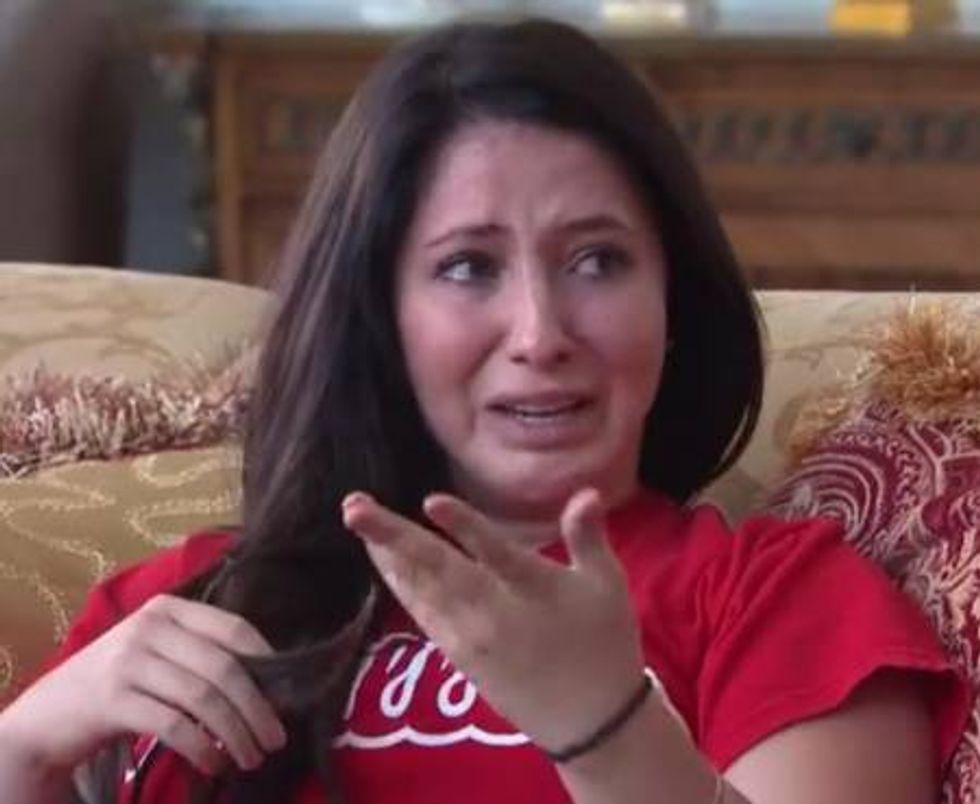 Cry all you want, still gonna call you A Idiot.

OK, now that we have yelled at (some of) The Gays about how Hillary Clinton's "anti-gay" email is kind of no big fucking deal, it is time to yell into the hollow cavity of Bristol Palin's brain, because SHE has read the same email! Does she have "thoughts" on it? Sure, if you'd like to call them that. You see, Hillary said in her 2011 email about a proposed change to passport forms which would explicitly acknowledge gay parents, that she didn't support it at least IN PART because it would send mouth-yapping Alaskan snowbilly grifter thing-hole Sarah Palin, whom Bristol calls "Mommy," into a mouth-yapping Fox News-gasm of a frenzy.

And so Bristol, after checking her womb to make sure Jesus hadn't tagged her with another litter while she was sleeping, read this email what mentioned her mommy, and commenced to gleefully LOLing, which caused her to cough so hard on the smoke from her Virginia Slim, she peed a little:

Hillary’s greatest hits just keep coming… and this time, they reveal that she is terrified of my mom! [...]

The liberals like Hillary Clinton would have you believe all sorts of lies about my mother. But, behind closed doors, we find out all sorts of truths, including the fact that Hillary fears my mom’s power.

Maybe that’s because she knows deep down that millions of Americans know that what my mom talks about in public is right and what Hillary pretends to stand for is wrong.

No, Bristol. Hillary Clinton is not "terrified" of your mother. Hillary Clinton knows that your mother is an obtuse, barely literate skidmark on the dirty Pull-Ups of America, a woman who really should learn to speak English and assimilate into our culture if she'd like to stay here. She knows your mother's indecipherable toddler-speak is to the American wingnuts' liking, and she probably calculated that, at that very moment, it would be a giant pain in America's collective ass for your mommy to be out there riling up the paste-fucking hordes, while the Obama administration was busy doing grown-up work.

But, but, but! Maybe this means Hillary is a secret homophobe, just like Bristol, except for how Bristol is very public about being a stupid bigot?

Hillary Clinton, the great tolerant one with rainbow Twitter avatars granting open-mindedness to any family formation under the sun, seems a bit more traditional in private than she does in public.

One might call it hypocritical if it didn’t come across as so focused on self-preservation instead of any actual policy stance.

But this is just more of the same of what we’ve come to expect from Hillary Clinton. Does she actually believe anything or is she just seeking power and trying to avoid embarrassment?

Oh Bristol. Dear, sweet born-yesterday-out-of-a-turnip-truck's-vagina Bristol. You see, there is a problem in this country, and it's called "Palin voters." They're very stupid, and when they win, they hurt America. And Democrats have been trying to work for justice and equality for LGBT people for a long, long time. But in order to be successful, they've had to employ careful strategery to git 'er done (like the boys always seem to say about a month before you find out you're pregnant). Hillary Clinton, when she sent that email, was already hard at work for the cause of LGBT rights both in U.S. America, and also all around the world. Her record is stellar, actually! But maybe it wasn't time yet to advocate for that specific policy change, especially while your foul smegma-sicle of a mother was still capable of dominating airwaves.

Bristol, if you would like to learn things about how the fight for LGBT equality has gone as it pertains to Hillary Clinton (who is, again, not afeared of your bugfucking crazy mother), you are free to read our wonksplaining article. If you'd like to remain ignorant (and we know you would), 'tis a free country. If you'd like to flit off to teach a class on how to do abstinence as good as you do, knock yourself out.

And of course, there's one more option, Bristol: You could fuck off.