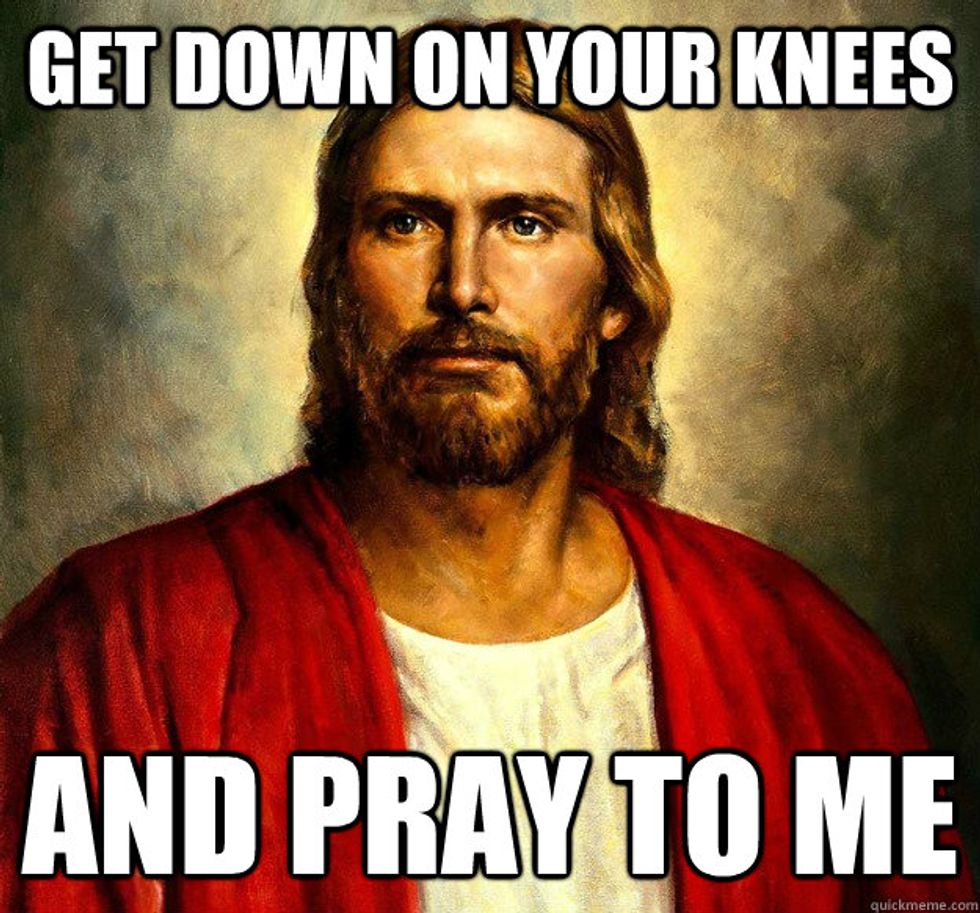 North Carolina's Lincoln County doesn't have any Jewish, Muslim or Hindu houses of worship, but that does not mean the godless liberal Ay-rabs, with their San Francisco Sharia Law values, aren't currently attacking the poor Christians who populate the rural county. This is why Carrol Mitchem, chairman of the Lincoln County Board of Commissioners, has chosen a particularly stupid passion in life, which is making sure all county meetings start with prayers to Jesus, only Jesus, and definitely none of them Funny Gods from Foreigner-ville:

In response to a question concerning Rowan County, which was recently ordered by a federal court judge to cease its pre-meeting prayers, Lincoln County Board of Commissioners chairman Carrol Mitchem said that not only will invocations remain in Lincoln County, but that he would see to it that no non-Christian prayers are delivered on his watch.

“A Muslim? He comes in here to say a prayer, I’m going to tell him to leave,” Mitchem said. “I have no use for (those) people. They don’t need to be here praying to Allah or whoever the hell they pray to. I’m not going to listen to (a) Muslim pray.”

Yeah, Allah or whoever the hell else! Because we all know that the Muslims like to surprise folks. They start out with an "Allahu akbar," but before you know it, they switch things up and pray to Barack Obama's Kenyan grandmother, like the Koran demands!

At issue is a ruling in nearby Rowan County, where the commie America-haters at the ACLU filed a suit over the behavior of the county's commissioners, who were known for "making derogatory comments about religious minorities to the press and almost uniformly confining the prayers to one religion." Somehow, a judge agreed that that is Not What The Constitution Says about freedom of religion, and smacked them down. Oh well, Rowan County, you were a nice place before they KICKED JESUS OUT.

But those Lincoln County officials are not about to stand for it! Use your words to give us more knowledge, Commissioner Mitchem:

“Changing rules on the way the United States was founded, Constitution was founded (I don’t like),” Mitchem said. “I don’t need no Arab or Muslim or whoever telling me what to do or us here in the county what to do about praying. If they don’t like it, stay the hell away.”

That's right! Even if you live in the county and you just want, once in a fucking while, for your county government to at least acknowledge that you exist, you should just GO BACK TO AY-RAB LAND.

Another commissioner, Alex Patton, says they're not discriminating, because he doesn't think "there’s any Jewish pastors or anything like that in Lincoln County.” See? There's no Jew Pastors (OR WHATEVER THEY'RE CALLED) in Lincoln County, so everything's fine! Of course, he is also whining, because he says that atheists are ruining everything, and that religious freedom applies to him too, as a persecuted, oppressed Christian in a county entirely populated by and controlled by persecuted, oppressed Christians.

Won't somebody lift up a word to the Lord for these people? But only the Jesus Lord. If you pray for them in Allah's name, the Lincoln County Commission is bound to come down with another case of the redneck stigmata, which is just messy.