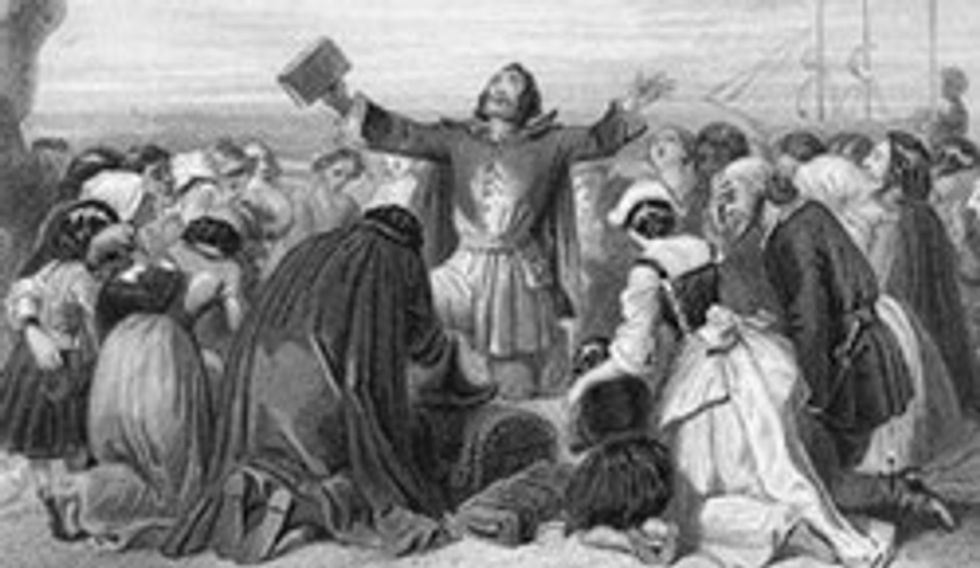 Are you a Muslin, or a Jewish, or a Godless, or a witch? Then it is time for you to get the h-e-double-hockey-sticks out of North Carolina! Republicans there -- including the House Majority Leader -- havesponsored a bill saying that mean ol' Constitution, despite a couple centuries' worth of law and jurisprudence and such other big ol' words that when you come down to it really don't mean nothin', doesn't actually bar them from declaring Christianity the state religion, which is why Joe Biden is the Pope of Maryland and Massachusetts still outlaws Christmas and burns the witch. State religions for everyone, yeehaw! Vermont can be Unitarian. California will be Scientologist. New York will have endless battles and putsches and holy wars and jihads between reform, orthodox, and whatever that third one is. Liberal? Is that a thing?

Yes, North Carolina Republicans are actually trying to take us back to what the Founders intended, if by "founders" you mean Roger Williams, and you also mean the people who kicked him out of Massachusetts for not practicing their precise flavor of Christian hoodoo but rather a different flavor of Christian hoodoo. (We think it was John Winthrop who kicked him out, probably, but it's been a long time since we read The Wordy Shipmates.) Remember when they just wanted to take us back to the 1950s, and then the 1850s? Well you ain't lived till you've met the 1650s.

Now all those legal scholars making law for the folk in NC have determined that that First Amendment -- the one that says Congress shall make no laws respecting an establishment of religion, or prohibiting the free exercise thereof -- only applies to CONGRESS, and not to our 13 states. (They also seem to think the Supreme Court can't determine what's constitutional and what ain't for the states. As we are not a lawyer, we don't know if Marbury v. Madison applies in this case, but we know of another case or two where the Supreme Court ran roughshod over states' rights and shoved things down their throats.)