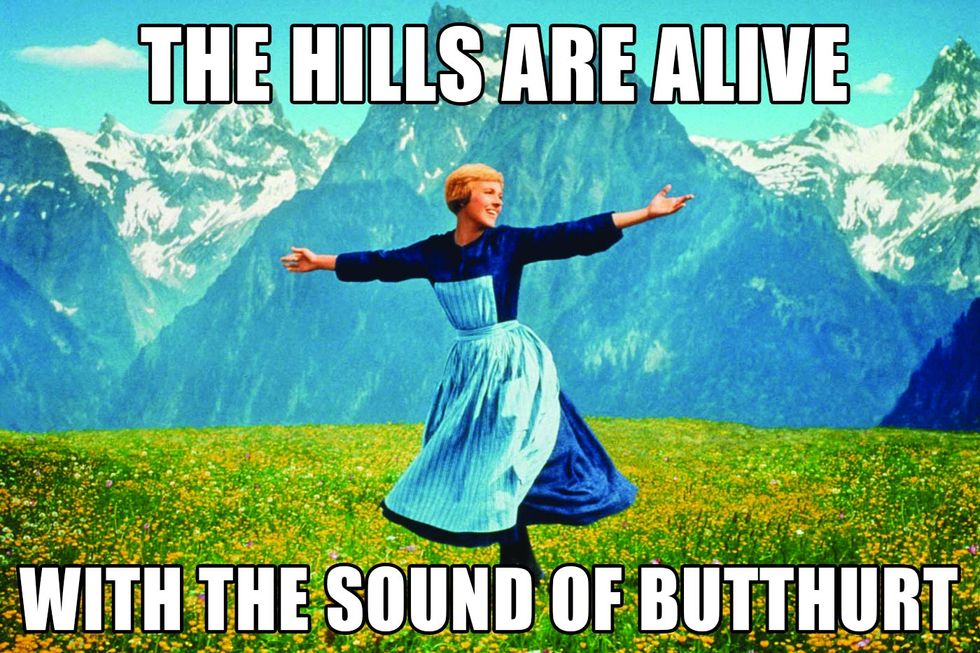 The letter, in part, reads:

Title VII prevents an employer from discriminating against an individual on the basis of sex and from otherwise resisting the full enjoyment of Title VII rights. [...] Federal courts and administrative agencies have applied Title VII to discrimination against transgender individuals based on sex, including gender identity. [...]

Denying [access to gender-segregated restrooms] to transgender individuals, whose gender identity is different from their gender assigned at birth, while affording it to similarly situated non-transgender employees, violates Title VII.

OK, Justice Department, but did you hear about how OUR WIVES AND DAUGHTERS are currently making poops in all the North Carolina restrooms, and they don't want some man in a dress in there sniffing around? Haha, just kidding, this is not about men in dresses, despite uneducated, pork-breathed wingnut screams to the contrary.

Speaking of those screams, here's dumbass Gov. McCrory, being butthurt about the letter:

McCrory, speaking before business leaders Wednesday evening at 6:30 PM dismissed the Department of Justice's three-page letter detailing why HB2 is illegal by claiming it is the "interpretation of just one agency in the Obama administration." He apparently also suggested the Civil Rights Act of 1964 does not apply to private businesses, which is false.

The fucking Justice Department is "just one agency." Better wait to see if the EPA agrees!

A claim by the Obama administration charges that one part of House Bill 2, which requires state employees in public government buildings and students in our universities to use a restroom, locker room and shower facility that match their biological sex, is now in violation of federal law. The Obama administration has not only staked out its position for North Carolina, but for all states, universities and most employers in the U.S.

The right and expectation of privacy in one of the most private areas of our personal lives is now in jeopardy. We will be reviewing to determine the next steps.

"A claim by the Obama administration." Who in tarnation does Barack Obama think he is, the goddamn president of the United States or something?

The Charlotte Observerpoints to more weeping and gnashing of teeth from North Carolina Republicans, and it is hilarious. Here's a sampling of that, starting with North Carolina House Speaker Tim Moore:

“It looks an awful lot like politics to me,” Moore, a Kings Mountain Republican, told reporters. “I guess President Obama, in his final months in office, has decided to take up this ultra-liberal agenda.” [...]

“To use our children and their educational futures as pawns to advance an agenda that will ultimately open those same children up to exploitation at the hands of sexual predators is, by far, the sickest example of the depths the … administration will stoop to (to) ‘fundamentally transform our nation,’ ” he said.

[wonkbar]<a href="http://wonkette.com/600858/radical-liberal-judges-affirm-bizarre-transgender-pooping-rituals"></a>[/wonkbar]Sadly for these North Cackalacky bigots, the Obama Justice Department has consistently ruled that transgender rights are protected under federal law -- often they cite Title IX of the Education Amendments Act of 1972, as Justice also does in the above letter, instead of Title VII of the Civil Rights Act -- because by discriminating against them based on their gender identity, you are inherently discriminating on the basis of gender, so fuck you. Moreover, the 4th Circuit Court of Appeals (which covers North Carolina) just ruled that the Obama administration's interpretation of Title IX is absolutely correctomundo!

The point is that what North Carolina is doing is against a lot of federal laws, and these gopher-fellating fuck-ups need to shut their goddamned mouths and fix it.