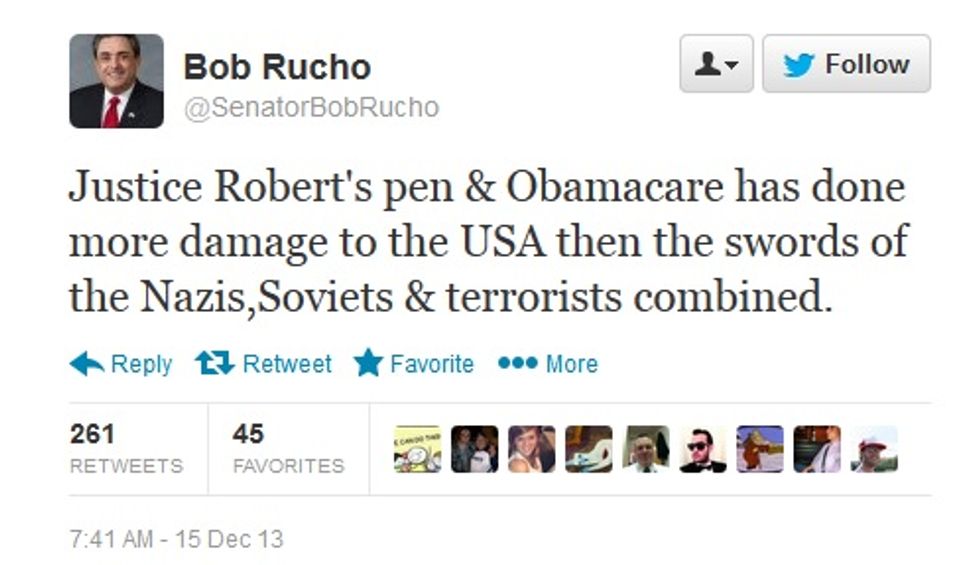 We're actually a little sympathetic to North Carolina state Sen. Bob Rucho, who twatteredthis over the weekend. Metaphors are hard, and sometimes when you really dislike something, it's hard not to just pile on. After all, for heaven's sake, people have been comparing Obamacare to the Nazis, or to the gulags, for years now. So why not just slop in a little of everything? And so we learned just how bad the Supreme Court's upholding of the ACA truly is:

“Justice Robert’s pen & Obamacare has done more damage to the USA then [sic]the swords of the Nazis,Soviets & terrorists combined.”

Honestly, nothing that hasn't been said before; why is anyone disputing this?

And yet people did find fault with the comparison, somehow. In fact, they called it things like "ridiculous," "a joke," and "an embarrassment." Others even had the temerity to point out that that the Nazis, the USSR, and terrorists have killed rather a large number of people, while the death toll from the ACA is as yet undetermined.

Rucho was not pleased with such nitpicking. He just wanted to call attention to what a witty play on a cliché he had accomplished, and on Sunday called his critics on their failure to even notice:

“Those that tweeted, put your thinking caps back on: ‘The PEN is mightier than the SWORD.’ Edward Bulwar-Lytton,1839. [sic] But surely you knew that.”

God, you guys, can't you see he is just making a point, is all? He even cited his source, which should count for something. It's not every day you get a source for somebody's cliché, after all. Why are all you internet dummies so dumb?

Mr. Rucho's quest for hyperbolic supremacy was overshadowed almost immediately, however, when someone else on Twitter said that Obamacare was worse than the Nazis, the Soviets, terrorism, the Khmer Rouge, and the Star Wars Holiday Special.

If you don't follow Doktor Zoom on Twitter, you are worse than Hitler, Stalin, and Paula Nancy Millstone Jennings.