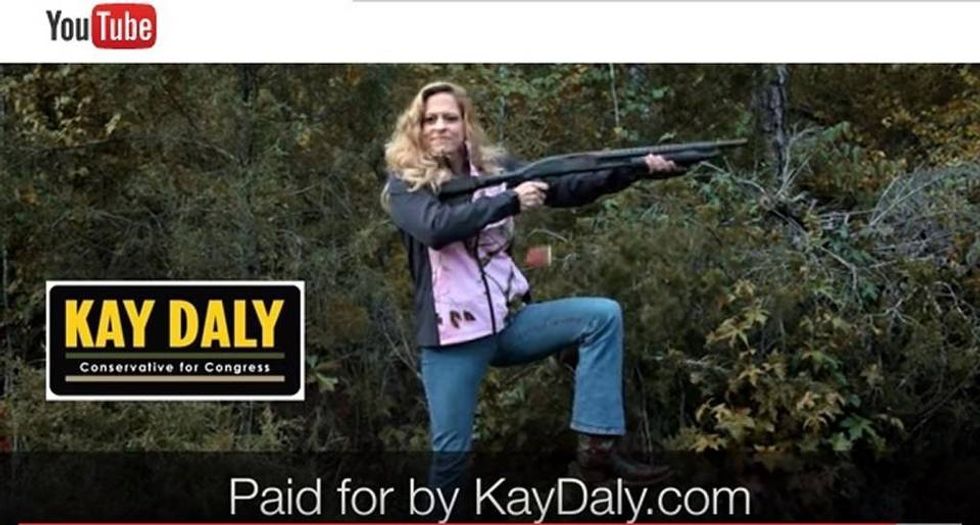 Should somebody call the cops?

It's time to meet our new best friend, aren't you excited, Wonketariat? Her name is Kay Daly, and she is running for Congress in the North Carolina district currently served by Renee Ellmers, who is an obvious RINO. What's so bad about Ellmers? Oh, this one time she said bitches might not be lyin' when they say they've been raped. And she doesn't even know the difference between LEGITIMATE RAPE and the other fake kind. But she's done good Republican things too! Like the time she said it's totally cool to shut down the government, as long as you still sign HER paycheck. And another time she whined about how guns are great, and it totally wasn't her fault that her husband's AR-15 got stoled by a criminal, despite how she and her husband didn't have their precious penis gun locked up in a safe.

Anyway, Ellmers is a fucking RINO and Kay Daly is not, says Kay Daly. And she has a sexxxy campaign video wherein she explains that Ellmers is gay married to homosexuals and feminists, and it's time to take North Carolina back, blah blah, the point is that at the end she shoots a gun and says, "I'm hunting RINOs. Care to join me?"

HAHAHAHA, get it? She is going to shoot people who are more liberal than she is, with a gun! Do you want to help her? This is a totally normal political ad, that threatens murder.

But maybe she is just saying a tease. Maybe she will read this Wonket piece and think to herself, "Haw haw, you don't get it, you stinkin' PC liberal! Huntin' is just part of our culture! We don't mean no harm by it, joke joke joke!"

And maybe that's what's really going on here. A joke that we, the dumb coastal elitist liberals, do not understand, about murdering people. Or maybe this lady is a bit unhinged and these are the warning signs of mental health problems that we always hear about in the aftermath of mass shootings. Why did nobody say anything when Kay started aiming her gun at people and threatening to kill them? Why didn't we take it seriously?

Anyway, Rep. Ellmers: We don't agree with you on much of anything, but please be careful. Your opponent is not right in the brain.