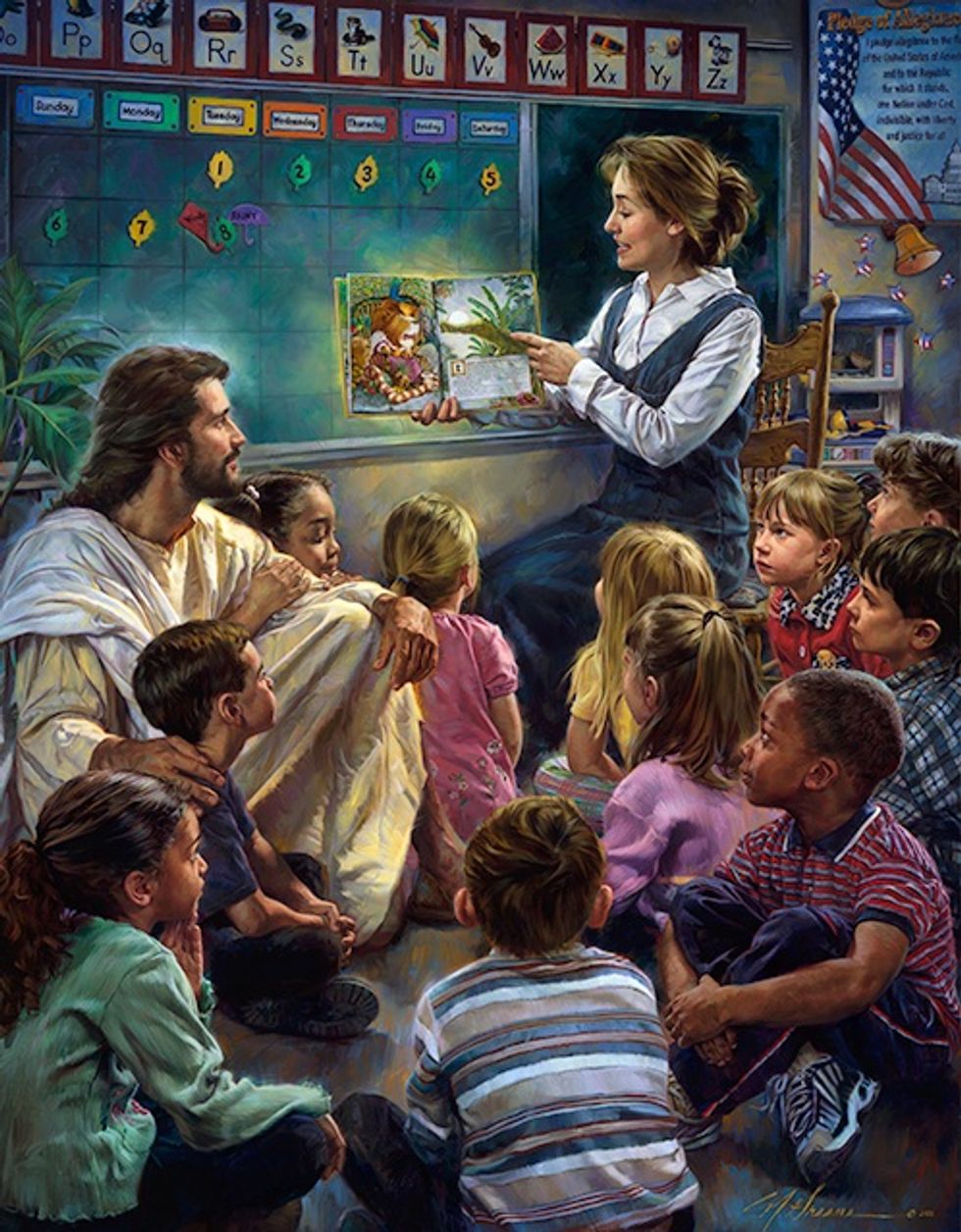 Your tax dollars at work

[wonkbar]a href="http://wonkette.com/497377/heres-a-surprise-school-vouchers-help-spread-creationism"[/wonkbar]Time for another update on the wonderful world of "School Choice" -- taking taxpayer dollars from public schools and giving them to private schools, to help improve education all around. Or at least help people running religious schools make a buck. As we've noted previously, a whole lot of tax money is going to schools that are explicitly religious, which you might think would violate the First Amendment, but thanks to a 2002 Supreme Court decision, it's cool, because it's all about parental choice. And so we have taxpayer money going to teach creationism, and even in some cases to pay for kids to attend religious home schools. And now, a major report on North Carolina's voucher programs finds that a full 93 percent of school voucher funds are going to private religious schools. If that percentage doesn't make your jaw drop, you can also feast your eyes on the raw numbers, which seem even more incredible somehow:

North Carolina calls the vouchers "Opportunity Scholarships," and in the current school year, about $11 million of the program's $12 million budget has gone to mostly Christian schools, although some has gone to Islamic and other faith-based schools. A whopping $800,000 has gone to secular private schools. Students who qualify get up to $4,200 each, which is a great deal for the state, since public schools spend roughly $8,800 per pupil. The average private school cost is similar, so most parents with vouchers have to make up the difference, although a niche market of Christian schools has sprung up which just happen to charge exactly $4,200 a year tuition. It's like a blessing from God! Or the GOP. A supporter of the program, Republican state Rep. Paul "Skip" Stam, rhapsodizes about the vouchers: “The government saves, the parents are happier, the children are being educated.” And the government schools are being starved for funds, so that's good, too!

The Charlotte Observer's in-depth report on the voucher program notes that while charter schools in North Carolina have to accept all students, like public schools do, private schools receiving vouchers "can’t discriminate based on race or national origin, but they can refuse students who don’t meet academic, behavioral or religious requirements." That way, the public schools can be left as the dumping grounds for the kids with learning disabilities or whose parents can't come up with the extra funds for the private programs. And unlike public charter schools, private schools getting voucher cash "aren’t required to give state exams, disclose data to the public or face the state ratings and report cards that are required for district and charter schools." Opponents of throwing public money at religious schools, like Keith Poston, president of the Public School Forum of North Carolina, points out that while public schools are forced to meet increasing accountability standards, the voucher schools barely have to do more than prove that they have some kind of instruction going on:

“I would say ‘inconsistent’ would be a charitable way to describe that,” Poston said. “I know that there are some very good schools that are participating, but how many are not doing a good job and how many kids are being shortchanged?”

But is that really fair? Shouldn't they simply be judged on how well they teach the love of Christ? While voucher schools could conceivably just pray and sing about Jesus all day long, most make an effort to throw in some academic work, too. Mark Helmer, the principal of the "lower school" (a quaint way to say "elementary") at Covenant Day School in Matthews, North Carolina, explains that the academic work is designed to help children understand religious principles, too (at taxpayer expense, thank the Lord!):

“We really emphasize what we would call teaching from a Biblical world view,” Helmer said. For instance, he said, classes might discuss how the themes of a novel relate to the Bible or how God’s creation is reflected in the order of mathematics.

In Covenant’s science classes, lessons about the origin of Earth start with the premise “In the beginning God created ...” then explore a range of interpretations, including evolution, said Head of School Mark Davis.

We're going to guess that the coverage of evolution consists of asking, "Were you there?" The Observer piece also profiles an Islamic school that gets voucher money, noting that while the school uses the same textbooks and curriculum as public school, a part of the day is devoted to "prayer and religious study." Who knows, maybe good old bigotry may help here: If enough parents learn that their tax dollars are going to support Islamic schools, they might have a freakout about it like some did in Louisiana a few years back, and rethink the idea of using public money to pay for religious education.

In the meantime, North Carolina's voucher program is booming along, and expected to almost double in the coming school year, bringing more little children to Jesus, exactly as the founders wanted when they wrote the First Amendment. Amen.