Not Sure How To Say This, But Devin Nunes Is Stupider Than We Thought 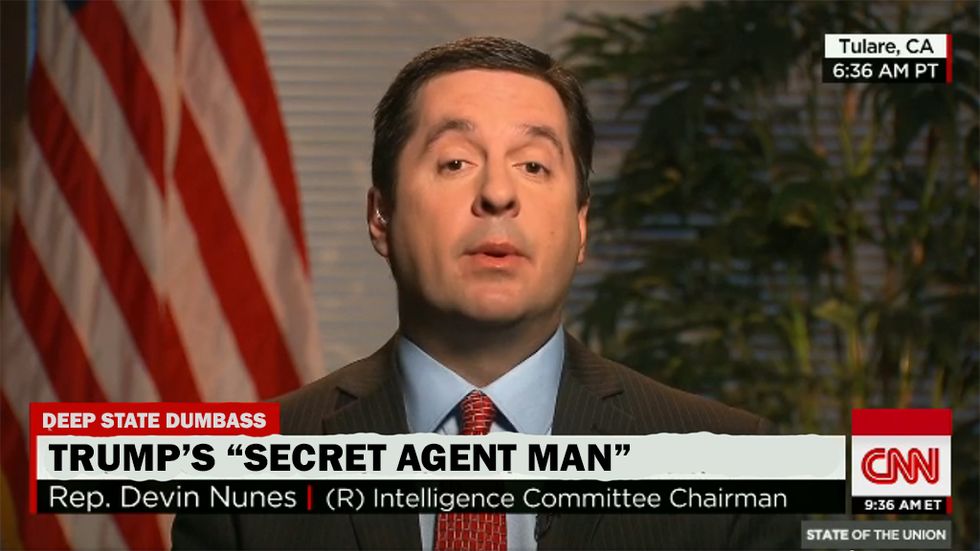 Guys. We think you need to sit down for this one. Devin Nunes, Donald Trump's slow-witted pool boy, is dumber than we thought. Yes, we thought he had hit rock bottom when he released that hilariously stupid memo, the one that debunked its own premise on the last page. And we thought he hit rock bottom when he did ... um, well basically everything Devin Nunes has ever done in his life pretty much screams, "Pick me last for the Knowledge Bowl!"

But it's worse than we knew.

The Washington Examiner reports that Nunes attended a private dinner for wingnuts Wednesday night in DC, and no, it does not say whether he brought a dairy cow as his date, or whether Devin and/or the dairy cow had "I just had sex" hair when they showed up, but it sure does report on what he said when he started making words with his dumb mouth. Feast your eyes:

“When Mueller was first appointed, I actually sent out a press release that said, this is great, because they’re going to quickly come in, and see what we’ve seen, which is that there’s no evidence whatsoever of collusion, but he’ll immediately go after the crimes which we know have been committed,” he said.

Devin Nunes doesn't even know why there's an investigation anymore, because Paul Manafort is the only one who could have POSSIBLY colluded with Russia.

“Now look at who Mueller has prosecuted at this point, and who is left to prosecute for collusion?” he wondered. “I mean, there’s no one left. [Former Trump campaign manager Paul] Manafort would be the obvious guy to think of that was colluding, right? If you could have gotten him on collusion, he would have been the obvious choice."

OK, first of all, there are a fucking MILLION people Mueller could end up prosecuting. Donald Trump Jr., Jared Kushner, Michael Cohen, Donald Goddamn Trump, and many more, just off the top of our head.

But secondly, and Trey Gowdy we cannot believe we are asking you for help right now but you are a country lawyer whereas your pal Devin is a country cow-fucker (allegedly) and he apparently does not understand that big boy prosecutors like Robert Mueller will often slam people on lesser charges in order to get them to flip, could you please 'splain him Law, How Does It Work, and that just because Mueller hasn't nailed Manafort's dick to the wall for Trump-Russia crimes, it doesn't mean he hasn't found them? K THX LOVE YOU TREY GOWDY BYE.

Devin Nunes knows who is a communist Russian spy and it is not Michael Flynn!

"Flynn, I mean, I knew Flynn very very well, and he is not a secret communist supporting Putin. So, they can’t get him on that. So who else do they have?”

Devin, baby. Sweetheart! The Berlin Wall fell and you were balls deep in a cow, allegedly! Brush up on the late '80s and early '90s, please, and come back to Congress when you can pass a 5th grade world history test.

No, scratch that, never come back. Your special dairy cow misses you when you're away anyway.