Nothing To See Here, Folks. Apparently Gay Men Beat Themselves Into Comas. 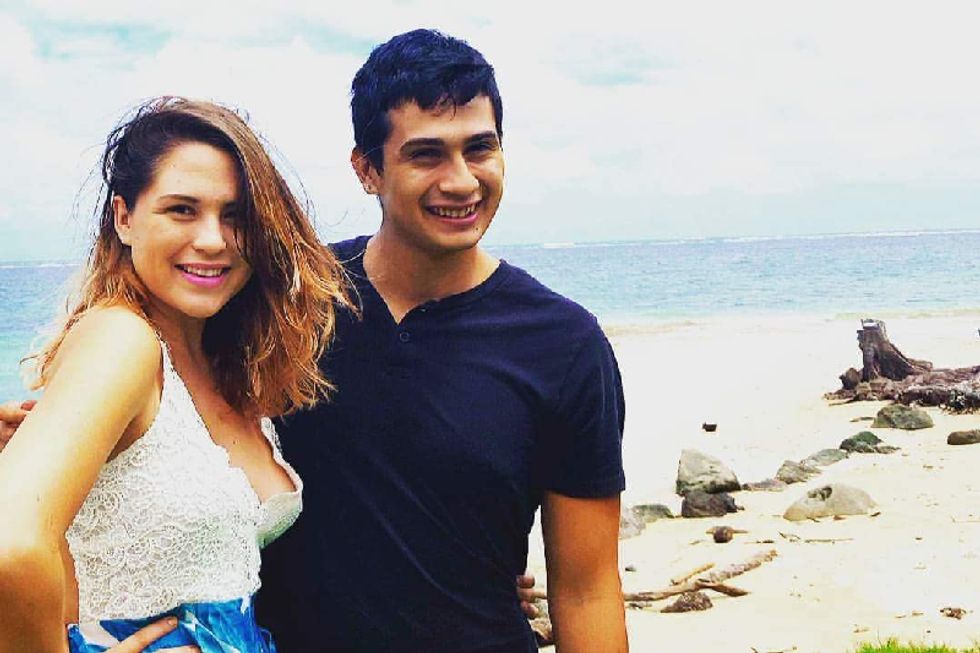 What a beautiful young man...

Aaron Salazar, a gay student at Portland State University was found apparently beaten near the Amtrak railway tracks, and the family says that for some reason it is being investigated as a possible suicide attempt. Salazar was traveling back to school and messaged his grandmother that he was going to spend some time with a "new friend" he'd met on the train. An hour later his broken body was found near the tracks, bloody, bruised, burned, and barely clinging to life.

What happened to Aaron Salazar? Who was this new friend? And was this an act of violent homophobia? We have no answers.

On what planet does a gay man leave a train with a “new friend” to explore, yet decide to beat themselves in the face, break their own pelvis, set their genitals on fire, and damage their own brain stem? Who jumps off of a train going 60-70 mph, yet does not have injuries consistent with jumping off of a train?

This doesn't happen on any planet that we have been to, and let’s be clear, it IS reminiscent of lynchings performed on black bodies during the Jim Crow Era. You may recall that genital mutilation and burning were two of the forms of torture used on black people during these terrorist acts. It is completely understandable that many people are skeptical and demanding answers.

His mother shed some light on the extent of his injuries and on his condition when she saw her son after this horrifying incident.

Something happened there. You can’t say a kid, you know, jumped out of a train or fell out of a train and this kid does not have no injuries consistent with a train going 60 to 70 miles an hour. No damage to his clothes. There’s not a scratch on his arms or his legs, and you’re flying out of a train? It makes no sense to me. I honestly believe that he was beaten.

Apparently the doctors also agree that his injuries are consistent with a beating, though they have not put it in writing while the investigation is pending.

And why are Amtrak Police apparently looking at suicide as a possible motive? The hell if we know! It sounds bizarre as fuck and it is no wonder that the family has enormous concerns and find the investigation problematic. It leaves some people, especially those in the LGBTQ community and their allies, wondering if, in fact, Amtrak Police are covering up a hate crime. It wouldn’t be a surprise to those who remember when an Amtrak officer murdered an unarmed man.

The family also says that the Amtrak Police Department is not being very forthcoming with information; in fact, they resent the fact that the Police suggest that there was "no criminal intent" apparent.

Since when has beating someone within an inch of their life not been criminal? Is it even humanly possible to abuse oneself to that extent while remaining conscious enough to try to finish yourself off? None of this makes any sense.

The Truckee Police have also issued a statement on Salazar’s case, though there is not much information coming from law enforcement. They reiterated that the investigation is not being performed by the Truckee Police and clarify that the incident was not related to Truckee or the residents.

Recent media reports and social media posts have suggested that a young man named Aaron Salazar was found along the railroad tracks in Truckee, CA and that he was possibly the victim of an assault and hate crime that occurred in Truckee. It is the policy and best practice of most public safety organizations to not comment on another agency’s investigation, particularly if that investigation is active. However, since much of the information that is circulating on social media and in some news stories is inaccurate, speculative, or simply false, the Truckee Police Department would like to clarify a few things.

First and foremost, our most sincere and heartfelt thoughts are with Aaron, the Salazar family, and his friends. We are worried for Aaron, and want him to quickly recover.

We are not actively involved in the investigation and do not know what happened to Aaron or what the investigation might reveal. Amtrak is the most appropriate authority for this investigation being that all information indicates that the incident was confined to occurring on an Amtrak train. Amtrak Police clearly have jurisdiction over incidents connected to their trains and it is important to allow the investigative process to divulge what likely happened.

On May 15, 2018, at approximately 11:30 a.m., the Truckee Police Department responded to a call regarding a person lying near the railroad tracks at the far east end of Truckee. When officers arrived, they located a person with significant injuries laying only feet from the railroad tracks. That person was quickly identified as Aaron. Officers assisted with medical aid, and Aaron was transported to Renown Medical Center in Reno, NV.

It was almost immediately discovered that Aaron was a ticketed passenger on the west bound Amtrak train that had passed through Truckee earlier that morning. Because the incident originated and appeared to be entirely contained on the Amtrak train, the Truckee Police Department turned over the investigation after our preliminary response. Aaron never disembarked in Truckee, as he never made it to the Truckee station, and there is no information to suggest Aaron had any connection to Truckee or interactions with anyone from Truckee.

The Truckee Police Department will never allow a conspiracy or cover-up to occur regarding any incident or investigation. Any suggestions to the contrary reflect a lack of factual information or knowledge of our organization and community. The Truckee Police Department will also never allow a crime against the LGBTQIA community to go unaddressed or uninvestigated. A case where a hate crime was committed would be addressed to the fullest extent of our capabilities. The Truckee community is not in danger and never was. We did not release information out of professional courtesy to Amtrak and to protect the investigative process as well as the confidentiality of the Salazar family.

We understand how frustrating it can be to not have all the information when there is genuine concern and a desire to help. The Truckee Police Department has no control over the release of substantive information in this incident, since another agency is handling the investigation. We do ask, out of respect for Aaron, his family, and for the investigative process that speculation, guessing, or rumors not be the basis for drawing conclusions.

Any information that might help the investigation or any requests for information should be directed to Amtrak Police at (800) 331-0008.

Keep Aaron and his family in your thoughts.

The difference between the two statements is striking.

The family of Salazar has set up a GoFundMe account to help cover expenses for the hospital stay, and they also have strongly pushed back on the attempted suicide theory. They say Salazar, a handsome young gay man, was NOT suicidal in any way, he was a student who enjoyed life and had family support. So why would a friendly young man who is loved by his family, respected by his peers, and had just messaged his grandmother suddenly be struck by suicidal ideation? The world is a fucked up place and we must do better in protecting discriminated groups. Time for the Amtrak Police to step the fuck up and get their shit together. Something terrible happened to this young man, and it is HIGHLY doubtful that he did it to himself.

Please donate now to help shine a light on evildoer.