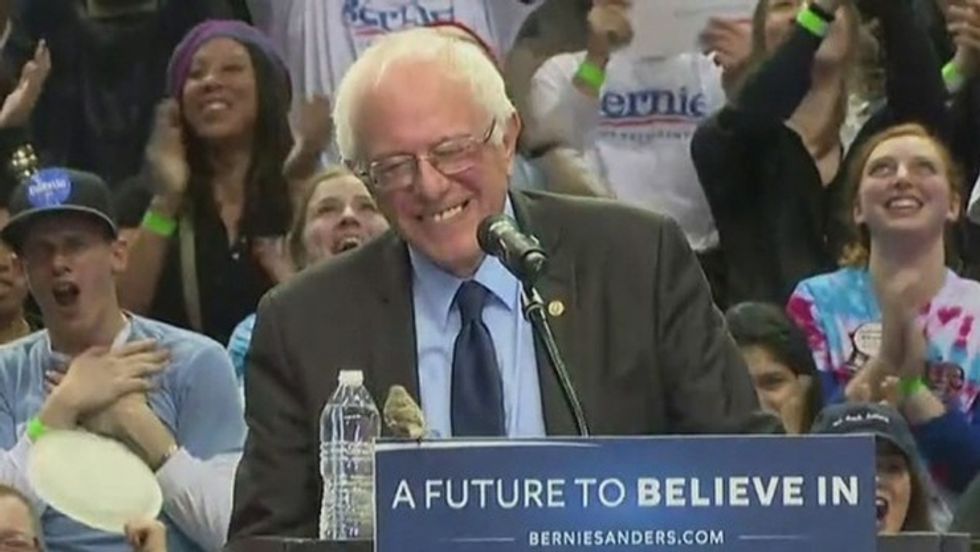 It's the House Finch of Proportional Representation!

The Bernie Sanders campaign has requested a recanvass of Kentucky's May 17 primary vote, and Yr Wonkette thinks that's a dandy idea, because that was one ridiculously close vote. Tell us more, Washington Post!

On election night, former secretary of state Hillary Clinton led Sanders by 1,924 votes out of 454,573 cast. That prompted her campaign to declare victory, and for Kentucky's election chief Alison Lundergan Grimes, a Clinton supporter, to tell news outlets that Clinton was the "apparent winner" of an upset.

Sanders never actually conceded Kentucky, and since both he and Hillary Clinton came out of Kentucky with 27 delegates each, Bernie's been calling Kentucky a "delegate tie," which sounds like what you might wear to your state convention, or perhaps a piece of equipment the cops would have on hand for Nevada, maybe. And even though CNN reported on election night that Sanders wouldn't request a recount, a Sanders spokesman told WaPo the campaign was still considering its options.

Considering that the most favorable outcome possible for Sanders would be picking up a single extra delegate, why even bother? Explains WaPo, it's about The Narrative:

For Clinton, the Kentucky vote was less about delegate math than a campaign narrative. A defeat there would have given Clinton just one win, in tiny Guam, for the whole month of May. Clinton's campaign, which had previously suggested that it would pivot to the general election, ended up spending money on Kentucky campaign ads as the candidate barnstormed the state -- one that is not expected to be competitive in November.

Or you could say FUCK YOUR NARRATIVE, COUNTING VOTES MATTER ON PRINCIPLE. No? Just us?

Picking up one more delegate from Kentucky would give Sanders another line for his stump speech, but a delegate's a delegate, and a recanvass isn't an extremely difficult process compared to a full recount. For one thing, the cost of a recanvass would be borne by the state, but the Sanders campaign would have to pay for a recount:

The recanvass would simply lead to a review of voting machine tallies and absentee ballots, to determine whether human error switched any of the reports to the secretary of state. At stake: One delegate from the sixth congressional district, which covers the state capitol in Frankfort and the state's second largest city, Lexington, and where the initial count found a Clinton lead of just a few hundred votes.

We like accuracy, too, and other, more sane states (and Alabama), automaticallyrecount if the margin of victory is less than a half of a percent. Hillary gets to win the nomination, Bernie might get to win Kentucky, and maybe certain really noisy people will stop going on forever about a stolen election. (Another winner? Democracy, yay!) Now, time for everyone to get on to the serious business of NOT KILLING EACH OTHER in the comments, which we do not allow anyway.