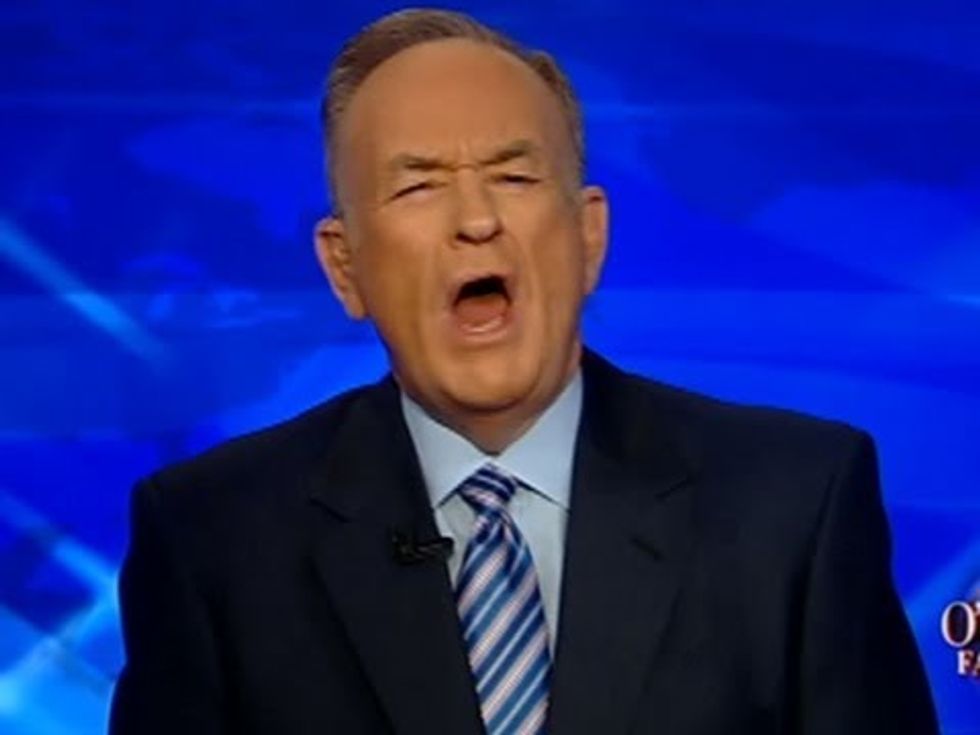 Just a couple days after the story broke of Bill O'Reilly's alleged abuse of his ex-wife, Maureen McPhilmy, court transcripts have surfaced that appear to support the allegation that Bill O'Reilly assaulted McPhilmy in front of their daughter several years ago. Gawker ran excepts from the transcripts of the child custody trial in which McPhilmy was recently awarded custody of the couple's two teenaged children. The transcripts cover the testimony of psychologist Larry Cohen, who was assigned by the court to interview all four members of the family: Billo, McPhilmy, and their two kids.

In one excerpt, Cohen is asked by McPhilmy's attorney, Casey Greenfield, whether either of the children reported witnessing domestic violence; O'Reilly's lawyer, Bernard Clair, objects to the questions. The couple's daughter is here identified only as "M":

Q: In the course of your meetings with the children, did either of them describe any incidents of domestic violence between their parents?

Q: And who was that?

A: M. reported—having seeing an incident where I believe she said her dad was choking her mom or had his hands around her neck and dragged her down some stairs.

MR. CLAIR: Your Honor, to the extent that that incident as alleged may have predated the signing of the agreement.

THE COURT: Counsel. Counsel, she asked the question, we got the answer. Let’s move on.

O'Reilly has denied the allegations, saying that "All allegations against me in these circumstances are 100% false"; it's not clear whether he meant that the psychologist or his daughter was lying, however. Maybe both! On orders from the Argentine military!

Are there more juicy tidbits? Well of course there are! Cohen also testified that O'Reilly ("Mr. Anonymous" in the transcript) told his daughter, who was about 15 at the time, that her mom was a filthy hoor, and that her stepfather was a cad, to boot:

Q [Greenfield]: What sorts of things did M. tell you that Mr. Anonymous says about their mother?

A [Cohen]: That she is an adulterer, and that her husband is, M.’s new stepfather is not a good person, and oh, if she spends her time or more time at the mother’s home, it will ruin her life.

Sounds like a great dad! Nothing helps a guy bond with his kids like accusing the other parent of whoring around. In another snippet, Cohen testifies that M told him that her dad might as well actually be "Mr. Anonymous":

Q [O’Reilly attorney]: And M. reported to you that her father was never around to have a relationship with her for 11 years, correct?

Q: And the word, when I emphasize the word “never,” that was her word, was it not?

Considering what he got up to when he was actually around, this may be the chapter of her eventual tell-all book that "M" will title Blessings In Disguise.

In addition, O'Reilly himself acknowledged to Cohen that he had trouble controlling his temper, that that he sometimes would "go ballistic;" as a way of cooling down, he would sometimes leave the house and punch a tree, perhaps a side effect of his contempt for environmentalism. "He said he worked hard to keep his emotions under control," Cohen testified. Again, this is surely a shock to anyone who's seen the infamous "Do It Live!" video, where a simple teleprompter error led O'Reilly to a fit of rage.

It should be interesting to see how O'Reilly and Fox News handle this latest round of documentation -- probably through the usual strategy of denial and counterattack. As for his reputation? The fucking thing sucks.