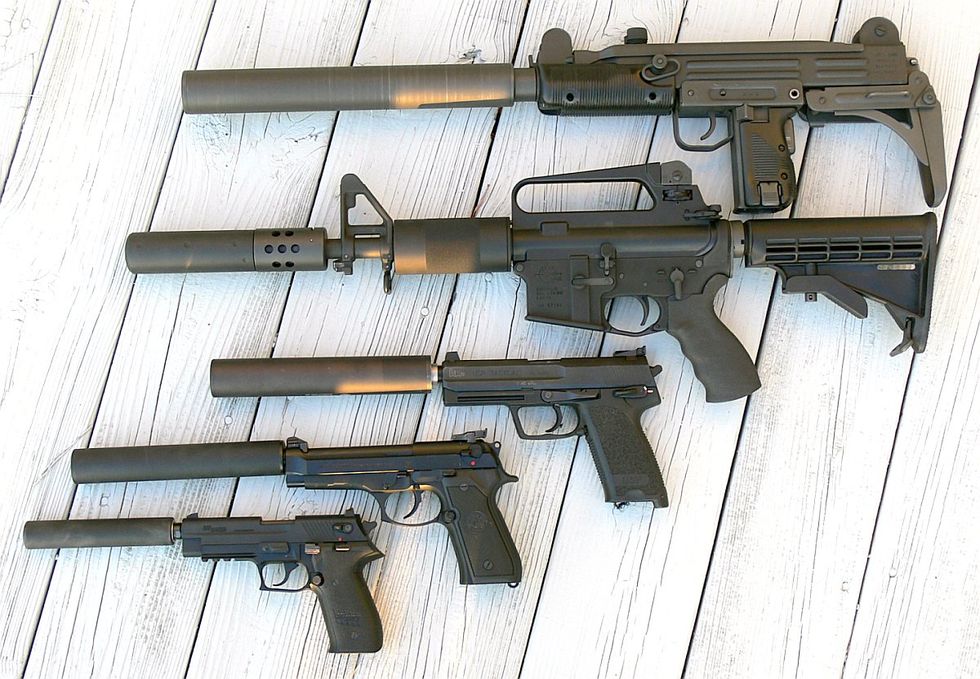 Pity the poor NRA! They dumped $30 million into Donald Trump's presidential campaign, and what do they have to show for it? Since The Black Guy left office, gun sales are down 10%! At this rate, they'll be lucky to take in $14 billion this year. Sad!

But dry your tears, Gunhumpers! South Carolina Congressman Jeff Duncan (R-Wayne LaPierre's Buttthole) is here to save your Real American soul. Yesterday the Natural Resources Committee held hearings on the Sportsmen's Heritage and Recreational Enhancement Act (SHARE). In addition to opening up federal lands for target practice and allowing hunters to import the skins of polar bears killed in Canada finally, Representative Duncan is sticking up for the right of the little guy to own a gun silencer. Because when you're culling the herd on federal land, ear protection is just such a hassle.

Right now, you have to undergo a background check, submit photo and fingerprint ID, and pay a transfer tax of $200 if you want to buy a gun silencer. Plus, the government keeps a record of your totally necessary sporting goods purchase. The Constitution doesn't even mention silencers! So how even can they stop you from buying them? Here's your sign!

This vicious assault on the Second Amendment will not stand! So Rep. Duncan will get rid of all that unnecessary red tape and force the government to destroy those intrusive records after they refund the money to anyone who paid the $200 since 2015. He axed the provision requiring the ATF to make it up to them with a free round of ammo and a hummer, so you know Duncan's a reasonable guy. He just wants all the pretty white girls in rural America to be able to shoot guns in the yard without those ugly earmuffs.

Also, too, when you're being carjacked by a gang of masked thugs, it's vital to be able to shoot them without causing a loud bang.

This vital bill was postponed in June after Congressman Steve Scalise and two Capitol Hill police officers were shot during Congressional baseball practice. If the lunatic shooter had used a gun silencer, many more people could have been injured or killed. But as we all know, guns don't kill people -- radical sharia antifa Obummer liberals kill people! Besides, any sporting equipment can be dangerous if used incorrectly. Why, you could stab someone to death with a tent peg! And they're not making Girl Scouts get a license to camp now, are they? Anyway, with a little prodding from the NRA, this bill is back on track.

Strangely enough, cops don't love this law. The Law Enforcement Coalition is not down with deregulating a hunk of metal that makes it easier to get away with shooting people, particularly police officers.

[Congress] needs to reject irresponsible calls to mandate the unrestricted concealed carry of firearms and allow free access to dangerous silencers, which present a new menacing threat to our communities and law enforcement professionals.

But maybe the Law Enforcement Coalition should have thought about that when they were writing campaign donations! If those cops don't want to get shot by a criminal with a silencer, they need to do their homework like the NRA. Per The Trace,

In the first two quarters of of 2017, the National Rifle Association has already spent more on lobbying than it did in all of last year.

The gun group has spent $3.2 million from January 1 to June 30 trying to advance its policy agenda, according to an analysis of data provided by Open Secrets, a campaign finance and lobbying watchdog. In 2016, the group spent $3.18 million pleading its case to legislators and federal agencies.

If you fail to plan, you plan to fail! And the NRA does not plan to fail, which is why it gives to Jeff Duncan every single election cycle. This here is what a patriot looks like.

Or possibly this is a whore who gives no shits about people getting shot as long as he keeps getting paid by the gun manufacturers. Beauty is in the eye of the beholder. And Jeff Duncan, who already tried to get this shit through in January in a bill called The Hearing Protection Act, is the prettiest girl at the Gun Nut Prom.

At any rate, Duncan's reacharound for the NRA will die in the Senate. If moderate Republicans don't kill it, then the Democratic filibuster will. But fuckyouverymuch all the same, Jeff Duncan. And may you get what you deserve. WITH VOTES.

Wonkette rants are sponsored by wonderful readers like you! Please click here to fund us or (by which mean "AND") here to help out our friends, Moms Demand