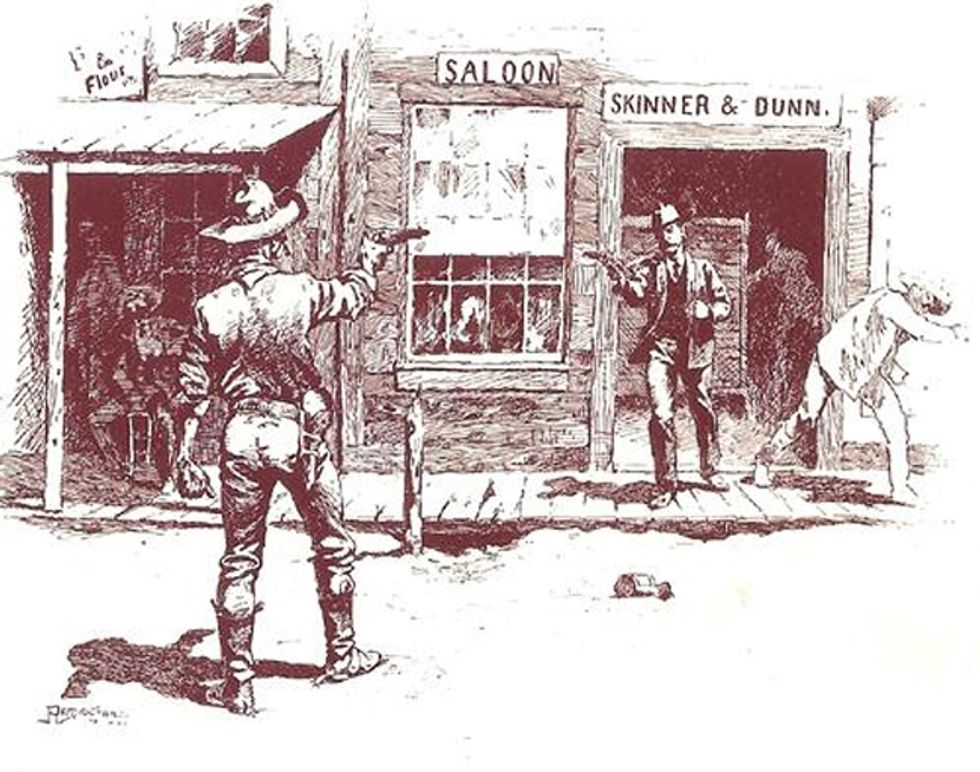 In the REAL Old West, lawmen often confiscated your guns while you were in town

[contextly_sidebar id="Ecl3zqoUVfMzmkCu4hEKLPafq4RlhUsU"]A week after pussing out on the chance to show up at CNN's "town hall" discussion of guns, where President Obama cruelly taunted them for bravely running away, the National Rifle Associated has issued its own challenge to debate Obama on guns, making it their idea and if he won't show up, it's because he's chicken, bawk bawk bawk.

[contextly_sidebar id="IGyRBGSUbTjMXWvXygl9sx1POyKaIZnM"]From the very first line ("Americans are growing more and more sick and tired of Barack Obama"), soulless beef-witted death-machine fetishist (and NRA executive vice president) Wayne LaPierre really turns on the charm in his Eight-Minutes' Hate, explaining that America is sick of Obama's "sanctimony" and "narcissistic celebrity," but more than anything, we're "afraid for America's future" like never before. Strange. Apart from rightwingers wetting themselves whenever anyone suggests guns shouldn't be sold to criminals, unstable people, or spouse abusers, we hadn't noticed quite so much fear. Then LaPierre lies a bit about Obama's executive action on incremental expansion of background checks:

The president unilaterally decreed that anyone -- any lawful citizen -- who sells, trades or gifts even just one firearm, might be vulnerable to arrest and charged with a felony.

Nah. That's a panic-tinged description of the background check expansion the NRA's pals in Congress murdered after Sandy Hook, but it's not what Obama actually ordered, which was far more limited: it would require anyone who is "in the business of selling firearms," to register as a firearms dealer and run background checks. Nobody's going to the gulag for giving their daughter a .22 for her birthday -- she can still shoot up a school and be immortalized in song.

So after some fearmongering about how regulations are so vague that Americans won't even be able to buy a cap gun without hiring a lawyer first (more repetition of "Arrest. Prosecution. Fines. Prison"), LaPierre explains that while Obama is simply waiting for a chance to imprison every law-abiding gun owner, he's also letting all the thugs run wild in the streets, because Obama loves all the "felons, criminal gangbangers, drug dealers, repeat offenders and illegal aliens" so much. Clearly, because he wants real (white) Americans to be at the mercy of these dusky-hued savages, Obama wants nothing less than to "ban every gun and bullet in America, and effectively turn us into Australia."

Mr. LaPierre may want to rethink this. The Land Down Under doesn't strike fear in the hearts of the average American. Beer, shrimp on the barbie, and Muriel's Wedding are hardly terrifying. We frickin' LOVE Australia. They've got surfing, too!

La-Pierre explains why the NRA shunned the CNN town hall: "[We] won’t get suckered into any of Obama’s fixed fights. Mr. President, pre-screened questions that lead to your long-winded answers are anything but an honest dialogue." Oh, look, more lying! The CNN program was arranged entirely by CNN, with no White House screening of questions (OH SURE WE'RE SUPPOSED TO BELIEVE THAT!!!!), and even gun proponent Kimberly Corban said since the program was live, she was able to ask whatever she wanted. An NRA spokesbullet had earlier told Fox News there was no point in appearing on CNN with the president: "So what are we going to talk about, basketball?"

So, having lied all the way through his prelude, LaPierre finally gets to his offer:

But I’ll tell you what. I’ll meet you for a one-on-one, one-hour debate—with a mutually agreed-upon moderator—on any network that will take it. No pre-screened questions and no gas-bag answers.

Americans will judge for themselves who they trust and believe on this issue -- you or the NRA.

Let’s see if you’re game for a fair debate. It’s your chance to show the American people you’re not afraid to meet the NRA on neutral ground.

Gosh he's brave. He's willing to show up and shout rapid-fire lies at Barack Obama for an hour? Barry can handle it. Maybe he can bring along a projector and get some backup from a nice young man named Wayne LaPierre, who in 1999 testified before the House Judiciary Committee the NRA thought it was "reasonable to provide mandatory, instant criminal background checks for every sale, at every gun show no loopholes anywhere for anyone."

Obama probably thinks that guy should have a word with this other Wayne LaPierre who keeps warning about "Arrest. Prosecution. Fines. Prison."