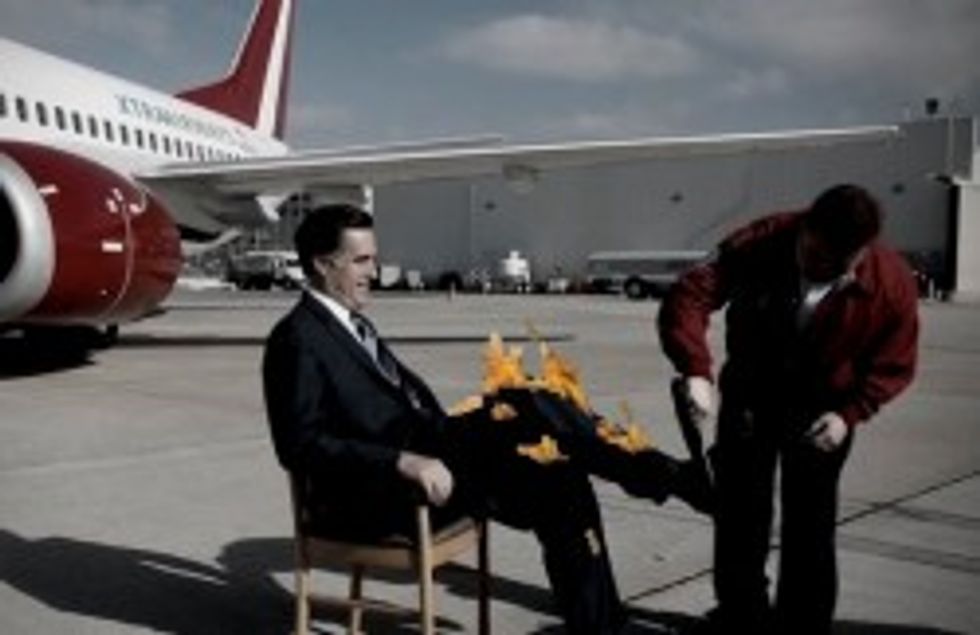 So, you know howWillard Mittingston Wigglesworth Romney IV made a very important foreign policy statement about the murders of American diplomats in Libya, which kind of left even Republican foreign-policy experts gobsmacked at its tone-deaf injection of politics into a developing foreign crisis? Yeah, that thing.

Well, now. Katrina Trinko at NRO's "The Corner" would just like to point out that reporters asking questions about the crazy thing Romney said is the thing that is actually crazy, thank you very much:

So if a presidential candidate gives remarks about a foreign-policy crisis, you’d be forgiven for thinking that in the Q&A held immediately afterward, reporters would ask him about . . . foreign policy. But when Mitt Romney took questions today after talking about the situation in Libya and Egypt, the dominant theme of the questions was all about process and politics. Here are the seven questions asked:

1. Reporter brings up that Romney had a “toughly worded statement last night,” and asks, “Do you regret the tone at all given what we know now?”

2. “Do you think, though, coming so soon after the events really had unfolded over night was appropriate, to be weighing in on this as this crisis was unfolding in real time?” Follow-up: “What did the White House do wrong then, Gov. Romney, if they put out a statement saying they disagreed with it?”

3. “The world is watching. Isn’t this itself a mixed signal when you criticize the administration at a time that Americans are being killed? Shouldn’t politics stop for this?”...

Just look at those insane questions, will you? Clearly, what is insane about them is that they refer to the politically-charged thing Romney said last night, and not to the politically-charged things that Romney just said at his smirktastic press conference, which is quite clearly this morning, and hence a totally different thing. Such silly journalists! Can't they tell the difference between right now and twelve whole hours ago?

Now, it does not strike us as insane that reporters would ask these questions, which also afforded Romney a chance to do the decent thing and walk back his shitty statement, a turd which of course he preferred to polish, not clean up. Also, if the follow-up in question 2 is not about foreign policy, then what is it about? For that matter, isn't a question about "mixed signals" kind of getting at the important foreign policy point Mr. Romney was making when he accused the Obama administration of sending, you know, mixed signals?

In any case, Katrina Trinko would be far happier with the Washington press corps if they would simply learn what is appropriate to ask of whom:

Let political consultants talk about the timing and tone of the statement. The candidate should be grilled on policy, on issues, on what he thinks is the right course going forward, not politics and strategy.

After all, it's not like Mitt Romney's first impulse, in the face of a foreign policy crisis, was to make a political statement. And there's certainly no reason to ask questions about how calling the President's handling of the crisis "disgraceful" might affect the course of that developing crisis. Those are questions for political consultants, in quiet rooms.

Also, too, "The Right Scoop" (or perhaps "the rightscoop;" they use both) has an EXCLUSIVE!!! revealing that journos at the Romney press conference colluded to make sure that "no matter who he calls on we’re covered on the one question." Reporters talking to each other? Egad! This is unprecedented! IMPEACH!!