Nudity And Cannibalism And Whores 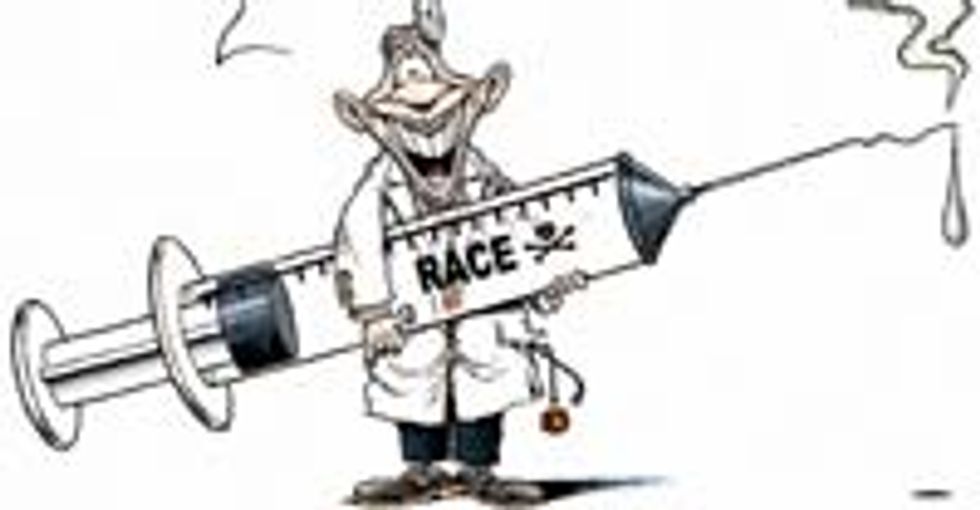 By the Comics Curmudgeon
If Carl Jung were alive today, he'd see political cartoons as a shortcut into our collective subconscious. Those brave few Americans who continue to read newspapers have the honor or seeing the darkest, foulest recesses of the human mind barfed out daily onto editorial pages everywhere. In order to fulfill their appointed role of shocking a jaded nation, the cartoonists select only the most depraved, taboo-violating subjects for their art. What we're trying to say is that this week's cartoons are all about awful stuff, so brace yourself before you click the clicky and see the things in store for you.

What else but our collective sub-brain could have spawned this freakish image, in which Man's highest achievement -- the United States presidency -- is fully mingled with the arboreal realm from which our primitive ancestors emerged millions of years ago? In this fever dream, Barack Obama is transformed into a swaying, graceful tree-being, like the Ents from the Lord of the Rings movies, but black. But while he might look friendly and approachable from afar, and seem defenseless to those who would do him ill, watch out! Get too close and he will literally teabag you to death, in the face, by dropping a grotesquely swollen "nut" onto you.

All this brings up an important point: is depicting Barack Obama as a tree, with rough, brownish bark, racist? It's not a question that would have occurred to anyone before last week, when Jimmy Carter spoke out about racism, which he invented, and which did not exist before Jimmy Carter mentioned it. Anyway, here's a fun fact: did you know that William S. Burroughs didn't publish any novels during the Carter Administration? That's because he spent the entire four years transfixed by a vision of the grotesquely grinning president brandishing an enormous needle, promising endless amounts of smack if Burroughs would only sit calmly and stare directly into his eyes.

Barack Obama is not interested in fulfilling your needs in this way, however. In fact, he's more about the tough medicine! For instance, no longer will the fat, ass-tattooed denizens of Eastern Europe be able to hide behind their so-called "missile shield," which does not currently exist, would not exist for years, and when built would have the same power to protect them from Russian nuclear attack as an actual shower curtain. But now that Obama has so cavalierly cast aside this non-existent future boondoggle, Vladimir Putin can look and laugh at all of their fleshy bits! And then nuke them or whatever.

After the nuking, of course, we'll get to have that war with Russia we've all wanted for so long! Now, you negative nellies are probably viewing that prospect with horror, what with all the wars we're currently fighting and the fact that we don't have enough soldiers to fight them, and isn't Russia, like, bigger? But! There is in fact a huge reserve of military manpower, which is middle-aged suburban dudes who doze off in their chairs while watching the news, and would just love to join the army to fight in all the wars, except their harridan wives won't let them, for some reason. This is absolutely true! It was revealed in this political cartoon, which ran in newspapers, apparently!

With the military manpower crisis solved, Barack Obama was free to dedicate his time to his hobby: consorting with whores. Metaphorical whores! In this case, the "whore" is the National Endowment for the Arts, and Obama is "paying" (paying) it to "fuck" (produce art for) him. Ha ha, it's 2009, and we're somehow talking about the National Endowment for the Arts again, how did that happen? It's also possible that the NEA-whore is the National Educators Association, but in the whore-john relationship between a union and a politician, isn't it usually the other way around? Anyway, Obama is going to screw this dead-eyed artist/teacher silly, for money, is the important thing.

As punishment for his whoremongering, Barack Obama was ritually cooked alive and then eaten, the end. This cartoon is the first cannibalism-themed cartoon in human history in which a guy is being cooked in an enormous pot, and the guy being cooked in black and the guy standing by hungrily is white. This in turn probably means that racism is over forever. Take that, Jimmy Carter!